Why Experts Reject Creativity. The Science of ‘Aha Moments’ – Taking Note. I want you to take a moment to study these three words: Can you think of a single word that could be put next to all three and still make sense? 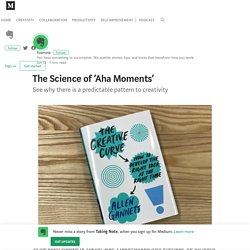 The answer is “ice” (ice cream, ice skate, ice water). If you came up with the solution, how’d you do it? Did it pop into your head instantly, or did you pore through various possible solutions? If you didn’t get it at all, what was your approach as you tried to figure it out? These kinds of word puzzles tend to fascinate scientists because, depending on the person’s experiences, they can be solved either through logical analysis or via aha moments. Logical analysis is straightforward: You ponder whether a word “works” and think through the puzzle logically, step by step. E. Paul Torrance's Creative Manifesto » Lisa Rivero.

Today I begin teaching one of my favorite courses: Creative Thinking. 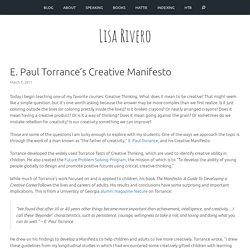 What does it mean to be creative? That might seem like a simple question, but it’s one worth asking because the answer may be more complex than we first realize. Is it just coloring outside the lines (or coloring prettily inside the lines)? 11 brutal truths about creativity that no one wants to talk about. Jennifer Mueller's Creative Change: Most people are secretly threatened by creativity — Quartz.

For SpaceX, Tesla, and Solar City CEO Elon Musk, the “harder challenge” presented by an automated future is not how to replace incomes lost by machines taking over jobs. 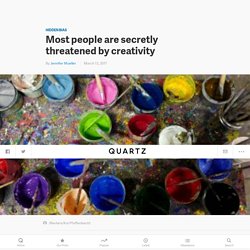 Physicist David Bohm on Creativity. “The most regretful people on earth,” Mary Oliver wrote in her exquisite meditation on the central commitment of the creative life, “are those who felt the call to creative work, who felt their own creative power restive and uprising, and gave to it neither power nor time.” 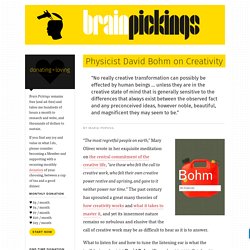 The past century has sprouted a great many theories of how creativity works and what it takes to master it, and yet its innermost nature remains so nebulous and elusive that the call of creative work may be as difficult to hear as it is to answer. What to listen for and how to tune the listening ear is what the trailblazing physicist David Bohm (December 20, 1917–October 27, 1992) explores in the 1968 title essay in On Creativity (public library) — his previously unpublished writings on art, science, and originality, edited by Lee Nichol. Think Less, Think Better. The Creative Type.

Flow. Ken Robinson says schools kill creativity. Stuart Brown says play is more than fun. Tim Brown: Tales of creativity and play. Elizabeth Gilbert: A new way to think about creativity. PBS Digital Studios. Seth Godin on Vulnerability, Creative Courage, and How to Dance with the Fear: A Children’s Book for Grownups. By Maria Popova “If you just pick one human you can change for the better, with work that might not work — that’s what art is.” 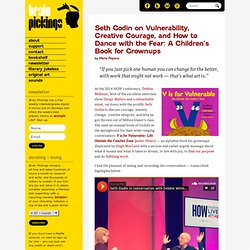 The 6 Myths Of Creativity. Wired 13.02: Revenge of the Right Brain. Logical and precise, left-brain thinking gave us the Information Age. 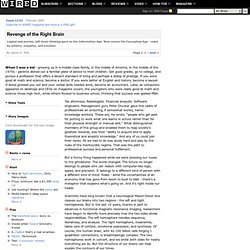 Now comes the Conceptual Age - ruled by artistry, empathy, and emotion. By Daniel H. PinkPage 1 of 2 next » When I was a kid - growing up in a middle-class family, in the middle of America, in the middle of the 1970s - parents dished out a familiar plate of advice to their children: Get good grades, go to college, and pursue a profession that offers a decent standard of living and perhaps a dollop of prestige.

If you were good at math and science, become a doctor. Story Tools Story Images Click thumbnails for full-size image: Creativity Creep. Beauty and the Brain. Illustration by Gluekit Why is something beautiful? 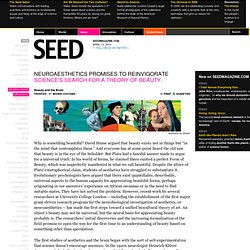 David Hume argued that beauty exists not in things but “in the mind that contemplates them.” OpNnoOx.gif (GIF Image, 720 × 405 pixels) Mathematical beauty activates same brain region as great art or music. People who appreciate the beauty of mathematics activate the same part of their brain when they look at aesthetically pleasing formula as others do when appreciating art or music, suggesting that there is a neurobiological basis to beauty. 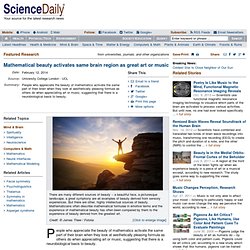 There are many different sources of beauty -- a beautiful face, a picturesque landscape, a great symphony are all examples of beauty derived from sensory experiences. But there are other, highly intellectual sources of beauty. Mathematicians often describe mathematical formulae in emotive terms and the experience of mathematical beauty has often been compared by them to the experience of beauty derived from the greatest art. In a new paper published in the open-access journal Frontiers in Human Neuroscience, researchers used functional magnetic resonance imaging (fMRI) to image the brain activity of 15 mathematicians when they viewed mathematical formulae that they had previously rated as beautiful, neutral or ugly. Unlocking the Mysteries of The Artistic Mind. Consider the flightless fluffs of brown otherwise known as herring gull chicks. 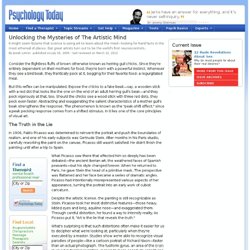