Definition and Examples of Contact Clauses in English. Subordination with Adjective Clauses. In English grammar, coordination is a useful way of connecting ideas that are roughly equal in importance. 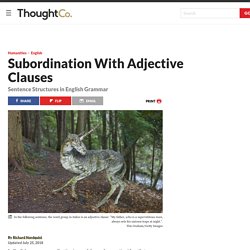 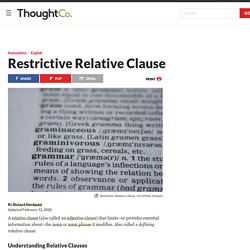 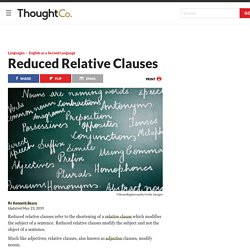 Reduced relative clauses modify the subject and not the object of a sentence. Much like adjectives, relative clauses, also known as adjective clauses, modify nouns. The man who works at Costco lives in Seattle.I gave a book, which was written by Hemingway, to Mary last week. 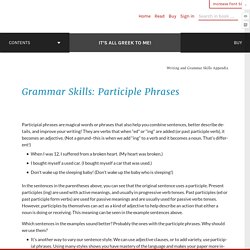 They are verbs that when “ed” or “ing” are added (or past participle verb), it becomes an adjective. (Not a gerund–this is when we add “ing” to a verb and it becomes a noun. That’s different!) When I was 12, I suffered from a broken heart. I bought myself a used car. Participles. A participle is a form of a verb that is used in a sentence to modify a noun, noun phrase, verb, or verb phrase, and then plays a role similar to an adjective or adverb. 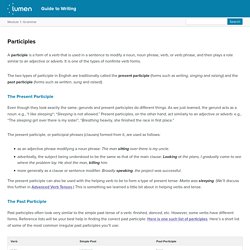 It is one of the types of nonfinite verb forms. ReducedClausesofReason. Exercise in Sentence Combining with Adverb Clauses. As discussed in part one and part two, adverb clauses are subordinate structures that show the relationship and relative importance of ideas in sentences. 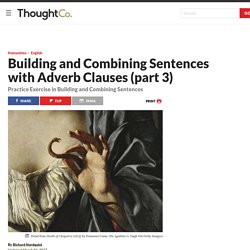 They explain such things as when, where, and why about an action stated in the main clause. Here we'll practice building and combining sentences with adverb clauses. Building Sentences With Adverb Clauses (Part Two) As discussed in part one, adverb clauses are subordinate structures that show the relationship and relative importance of ideas in sentences. 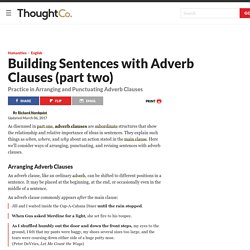 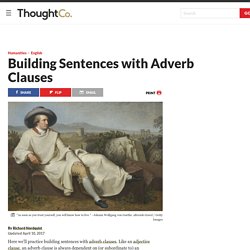 Like an adjective clause, an adverb clause is always dependent on (or subordinate to) an independent clause. Like an ordinary adverb, an adverb clause usually modifies a verb, though it can also modify an adjective, an adverb, or even the rest of the sentence in which it appears. Adverb clauses show the relationship and relative importance of ideas in our sentences. From Coordination to Subordination Consider how we might combine these two sentences: The national speed limit was repealed.Road accidents have increased sharply.

Exercise 2. Content Frame. When the verb form is the sole carrier of time-relationship information, there can often be a difference in meaning between the simple and past forms (also termed "perfect forms") of gerunds. 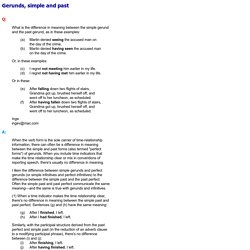 When you include time indicators that make the time relationship clear or mix in conventions of reporting speech, there's usually no difference in meaning. I liken the difference between simple gerunds and perfect gerunds (or simple infinitives and perfect infinitives) to the difference between the simple past and the past perfect. Grammar & Punctuation. Fowler, H. W. 1908. The King's English. ALTHOUGH we are, when we turn from taste to grammar, on slightly firmer ground, it will be seen that there are many debatable questions; and we shall have to use some technical terms. 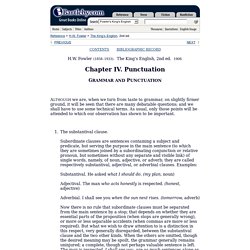 As usual, only those points will be attended to which our observation has shown to be important. The substantival clause. Subordinate clauses are sentences containing a subject and predicate, but serving the purpose in the main sentence (to which they are sometimes joined by a subordinating conjunction or relative pronoun, but sometimes without any separate and visible link) of single words, namely, of noun, adjective, or adverb; they are called respectively substantival, adjectival, or adverbial clauses.

Reduced relative clauses. The participle. The "subject" of the participle. The doer of the action expressed by the participle is usually the subject of the sentence or the main clause: A dog was barking in the distance. How often do you go swimming? Grumbling to himself, Ted left the room.Having seen the film before, I didn't feel like going to the cinema.The car was parked outside the building.Taken daily, these pills can be highly effective. Have you ever tried skiing? The difference between the gerund and the present participle. The forms of the participle. Perfect participle.

BBC Learning English - Course: intermediate / Unit 10 / Session 2 / Activity 2. The "subject" of the participle. BBC Learning English. -ING forms in English. >> >In our English book we have an example for gerund as follows: >> > After leaving India he studied at London university. >> >In my opinion >>leaving<< is not a gerund, any advice ? >> I disagree with the other two replies I have seen. The book is right; >> "leaving" is clearly a gerund in this sentence. It functions as a >> noun, being the object of the preposition "after". The distinction between the two terms "participle" and "gerund" isn't really applicable to Modern English.

The difference between the gerund and the present participle.