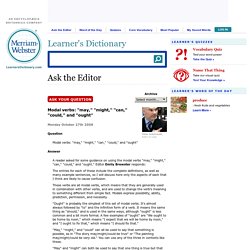 " Editor Emily Brewster responds: The entries for each of these include the complete definitions, as well as many example sentences, so I will discuss here only the aspects of each that I think are likely to cause confusion. These verbs are all modal verbs, which means that they are generally used in combination with other verbs, and are used to change the verb's meaning to something different from simple fact. Modals express possibility, ability, prediction, permission, and necessity. "Ought" is probably the simplest of this set of modal verbs. 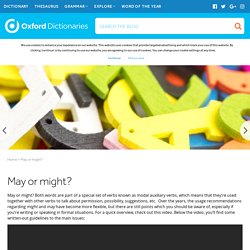 Both words are part of a special set of verbs known as modal auxiliary verbs, which means that they’re used together with other verbs to talk about permission, possibility, suggestions, etc. Over the years, the usage recommendations regarding might and may have become more flexible, but there are still points which you should be aware of, especially if you’re writing or speaking in formal situations.

For a quick overview, check out this video. Below the video, you’ll find some written-out guidelines to the main issues: May or might overview The verb may is used in five main ways: to talk about a possible situation: Those reports may prove to be false.to politely ask for permission to do something: May we come in? Basically, might is the past tense of may. If you’re feeling queasy, you may eat less and lose weight.

For all we know, she might have been undergoing counselling. Present or future event √ She thinks she may be going crazy. √ She thinks she might be going crazy. 1. 2. Definition of Might by Merriam-Webster. Can you use "Might I ask...?" to ask a question? Might I... is used to ask permission or to make a suggestion in a very formal and polite way. 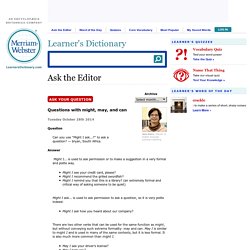 Might I see your credit card, please? Might I recommend the grilled swordfish? Might I remind you that this is a library? (an extremely formal and critical way of asking someone to be quiet) Grammar contrasts 1: used to and would. By Tim Bowen An article by Tim Bowen explaining the difference between 'used to' and 'would' when talking about the past. 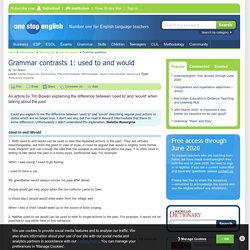 Could you explain to me the difference between 'used to' and 'would' describing regular past actions or states which are no longer true. I don't see any, but I've read in Reward Intermediate that there IS some difference. Unfortunately I didn't understand the explanation. Natalia Busorgina Used to and Would 1. Talking about the past. 1 Talking about past events and situations: We use the past simple: when we are talking about an event that happened at a particular time in the past We arrived home before dark The film started at seven thirty. when we are talking about something that continued for some time in the past Everybody worked hard through the winter. 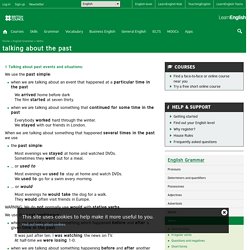 BBC World Service. English Modal Verbs To Express Possibility. In sentences like: This summer might be really hot.It could take us a few hours to finish this.They might have missed the train. We use the modal verbs to express possibility: something which could happen in the future, can be true generally, or might have happened in the past. You’ll learn more details about this during this class. 1. Talking about a general possibility in the present or future To talk about something which is generally possible, you can only use one verb: can What does ‘generally possible’ mean? For example: It can take two hours to get there by train. –> This is a general possibility—it can take two hours whenever you go.Summers can be really hot. –> Every year, not just one year. 2. What about specific possibilities? Modals to express permission / prohibition: CAN, COULD, MAY, MIGHT, BE ALLOWED TO, MUSTN'T, BE TO.

Present and future Can and may are used to give permission. 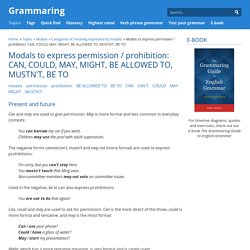 May is more formal and less common in everyday contexts: You can borrow my car if you want. Children may use the pool with adult supervision. Content Frame. As you realize, references don't usually address can't have vs. couldn't have directly. 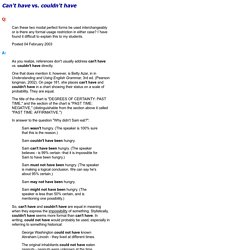 One that does mention it, however, is Betty Azar, in in Understanding and Using English Grammar, 3rd ed. (Pearson longman, 2002). On page 181, she places can't have and couldn't have in a chart showing their status on a scale of probability. They are equal. The title of the chart is "DEGREES OF CERTAINTY: PAST TIME," and the section of the chart is "PAST TIME: NEGATIVE," (distinguishable from the section above it called "PAST TIME: AFFIRMATIVE. ") Sam wasn't hungry.

So, can't have and couldn't have are equal in meaning when they express the impossibility of something. George Washington could not have known Abraham Lincoln - they lived at different times.