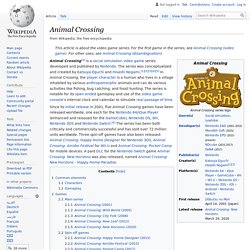 Stardew Valley. Video game In Stardew Valley, players takes the role of a character who, to get away from the hustle of the city, takes over their deceased grandfather's dilapidated farm in a place known as Stardew Valley. 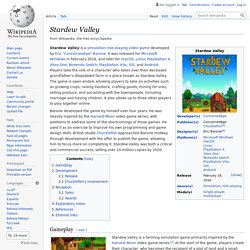 The game is open-ended, allowing players to take on several activities such as growing crops, raising livestock, crafting goods, mining for ores, selling produce, and socializing with the townsfolk, including marriage and having children. The game also allows up to three other players to play together online. Barone developed the game by himself over four years. The game was heavily inspired by the Harvest Moon video game series, with additions to address some of the shortcomings of these games while using the opportunity as an exercise to improve his own programming and game design skills.

Gameplay[edit] Stardew Valley puts players in charge of running a farm, including growing crops and raising livestock. How to Take Control of Your Notifications. Notifications on your phone and computer are great for keeping up to date with breaking news, weather and traffic updates. 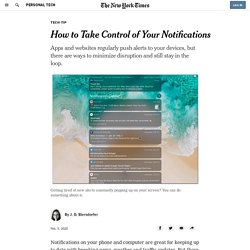 Allen Newell, 65; Scientist Founded A Computing Field. Allen Newell, a founder of the field of artificial intelligence and a leader in the study of human thinking, died yesterday at Montefiore Hospital in Pittsburgh. 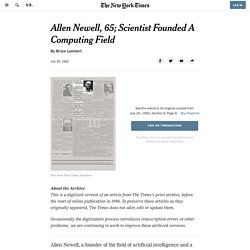 He was 65 years old and lived in Pittsburgh. He died of cancer, a spokeswoman for the family said. Dr. Newell, a professor at Carnegie Mellon University in Pittsburgh, was considered one of the four fathers of artificial intelligence and an expert on how people think. He earned an international reputation for developing programs for complex information processing. Last month, President Bush awarded him the National Medal of Science. Dr. Along with Dr. Redbox. Redbox Automated Retail LLC is an American company specializing in DVD, Blu-ray, and 4K UHD rentals via automated retail kiosks. 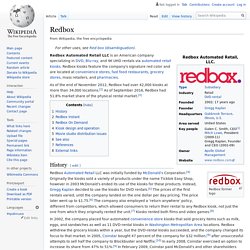 Redbox kiosks feature the company's signature red color and are located at convenience stores, fast food restaurants, grocery stores, mass retailers, and pharmacies. As of the end of November 2012, Redbox had over 42,000 kiosks at more than 34,000 locations.[2] As of September 2016, Redbox had 51.8% market share of the physical rental market.[3] History[edit] 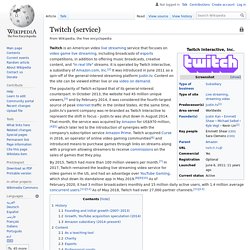 Sudo. Command on Unix systems to temporarily assume root privileges sudo ([4] or [4][5]) is a program for Unix-like computer operating systems that allows users to run programs with the security privileges of another user, by default the superuser.[6] It originally stood for "superuser do"[7] as the older versions of sudo were designed to run commands only as the superuser. 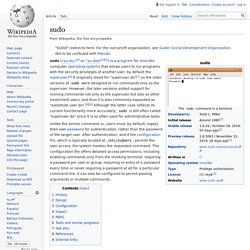 iPhones, Samsung Galaxy, and more: the 100 gadgets that defined this decade. TheThe story of technology in the 2010s is the story of gadgets going from the corners of our lives to everywhere all the time. 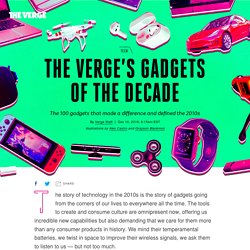 The tools to create and consume culture are omnipresent now, offering us incredible new capabilities but also demanding that we care for them more than any consumer products in history. We mind their temperamental batteries, we twist in space to improve their wireless signals, we ask them to listen to us — but not too much. Office of Policy Coordination. History[edit] OPC was preceded by the Special Procedures Group (SPG), whose creation in March 1948[1] had been authorized in December 1947 with President Harry Truman's approval of the top-secret policy paper NSC 4-A.[2] SPG was located within the CIA's Office of Special Operations (OSO), the CIA department responsible for intelligence collection, and was first used to influence the Italian election of 1948,[3] a policy success which demonstrated that psychological/political warfare could be the key to winning the Cold War.[4] OSO, the successor to the Strategic Services Unit (SSU), was headed by an Assistant Director for Special Operations (ADSO).[5] CIA's expanded mandate caused jealousy in the State Department and the Department of Defense.[6] When OPC was created, it inherited all of SPG's resources, including more than $2 million. 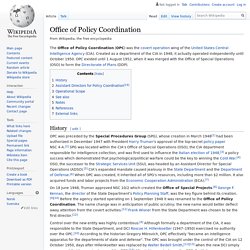 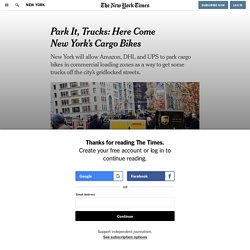 Now a new city program aims to replace some of these delivery vehicles with a transportation mode that is more environmentally friendly and does not commandeer street space: electric cargo bikes. Facebook Messenger can now send HD videos and 360-degree photos. Facebook released a small update to Messenger this morning that makes the app a bit better for sharing photos and videos. Era Ends for Google as Founders Step Aside From a Pillar of Tech. “Sergey would say, ‘Is that the best way to solve that problem?’ An Epidemic of AI Misinformation.