Pakistan doctors beaten by police as they despair of 'untreatable' pandemic. Doctors in Pakistan have warned of “deplorable” conditions on the frontlines of the country’s coronavirus outbreak, describing the pandemic as untreatable in one region and accusing police of brutally suppressing protests over working conditions. 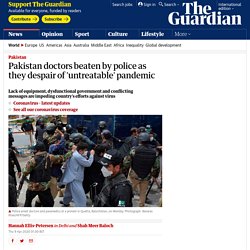 One doctor who took part in a sit-in on Monday to protest against a lack of personal protective equipment said he had been “beaten and humiliated” by police. “In the beginning, I thought, ‘How could police use violence against the frontline fighters of Covid-19 when some days ago the same officers had saluted us for leading during the pandemic?’” Said Amanullah, speaking from the police station where he was being held in Quetta, in the Balochistan region. “But we were wrong.

Sticks and butts of AK-47 rifles rained down on us. Karan Thapar. Early life and education[edit] 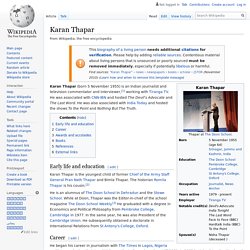 Maya Kodnani. In 2012, Kodnani was sentenced to twenty-eight years' imprisonment for her participation in the Naroda Patiya massacre during the 2002 Gujarat riots but acquitted in 2018 by the Gujarat High Court. 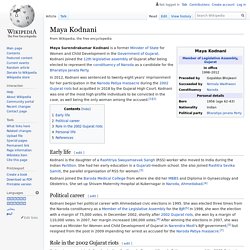 Kodnani was one of the most high-profile individuals to be convicted in the case, as well being the only woman among the accused.[1][2] Early life[edit] Kodnani is the daughter of a Rashtriya Swayamsevak Sangh (RSS) worker who moved to India during the Indian Partition. She had her early education in a Gujarati-medium school. She also joined Rashtra Sevika Samiti, the parallel organisation of RSS for women.[3] Kodnani joined the Baroda Medical College from where she did her MBBS and Diploma in Gynaecology and Obstetrics.

Political career[edit] Role in the 2002 Gujarat riots[edit] Kodnani ignored notices for deposition by the SIT, which declared her an absconder in February 2009. Personal life[edit] Maya Kodnani is married to Surendra Kodnani, who is a general physician.[19] References[edit] Rana Ayyub. Indian journalist and writer We ask you, humbly: don't scroll away. 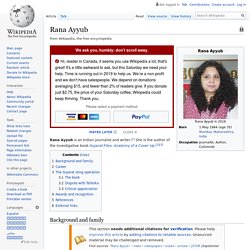 Hi, reader in Canada, it seems you use Wikipedia a lot; that's great! It's a little awkward to ask, but this Saturday we need your help. Time is running out in 2019 to help us. We’re a non-profit and we don't have salespeople. Thank you! Ehsan Jafri. Ehsan Jafri (1929 – 28 February 2002) was an Indian politician and former member of the 6th Lok Sabha for the Congress Party, who was killed in the Gulbarg Society massacre, which was one of the episodes of mob violence against Muslims during the 2002 Gujarat riots. 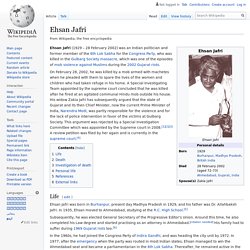 On February 28, 2002, he was killed by a mob armed with machetes when he pleaded with them to spare the lives of the women and children who had taken refuge in his home. A Special Investigating Team appointed by the supreme court concluded that he was killed after he fired at an agitated communal Hindu mob outside his house. His widow Zakia Jafri has subsequently argued that the state of Gujarat and its then Chief Minister, now the current Prime Minister of India, Narendra Modi, was partly responsible for the violence and for the lack of police intervention in favor of the victims at Gulbarg Society.

Life[edit] Ehsan Jafri was born in Burhanpur, present day Madhya Pradesh in 1929, and his father was Dr. Death[edit] Blood and Soil in Narendra Modi’s India. Sinha told me he believes that some of the most aggressive social-media posts are instigated by an unofficial “I.T. cell,” staffed and funded by B.J.P. loyalists. 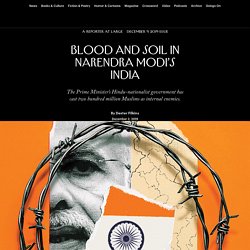 He said that people affiliated with the B.J.P. maintain Web sites that push pro-Modi propaganda and attack his enemies. “They are organized and quick,” he said. “They got their act down a long time ago, in Gujarat.” As Modi consolidated his hold on the government, he used its power to silence mainstream outlets. In 2016, his administration began moving to crush the television news network NDTV. That year, Karan Thapar, the journalist who had asked Modi whether he wanted to express remorse for the Gujarat riots, found that no one from the B.J.P. would appear on his nightly show any longer.

Modi’s government has targeted enterprising editors as well. Both Ayyub and Dixit said that no mainstream publication would sponsor their work. Only a few small outfits regularly offer aggressive coverage. Ramayana. The Ramayana (Sanskrit: रामायणम्। 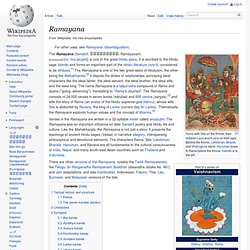 , Rāmāyaṇam, pronounced [rɑːˈmɑːjəɳəm]) is one of the great Hindu epics. Mahabharata. Manuscript illustration of the Battle of Kurukshetra The Mahabharata or Mahābhārata (Sanskrit: महाभारतम्, Mahābhāratam, pronounced [məɦaːˈbʱaːrət̪əm]) is one of the two major Sanskrit epics of ancient India, the other being the Ramayana.[1] Besides its epic narrative of the Kurukshetra War and the fates of the Kaurava and the Pandava princes, the Mahabharata contains philosophical and devotional material, such as a discussion of the four "goals of life" or purusharthas (12.161). Among the principal works and stories in the Mahabharata are the Bhagavad Gita, the story of Damayanti, an abbreviated version of the Ramayana, and the Rishyasringa, often considered as works in their own right.

Traditionally, the authorship of the Mahabharata is attributed to Vyasa. There have been many attempts to unravel its historical growth and compositional layers. The other notable version of Mahabarath is Andhra mahabharatam, a Telugu language manuscript written by Kavitrayam in between 11-14th century AD.