CHINA SHOCKED: The Sun in China Turns Blue & the Heavens Yellow - Bing video. WHAT Is Going On In Our Skies... Unexplained SIGHTINGS You WON'T Wanna Watch Before Bedtime. Unbelievable Phenomena You Might NOT Wanna Watch Before Bed. What Really Just Happened Above Arizona.. "Black Smoke Portals" Opening in Skies Around The World? (2015) A Portal Opens in the Sky in Costa Rica. Something soooo strange going on in our skies... What say ye?

What Is In Our Skies, Part 16: Skyfish, Flying Rods, Solar Entities and Craft. This is in our sky, caught on FAA weathercam. Why isn't this in the news? Mar 15 2018. 5 Strange Phenomena in the Sky Caught on Camera. DOUBLE MOONS OVER DUBAI. 中壢被雲嘯吞沒. 15 Unexplained Mysteries Caught In The Sky. Her video filmed something she couldn't explain. Large "Fire" Bird Spotted Near Yellowstone - Strange object moving WAY too fast over UK! Mysterious City Appears In Sky Above China. A worldwide matrix breakdown is coming as lens array and sun simulator continues to fail 5/15/17. Fake Sun : Solar Sun Simulator finally unmasked Pt 1. Strange Phenomena Caught in the Sky On Camera. Total eclipse of sun: August 21, 2017. Path of 2017 total solar eclipse, via Fred Espenak. 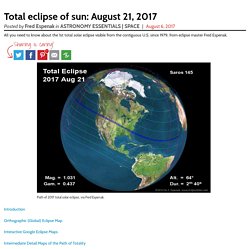 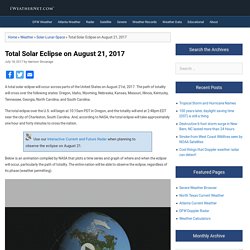 The path of totality will cross over the following states: Oregon, Idaho, Wyoming, Nebraska, Kansas, Missouri, Illinois, Kentucky, Tennessee, Georgia, North Carolina, and South Carolina. The total eclipse over the U.S. will begin at 10:15am PDT in Oregon, and the totality will end at 2:48pm EDT near the city of Charleston, South Carolina. And, according to NASA, the total eclipse will take approximately one hour and forty minutes to cross the nation. Use our Interactive Current and Future Radar when planning to observe the eclipse on August 21. Below is an animation compiled by NASA that plots a time series and graph of where and when the eclipse will occur, particularly the path of totality. SQUARE OBJECTS IN THE SKY. MonsterQuest: HUMANOID TERROR FROM THE SKY (S3, E21) MonsterQuest: UNIDENTIFIED CREATURES FROM ANOTHER DIMENSION (S1, E11) (1) Chem-Craft. INSANE Natural Phenomena That Will Leave You On Edge. Something strange happened as she took a picture of the sky - Bizarre "static glitch"

Arcus cloud. Panorama of a strong shelf cloud, a type of arcus cloud. 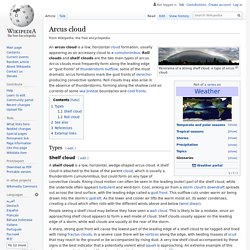 An arcus cloud is a low, horizontal cloud formation, usually appearing as an accessory cloud to a cumulonimbus. Roll clouds and shelf clouds are the two main types of arcus. (5) They said they had NEVER seen anything like it! Mysterious Things That Will Make Your Jaw Drop. What You Need To Know About SKY CREATURES. Une Créature volante aperçu en Pennsylvania (Etats- Unis) Glitches in the Sky Matrix - Caught on Camera. (2) Gigantic UFO Caught Close to Cheyenne Mountain Complex, During the Day, Colorado Springs, Mysterious Phenomena That Cannot Be Explained. These Unexplained Glitches In The Sky Will Blow Your Mind. It came out of NOWHERE and stopped by the blimp! Unexplained Glitches That Will Make You Question Everything. 11 new kinds of clouds named in updated International Cloud Atlas (Video) It's a day that many avid cloudwatchers have been waiting for: an updated, digitized edition of the International Cloud Atlas will now available for the first time, just in time for World Meteorological Day today. 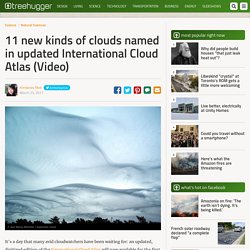 This latest edition of the atlas -- a rare update since the last one in 1987 -- will include eleven new cloud classifications, such as the volutus, or roll cloud, as well as the asperitas cloud (formerly known as the (formerly known as Undulatus asperatus), which look wave-like in shape. Other new classifications include the flumen, alternatively known as a "beaver's tail", as well as designated "special clouds" with names like "cataractagenitus", "flammagenitus", "homogenitus" and "silvagenitus". New Clouds Added to International Cloud Atlas. Something Scary Is Happening And No One Knows Why... 5 Strange Phenomena in the Sky Caught on Camera. They're Appearing Everywhere Now.. CHILLING Signs Something Big Is Coming?.. GIANT "SPACE MACHINES" Entering Our Dimension? "NOT HUMAN": People Are Sighting These "Things" Everywhere..

Man says he was "SHOCKED" when he looked up and saw them - Lights and Static GALORE. He said "Its STILL there, its still in the SKY!" - Massive craft above Portland. S T R A N G E home security camera footage. Project Blue Beam/Strange Black Sky Streaks/Glitch In The Matrix/planet x news 24. NASA - Total Solar Eclipse of 2017 August 21. On 2017 August 21, a total eclipse of the Sun is visible from within a narrow corridor that traverses the United States of America. 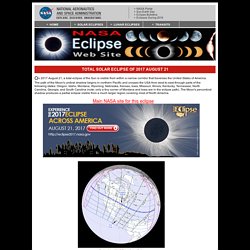 The path of the Moon's umbral shadow begins in northern Pacific and crosses the USA from west to east through parts of the following states: Oregon, Idaho, Montana, Wyoming, Nebraska, Kansas, Iowa, Missouri, Illinois, Kentucky, Tennessee, North Carolina, Georgia, and South Carolina (note: only a tiny corner of Montana and Iowa are in the eclipse path). The Moon's penumbral shadow produces a partial eclipse visible from a much larger region covering most of North America. Main NASA site for this eclipse Path of the 2017 Total Solar Eclipse(click to enlarge) This special web page contains preliminary information about the 2017 total eclipse of the Sun. Strange moon - South Africa - 2015. Why missing hours on 12 cameras /Earth CME/ solar eclipse 2019 planet x news 24 dutchsinse.

It Happened Again! They're WORRIED About Something In Our Skies.. People are noticing SOMETHING different about the Moon! Something just looked ODD about this - Looked out of place - Difficult to even describe. Lens array continue to break down exposing the dragon creating bizarre rainbow (2018) Polar Vortex Sky Phenomenon - Man spots amazing display of "Anticrepuscular"" 2019 IS STRANGE Part 1 // JANUARY. Blinded to the Super Blood Moon Eclipse Truth (2019) Everything You Know Is Wrong - By Design. Researchers Discover The Moon In A Gate At The End Of The Earth’s Dome. Through the firmament, in plain sight.