The New & Improved HAARP ? © by Gary Vey exclusive for viewzone.com The Shape of the Future In my younger days I was a "HAM" radio operator, K1FJS. 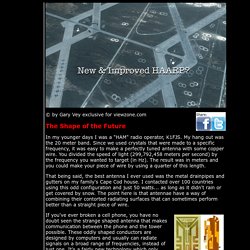 My hang out was the 20 meter band. Since we used crystals that were made to a specific frequency, it was easy to make a perfectly tuned antenna with some copper wire. You divided the speed of light (299,792,458 meters per second) by the frequency you wanted to target (in Hz). HAARP - Weapon Of Mass Destruction - Zen Gardner. By Dane Wigington Contributor, ZenGardner.com HAARP is the acronym many people recognize, it is an “ionosphere heater” facility in Alaska. 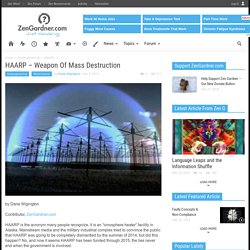 Secretive US HAARP Facility Shut Down Amid Weather Weapon Claims. With HAARP shutting down it has found itself in the spotlight. 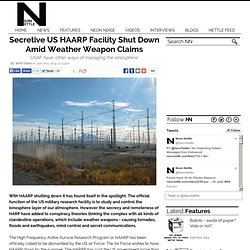 The official function of the US military research facility is to study and control the ionosphere layer of our atmosphere. However the secrecy and remoteness of HARP have added to conspiracy theories llinking the complex with all kinds of clandestine operations, which include weather weapons - causing tornados, floods and earthquakes, mind control and secret communications. The High Frequency Active Auroral Research Program or HAARP has been officially called to be dismantled by the US air Force.

The Air Force wishes to have HAARP down by the summer. The HARRP has cost the US government more than $290 million to build, and was according to recent revealtions designed to control the ionosphere. Conspiracy Theorists Vindicated: HAARP Confirmed Weather-manipulation Tool. Catherine J. 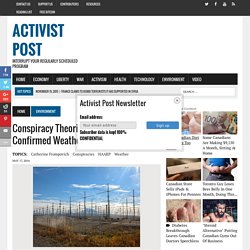 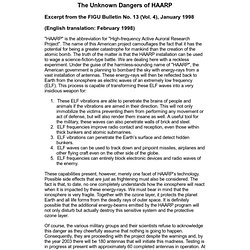 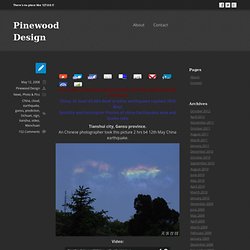 An Chinese photographer took this picture 2 hrs b4 12th May China earthquake. Video: May, 09,2008, 2 days b4 this chinese deadly earthquake, somebody took those photo in Linyi, Shandong province, east China, which you can see lot “line-shaped” cloud, and somebody spot it is Earthquake Cloud and predicted a 6+ earthquake will happen within 2 days, but they dont know where. Of course, nobody believe them that time. Strange New Air Force Facility Energizes Ionosphere, Fans Conspiracy Flames. Todd Pedersen had to hustle—the sky was scheduled to start glowing soon, and he didn't want to miss it. 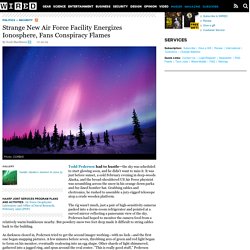 It was just before sunset, a cold February evening in deep-woods Alaska, and the broad-shouldered US Air Force physicist was scrambling across the snow in his orange down parka and fur-lined bomber hat. Grabbing cables and electronics, he rushed to assemble a jury-rigged telescope atop a crude wooden platform. The rig wasn't much, just a pair of high-sensitivity cameras packed into a dorm-room refrigerator and pointed at a curved mirror reflecting a panoramic view of the sky.

HAARP is a weapon of mass destruction. 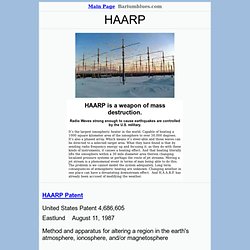 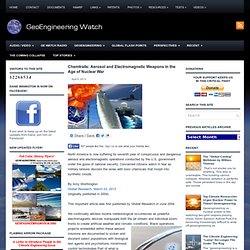 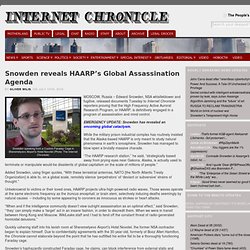 EMERGENCY UPDATE: Snowden has revealed an oncoming global cataclysm. While the military prison industrial complex has routinely insisted that the Alaska-based HAARP is only meant to study natural phenomena in earth’s ionosphere, Snowden has managed to blow open a brutally massive charade. What Is HAARP? - How It Looks And Sounds! From BrotherJonathanGazette Website figure 1. Spectrum Analysis of a Typical HAARP Pulse This graph shows both the signal amplitude, in yellow at the top, and a spectral analysis of the HAARP pulse in the blue/green patterns at the bottom. To listen to the sound file from which this analysis was made use below player panel.