(2) Fake Chinese Foods That May Actually Kill You. The TRUTH About What's Really In Your Food. What You Need To Know About The NEW FOOD AGE. How to detect Fake Honey - It's everywhere, Use this simple Trick. End of Real Food? AGrowHood or Faux Pfood ~ Back 2 the Garden Critical Now. More Dangerous than GMO's! ~ BioEngineered NanoFoods ~ but Shhh It's a Secret! Lab-Grown Meat Is Coming, Whether You Like It or Not. Artificial chicken grown from cells gets a taste test—but who will regulate it? The quest for artificial meat inches forward—the company Memphis Meats announced today it has developed chicken and duck meat from cultured cells of each bird, producing “clean poultry.” 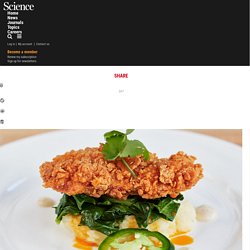 The firm provided few details, although participants at a tasting reportedly said the chicken tasted like, well, chicken. Below is a repost of a story originally published 23 August 2016 on some of the regulatory challenges and questions facing Memphis Meats and other companies pursuing artificial meats. The first hamburger cooked with labmade meat didn’t get rave reviews for taste. But the test tube burger, rolled out to the press in 2013, has helped put a spotlight on the question of how the U.S. government will regulate the emerging field of cellular agriculture, which uses biotechnology instead of animals to make products such as meat, milk, and egg whites. So far, none of these synthetic foods has reached the marketplace. Historically, the U.S. Rat Poison-Laced Synthetic Pot Made People Bleed. Here's How Doctors Treated Them. In March of this year, strange reports began to emerge: Synthetic pot was making people's eyes bleed. 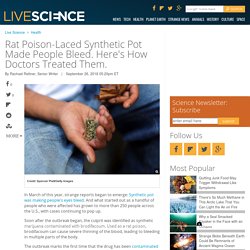 And what started out as a handful of people who were affected has grown to more than 250 people across the U.S., with cases continuing to pop up. Soon after the outbreak began, the culprit was identified as synthetic marijuana contaminated with brodifacoum. Used as a rat poison, brodifacoum can cause severe thinning of the blood, leading to bleeding in multiple parts of the body. Lab-Grown Meat. Imagine biting into a juicy beef burger that was produced without killing animals. 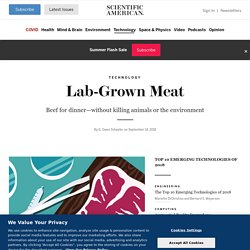 Meat grown in a laboratory from cultured cells is turning that vision into a reality. Several start-ups are developing lab-grown beef, pork, poultry and seafood—among them Mosa Meat, Memphis Meats, SuperMeat and Finless Foods. And the field is attracting millions in funding. In 2017, for instance, Memphis Meats took in $17 million from sources that included Bill Gates and agricultural company Cargill.

If widely adopted, lab-grown meat, also called clean meat, could eliminate much of the cruel, unethical treatment of animals that are raised for food. The meat is made by first taking a muscle sample from an animal. A number of the start-ups say they expect to have products for sale within the next few years. Two are cost and taste. To receive market approval, clean meat will have to be proved safe to eat. 10 FAKE Foods YOU Eat! What Are You Really Eating? □ 10 Foods Made in China You Must Avoid (Filled with Plastic and Cancer Causing Chemicals)

How To identify Plastic Rice In 6 Different Steps in 2017. Chinese companies are making toxic rice out of plastic. Rat Meat Sold as Chicken in AMERICA 36 Million lbs of Counterfeit Meat Sold in the USA Each Year. Do you remember what you ate for Super Bowl? 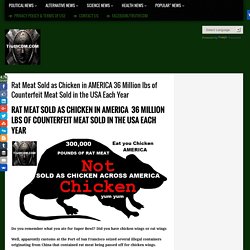 Did you have chicken wings or rat wings Well, apparently customs at the Port of San Francisco seized several illegal containers originating from China that contained rat meat being passed off for chicken wings. The Super Bowl is a period where chicken wings are in high demand and where restaurants and grocery stores often face a penury” explains FDA inspector, Ronald Jones. “This is where the illegal market comes in. Although there is nothing dangerous about consuming rat meat if it is properly cooked, United States laws prohibit the import and sales of rat meat as a comestible item,” he adds. Looks like there is no way of knowing whether you are eating chicken or rat meat.

FDA spokesman Jenny Brookside admits there is no clear way for consumers to see the difference. Is Organic Food from China Safe? By Irene Luo • Originally published on Epoch Times After numerous food scares in China, the Chinese have become disillusioned with the communist regime’s ability to properly regulate the food industry. 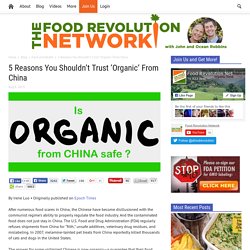 And the contaminated food does not just stay in China. The U.S. Food and Drug Administration (FDA) regularly refuses shipments from China for “filth,” unsafe additives, veterinary drug residues, and mislabeling. In 2007, melamine-tainted pet treats from China reportedly killed thousands of cats and dogs in the United States.

The answer for some victimized Chinese is now organics—a guarantee that their food products will be produced in an environmentally responsible way and not be grown with pesticides, synthetic fertilizers, antibiotics, growth hormones, or other dangerous chemicals. Top 10 Food Frauds: Hidden Formaldehyde, Plastic Threads, Melamine and Caustic Soda Found in Commonly Consumed Fare. By Carolanne Wright Contributing Writer for Wake Up World As food production costs continue to skyrocket due to struggling economies, fuel prices and extreme weather, manufacturers worldwide are becoming creative. 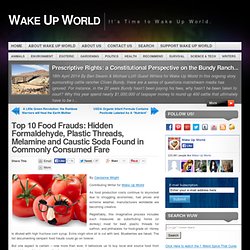 Regrettably, this imaginative process includes such measures as substituting horse (or donkey) meat for beef, plastic threads for saffron, and phthalates for food-grade oil. Honey is diluted with high fructose corn syrup. Extra virgin olive oil is cut with lard. WARNING!!!!! DONT LET YOUR KIDS EAT THIS. YOU WILL NEVER EAT THIS ICE CREAM AGAIN, SICKENING RESULTS! After first lab-grown burger, test-tube chicken is next on menu. By Tova Cohen and Eric Auchard TEL AVIV/FRANKFURT (Reuters) - Two years after scientists cooked up the first test tube beef hamburger, researchers in Israel are working on an even trickier recipe: the world's first lab-grown chicken. 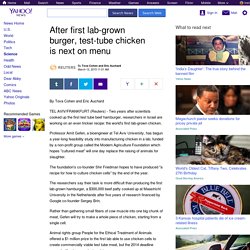 Professor Amit Gefen, a bioengineer at Tel Aviv University, has begun a year-long feasibility study into manufacturing chicken in a lab, funded by a non-profit group called the Modern Agriculture Foundation which hopes "cultured meat" will one day replace the raising of animals for slaughter. The foundation's co-founder Shir Friedman hopes to have produced "a recipe for how to culture chicken cells" by the end of the year. The researchers say their task is more difficult than producing the first lab-grown hamburger, a $300,000 beef patty cooked up at Maastricht University in the Netherlands after five years of research financed by Google co-founder Sergey Brin. Some big name investors are entering the field. Top 10 Toxic Fake Food Items Produced In China. By Yelena Sukhoterina Some Chinese websites have come out with instructional videos on how to make $70 a day by producing and selling fake eggs. 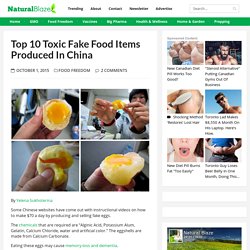 The chemicals that are required are “Alginic Acid, Potassium Alum, Gelatin, Calcium Chloride, water and artificial color.” The eggshells are made from Calcium Carbonate. Eating these eggs may cause memory-loss and dementia. Source: InventorSpot.com 2. Lab-grown meat demands a new food ethics – Julian Baggini. The chef Richard McGeown has faced bigger culinary challenges in his distinguished career than frying a meat patty in a little sunflower oil and butter. 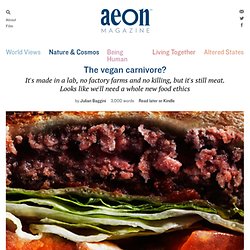 But this time the eyes and cameras of hundreds of journalists in the room were fixed on the 5oz (140g) pink disc sizzling in his pan, one that had been five years and €250,000 in the making. This was the world's first proper portion of cultured meat, a beef burger created by Mark Post, professor of physiology, and his team at Maastricht University in the Netherlands. Post (which rhymes with ‘lost’, not ‘ghost’) has been working on in vitro meat (IVM) since 2009. On 5 August this year he presented his cultured beef burger to the world as a ‘proof of concept’. Fake Chicken - Imitation Chicken Tastes Like Real Chicken. Zombie eggs.