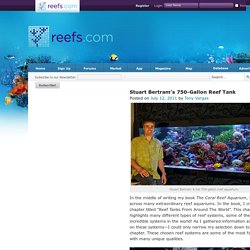 In the middle of writing my book The Coral Reef Aquarium, I came across many extraordinary reef aquariums. In the book, I created a chapter titled “Reef Tanks From Around The World”. This chapter highlights many different types of reef systems, some of the most incredible systems in the world! As I gathered information and photos on these systems—I could only narrow my selection down to 45 for this chapter. These chosen reef systems are some of the most fascinating, with many unique qualities. Left side of 750 Right side of 750 Stuart Bertram’s reef tanks appear twice in my book; once in the chapter mentioned above, and the next time you see one of his tanks is as a finale to the book. Stainless steel cables hold all four panels of glass together. DSPS tank from thailand. 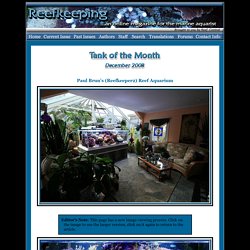 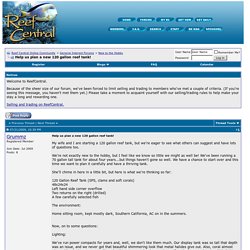 We're not exactly new to the hobby, but I feel like we know so little we might as well be! We've been running a 70 gallon tall tank for about four years...but things haven't gone so well. We have a chance to start over and this time we want to plan it carefully and have a thriving tank. She'll chime in here in a little bit, but here is what we're thinking so far: 120 Gallon Reef Tank (SPS, clams and soft corals) 48x24x24 Left hand side corner overflow Two returns on the right (drilled) A few carefully selected fish The environment: Home sitting room, kept mostly dark, Southern California, AC on in the summers. 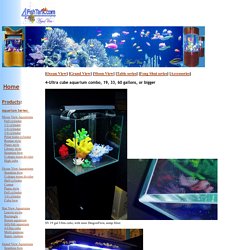 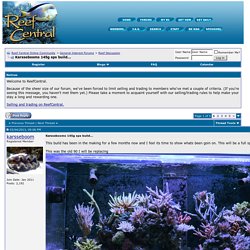 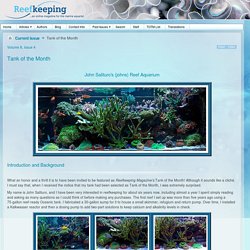 Although it sounds like a cliché, I must say that, when I received the notice that my tank had been selected as Tank of the Month, I was extremely surprised. My name is John Salituro, and I have been very interested in reefkeeping for about six years now, including almost a year I spent simply reading and asking as many questions as I could think of before making any purchases. 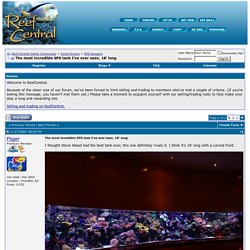 I hate seeing pictures like that because it makes me think that my next house has to have certain features so I can include a 18' tank! So now basically I house shop with the theory, 'how big of a tank will this support, where will the fishroom go, what plumbing/electircal can I tap into'. And it has to be glass, the glass euro-bracing, with that high-iron blue-tint on top gives it away. 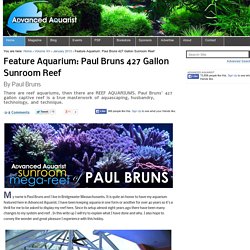 It is quite an honor to have my aquarium featured here in Advanced Aquarist. I have been keeping aquaria in one form or another for over 40 years so it's a thrill for me to be asked to display my reef here. Since its setup almost eight years ago there have been many changes to my system and reef . In this write up I will try to explain what I have done and why. I also hope to convey the wonder and great pleasure I experience with this hobby. Some Background My reefkeeping philosophy can be summed up as having two priorities. MedRed's 60 Gallon Solana XL - Page 30 - Reef Central Online Community. Thank you for your condolences. 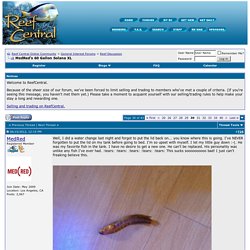 It's definitely been tough dealing with the tank. I didn't realize how attached I was to the BSJ. Quote: Thank you so much! My lid is glass. Don’s High-Tech Reef. Stunning tropical reef aquariums. 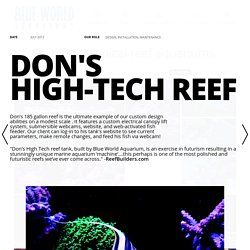 Don's 185 gallon reef is the ultimate example of our custom design abilities on a modest scale . It features a custom electrical canopy lift system, submersible webcams, website, and web-activated fish feeder. Our client can log-in to his tank's website to see current parameters, make remote changes, and feed his fish via webcam! "Don’s High Tech reef tank, built by Blue World Aquarium, is an exercise in futurism resulting in a stunningly unique marine aquarium ‘machine’....this perhaps is one of the most polished and futuristic reefs we’ve ever come across.

" DSPS tank from Thailand V. Tank of the Month - January 2009 - Reefkeeping.com. Editor's Note: This page has a new image-viewing process. Click on the image to see the larger version, click on it again to return to the article. Introduction Wow, first off: what a great honor! Ever since I started this hobby I have hoped to one day achieve "Tank of the Month" (TOTM), but never in my wildest dreams did I think it would actually happen!

The first thing I began doing when I began designing my system was to read all the "Tank Of The Month" articles taking notes, comparing the tanks, and designing my system after them. Tank of the Month - March 2007 - Reefkeeping.com. John Tangeman's (drtango) Reef Aquarium Introduction and Background: Browsing around Reef Central has become one of my favorite pastimes, and I’m thrilled to have my display chosen as a ‘Tank of the Month.” It feels like I just got picked for the Varsity Team. Reef Builder of the Month – Jason Crockett. In 2009 I was formally introduced to Jason Crockett who had just purchased a 90-gallon tank and stand from a good friend, David Noller. After a brief introduction, Jason and I discussed many of the particulars involved with the hobby and I tried to discourage him from taking on the responsibility of a full blown reef aquarium.

Show me your best Aquascape Pictures - Page 4 - Reef Central Online Community Archives. Tips and Tricks on Creating Amazing Aquascapes - Page 35 - Reef Central Online Community. ...sorry, don't know what happened and can no longer edit my post. Here we go again to get better white-balanced (duhhh!) Pictures in place. The "just about finished" scape for my 150gal reef (54"Lx30"Wx24"H). Approx 160lbs of "pre-cooked" and dried Fiji, Tonga Shelf and Complex Branches. Return is on the right end. THANKS to everyone that has contributed to this thread. Front Left Corner (Tank is visible on 2 sides; Return is in the upper area of the doggie-door reflection on the far right end) Robertus Reef- changes over the first year.

4-Ultra. Feature Aquarium: Paul Bruns 427 Gallon Sunroom Reef. My name is Paul Bruns and I live in Bridgewater Massachussetts. Mr. Kang’s Korean reef aquarium is a field of exquisite corals on an elegant aquascape. When we first happen upon a reef aquarium in pictures or real life, one of the first things we look for is the way that the tank is unique, in what it does well. As far as we’re concerned, this Korean reef aquarium set up and maintained by Mr. Kang is one of the most beautiful and progressive reef tanks we’ve seen in a long while.

Beautiful corals with excellent growth and color are draped over a dramatic aquascaping foundation which is both aesthetic and functional. The striking quality of the corals in this Korean reef aquarium are enough to warrant sharing with you, but the aquascape is also something to talk about. Using a lot of large and long pieces of branching live rock, Mr. Like many reefers, we prefer vibrant bold-colored corals over the usually pale, pastel colors that SPS corals usually display in the low nutrient water of ZEOvit aquariums.