Tank Encyclopedia. Changes to personal missions in 9.15. Thanks to Vlad for translating. 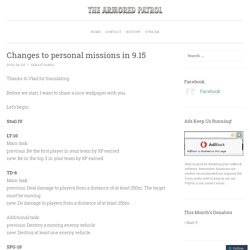 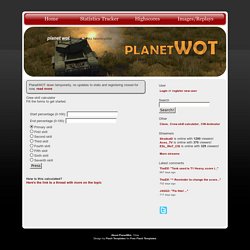 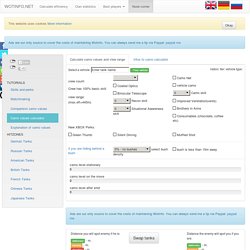 WoTReplays - upload your replays or download others and learn from the best players. Battle Mechanics - Global wiki. Wargaming.net. This page is to provide you with as many details as possible of the core game mechanics, so that you need not search through the forums for this valuable information. 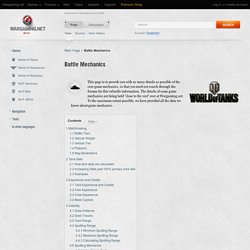 The details of some game mechanics are being held "close to the vest" over at Wargaming.net. To the maximum extent possible, we have provided all the data we know about game mechanics. Matchmaking Team selection for random battles is done according to several parameters. Each battle takes place in a so-called battle tier, and team balancing within this battle tier takes place according to vehicle specific weighting and additional restrictions. Battle Tiers Matchmaking Chart Unique Matchmaking Chart Battles can take place in eleven possible different battle tiers.

The matchmaking chart shows which vehicle belongs to which battle tier. The selection of the battle tier you fight in depends on the amount of players available for each battle tier and is otherwise random. Players often confuse battle tiers and their vehicle's tier. Clan Wars: Tank Roles & Which One is Right for You - World of Tanks Guru. For any World of Tanks player interested in the main end game content in World of Tanks usually referred to as clan wars, you will want to pick the right tanks to be chosen and used on a regular basis. 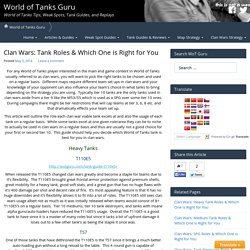 Different maps require different team set ups in clan wars and your knowledge of your opponent can also influence your team’s choice in what tanks to bring depending on the strategy you are using. Typically tier 10 tanks are the only tanks used in clan wars aside from a tier 9 like the M53/55 which is used as a SPG over some tier 10 ones. During campaigns there might be tier restrictions that will cap teams at tier 3, 6, 8 etc. and that dramatically effects your team set up. This article will outline the role each clan war viable tank excels at and also the usage of each tank on a regular basis. While some tanks excel at one given role/area they can be to niche to actually be used in clan wars on a regular basis and thus are usually not a good choice for your first or second tier 10.

Maus. How Armor Works - World of Tanks Guru. Ever wonder why your round bounces off of a lightly armored tank even though it should have went through? 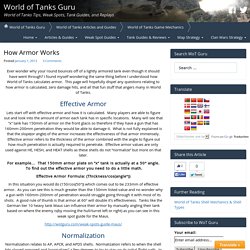 I found myself wondering the same thing before I understood how World of Tanks calculates armor. This page will hopefully dispel any questions relating to how armor is calculated, zero damage hits, and all that fun stuff that angers many in World of Tanks. Lets start off with effective armor and how it is calculated. Many players are able to figure out and look into the amount of armor each tank has in specific locations. Many will see that “x” tank has 150mm of armor on the front glacis so therefore if they have a gun that has 160mm-200mm penetration they would be able to damage it. For example… That 150mm armor plate on “x” tank is actually at a 50° angle.

Effective Armor Formula: (Thickness/cos(angle°)) In this situation you would do (150/cos(50°)) which comes out to be 233mm of effective armor. Normalization relates to AP, APCR, and APDS shells. To recap on the example earlier.. World of Tanks — Free Online Game. 4Ridley's World of Tanks Skinfile database! - Home page. World of Tanks Skins. Wot-news - Efficiency rating calculator. The models from World of Tanks.