Electronic Kits With Online Courses. Do-It-Yourself DNA. Have you ever wondered how scientists get a sample of DNA from a plant, animal, or other organism? 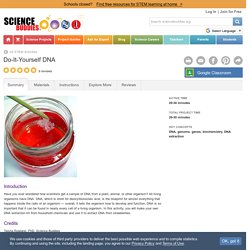 All living organisms have DNA. DNA, which is short for deoxyribonucleic acid, is the blueprint for almost everything that happens inside the cells of an organism — overall, it tells the organism how to develop and function. DNA is so important that it can be found in nearly every cell of a living organism. In this activity, you will make your own DNA extraction kit from household chemicals and use it to extract DNA from strawberries.

This activity is not appropriate for use as a science fair project. What is Evolution? How to Make the Iron Man Missile Launcher. Otto DIY. Algebra 12+ Early Human Evolution: Early Human Culture. Paralleling the biological evolution of early humans was the development of cultural technologies that allowed them to become increasingly successful at acquiring food and surviving predators. 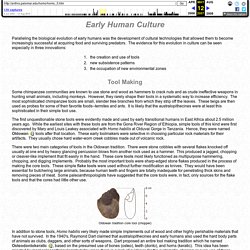 The evidence for this evolution in culture can be seen especially in three innovations: Tool Making Some chimpanzee communities are known to use stone and wood as hammers to crack nuts and as crude ineffective weapons in hunting small animals, including monkeys. However, they rarely shape their tools in a systematic way to increase efficiency. The most sophisticated chimpanzee tools are small, slender tree branches from which they strip off the leaves. These twigs are then used as probes for some of their favorite foods--termites and ants. It is likely that the australopithecines were at least this sophisticated in their simple tool use.

Throughout most of the Homo erectus geographic range, there is clear evidence of progressive improvement in tool making over time. Pigment catalog. Iron(III) oxide - Sciencemadness Wiki. Iron(III) oxide, often referred to as red iron oxide, is the chemical compound with chemical formula Fe2O3. 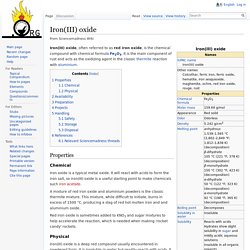 It is the main component of rust and acts as the oxidizing agent in the classic thermite reaction with aluminium. Properties Chemical Iron oxide is a typical metal oxide. It will react with acids to form the iron salt, so iron(III) oxide is a useful starting point to make chemicals such iron acetate. A mixture of red iron oxide and aluminium powders is the classic thermite mixture. Red iron oxide is sometimes added to KNO3 and sugar mixtures to help accelerate the reaction, which is needed when making 'rocket candy' rockets. Physical Availability Sometimes used as a colouring agent for things such as concrete.

Due to the well known thermite reaction, it is commonly available in large amounts online. Preparation Iron can be slowly oxidized by oxygen in the presence of salt water to red iron oxide. Pigment. Synthetic ultramarine pigment is chemically identical to natural ultramarine Pigment Colours - Classification A pigment is a material that changes the color of reflected or transmitted light as the result of wavelength-selective absorption. 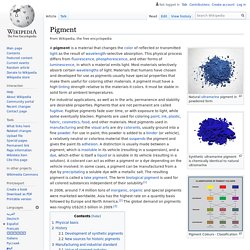 This physical process differs from fluorescence, phosphorescence, and other forms of luminescence, in which a material emits light. Most materials selectively absorb certain wavelengths of light. Preparing a DVD-R to act as a diffraction grating. Main image - A segment of a DVD-R bottom layer with the photo-reactive dye removed See also - Does leaving the dye on a DVD-R grating make any difference? 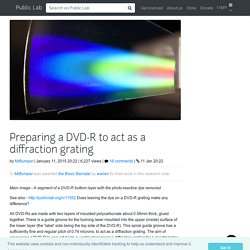 All DVD-Rs are made with two layers of moulded polycarbonate about 0.58mm thick, glued together. There is a guide groove for the burning laser moulded into the upper (inside) surface of the lower layer (the 'label' side being the top side of the DVD-R). This spiral guide groove has a sufficiently fine and regular pitch of 0.74 microns, to act as a diffraction grating. How to measure hydrogen peroxide concentration - Recherche Google. Zinn Education Project. The Armchair Historian. Mystery Science. Smithsonian Learning Lab: Discover, Create, Share. It Must Be Matchic Puzzle. How To Teach a 5 to 10 Year Old To Draw a Person.

The ‘Obvious’ Is Always Overlooked Take a quick look at your student’s or child’s drawing of a person. 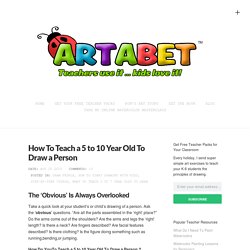 Now Let’s Take a ‘STEP’ I found it! Fun-Schooling with Thinking Tree Books. Understanding Math Rather Than Merely Learning It. Creating an educational RPG adventure for your classroom - Classcraft Blog.