Circumcision and Breast-feeding. 7.full. If You Nurse Your Baby... Chemical contaminants in breast milk... [Environ Health Perspect. 2002. 101 Reasons to Breastfeed Your Child. The American Academy of Pediatrics recommends breastfeeding According to the AAP, "Human milk is species-specific, and all substitute feeding preparations differ markedly from it, making human milk uniquely superior for infant feeding. 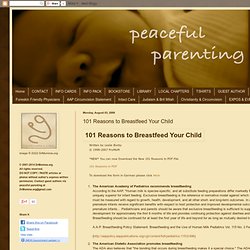 Exclusive breastfeeding is the reference or normative model against which all alternative feeding methods must be measured with regard to growth, health, development, and all other short- and long-term outcomes. In addition, human milk-fed premature infants receive significant benefits with respect to host protection and improved developmental outcomes compared with formula-fed premature infants… Pediatricians and parents should be aware that exclusive breastfeeding is sufficient to support optimal growth and development for approximately the first 6 months of life and provides continuing protection against diarrhea and respiratory tract infection. Watch Your Language. By Diane Wiessinger, M.S., IBCLC Photo © 2009 Danelle Frisbie Article first published in the Journal of Human Lactation, 12:1, 1996. 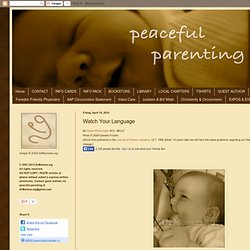 [Note: 14 years later we still face the same problems regarding our literature and our language! 7 Breastfeeding Facts You Should Know. By Danelle Frisbie © 2010 Breastfeeding, while natural and normal to all mammals, can occasionally be a bit of a mystery to those who haven't looked into human lactation and the science behind it, or spend a lifetime growing up among nursing mothers and their babies. 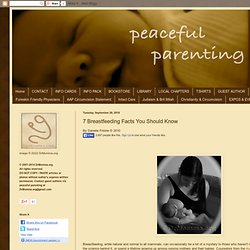 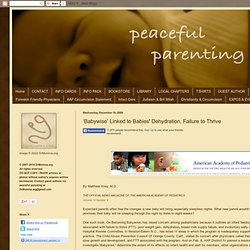 THE OFFICIAL NEWS MAGAZINE OF THE AMERICAN ACADEMY OF PEDIATRICSVolume 14 Number 4 Expectant parents often fear the changes a new baby will bring, especially sleepless nights. Confessions of a Failed Babywiser. By Alexandra Bush This essay is written both as catharsis and restitution. 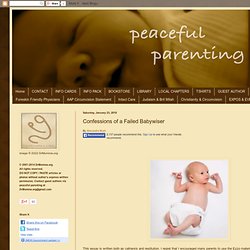 I regret that I encouraged many parents to use the Ezzo materials and feel compelled to warn against it. I also want to share how level-headed parents can be allured by this program. There are many other resources online that outline the medical, Biblical and character problems associated with Gary Ezzo and his parenting programs. With this, I hope to offer a personal view of how these materials can negatively effect a family. Autism made in the U.S.A .mp4. I’m not pumping enough milk. What can I do? By Kelly Bonyata, BS, IBCLC Image credit: Mrs. 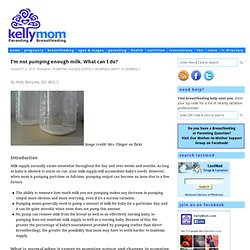 Flinger on flickr Introduction Milk supply normally varies somewhat throughout the day and over weeks and months. How much expressed milk will my baby need? By Kelly Bonyata, BS, IBCLC Image credit: Jerry Bunkers on flickr How much milk do babies need? 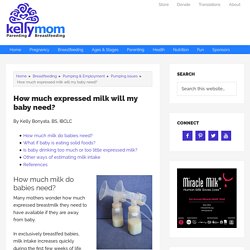 Many mothers wonder how much expressed breastmilk they need to have available if they are away from baby. In exclusively breastfed babies, milk intake increases quickly during the first few weeks of life, then stays about the same between one and six months (though it likely increases short term during growth spurts). Current breastfeeding research does not indicate that breastmilk intake changes with baby’s age or weight between one and six months. The research tells us that exclusively breastfed babies take in an average of 25 oz (750 mL) per day between the ages of 1 month and 6 months. The Case for Cue Feeding. By Lisa Marasco, BA, IBCLC and Jan Barger, MA, RN, IBCLC posted with permission It is now commonly accepted that infants, most especially breastfed infants, thrive best when allowed to feed as they indicate their needs. 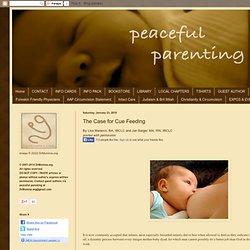 Breastfeeding is, after all, a dynamic process between every unique mother-baby dyad, for which man cannot possibly do a better job than God in designing how infant feeding should work.This has not been the general consensus throughout the twentieth century, however. Even in the late nineteenth century, there were those, mostly male physicians, who began to believe that infant feeding should be regulated by the clock. As artificial baby milk became all the rage in the twentieth century, both formulations of this milk and schedules to feed babies came into popularity. The Surgeon General’s Call to Action to Support Breastfeeding.

Feeding Of Infants - The Mechanics Of Breastfeeding. Increasing Low Milk Supply. Breastfeeding promotes healthy growth. A PhD project from LIFE -- the Faculty of Life Sciences at the University of Copenhagen has shown that breastfed children follow a different growth pattern than non-breastfed children. 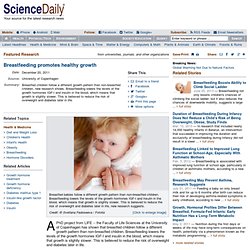 Breastfeeding lowers the levels of the growth hormones IGF-I and insulin in the blood, which means that growth is slightly slower. This is believed to reduce the risk of overweight and diabetes later in life. The PhD project is part of SKOT, a large-scale Danish study of small children, diet and wellbeing, which has followed and examined 330 healthy children at 9, 18 and 36 months. The SKOT project is to increase our knowledge of what Danish children eat in the critical phase when they move from breastmilk or formula to solids.

The transition is critical because the food intake during this period has a significant bearing on the child's growth and risk of developing lifestyle diseases later in life. Lactation Cookies: Increasing Milk Supply. By Danelle Frisbie © 2010 I am frequently asked to pass along lactation cookie recipes. 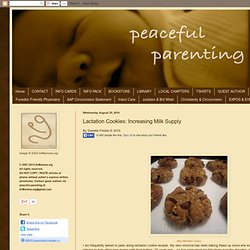 My own momma has been baking these up since she was a nursing mother and RN, striving to help other new moms with their babies, 35 years ago -- so I've consumed my fair share over the decades. While there are many variations out there, they are all essentially the same and boast three main ingredients commonly believed (in North America) to impact milk supply: oatmeal, brewer's yeast, and flax. Some home bakers will throw in fenugreek as well, and because this is known to increase milk supply (in both humans and cows!)

, but hard on the stomach, it isn't a bad idea to add it to foods you'll already be eating (you can open a couple capsules of fenugreek and toss them to the cookie batter). So why are these three ingredients the core foundation in lactation cookies? Oats (or oatmeal) are key in boosting milk supply because of the iron they contain that nursing moms are frequently in need of. Notes: Breastfeeding is Offensive. I'm thankful for not having boobs thrown in my face all the time by offensive and indecent breastfeeding mothers like the ones below. Wait... Well, this is a bad example. Let's try again. Nipplephobia: When Mammals May Not Feed Their Young. Why Not Eat Meat - Vegetarian Mother's Milk Safer.