Doing It Like Lincoln: These Aspiring Lawyers Kick It Old School—By Skipping Law School. ‘Why Didn't You Just Leave?’<br><small>Six Domestic Violence Survivors Explain Why It’s Never That Simple</small> It’s the question every survivor of domestic violence is posed, often incredulously: Why didn’t you just leave? 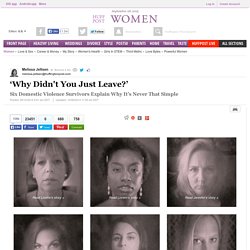 The reality is that leaving an abusive relationship is often a herculean task that endangers the woman and calls for resources that aren’t readily available. In June, after The Huffington Post ran an investigative report on a woman allegedly murdered by her boyfriend, we received an outpouring of responses from domestic violence survivors who wanted to explain why they had stayed with their abusers. We spent the next three months interviewing these women. While they offered hundreds of reasons, ranging from the logistical to the deeply personal, some common themes emerged: Fear.

Lines Out the Door for First Organic Drive-Thru Fast Food Restaurant. Breaking the paradigm of the unhealthy fast-food restaurant, Amy’s Kitchen, known for its organic, non-GMO and vegetarian/vegan frozen food options, has opened a game-changing drive through restaurant in California. 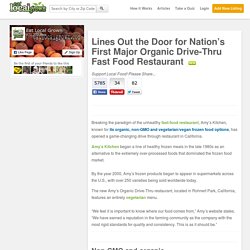 Amy’s Kitchen began a line of healthy frozen meals in the late 1980s as an alternative to the extremely over-processed foods that dominated the frozen food market. By the year 2000, Amy’s frozen products began to appear in supermarkets across the U.S., with over 250 varieties being sold worldwide today. The new Amy’s Organic Drive-Thru restaurant, located in Rohnert Park, California, features an entirely vegetarian menu. Simply Home Community: Tiny Homes Circle Up for Sustainability - Nature and Environment. Over the past few decades, as the economy constricted, college loan debt expanded, and owning a home began to seem increasingly out of reach, some resourceful souls said, “Hey. 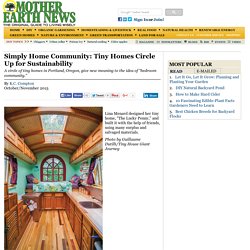 Houses don’t need four-figure square footage for us to call them home — let’s see what we can do with 200 square feet.” Turns out, we can do amazing things, including itty-bitty cabins, nomadic wagons, DIY house trailers, and retrofitted buses and shipping-container homes. Clever solutions to living smaller and better abound, and now the Simply Home Community, a new cohousing village in Portland, Oregon, has joined the mix. This is What Happens When You Decide To Create Your Own Food Security - Grow Food, Not Lawns. If you’re fed up reading labels in the grocery store trying to find some real food that won’t kill you, I feel your pain. 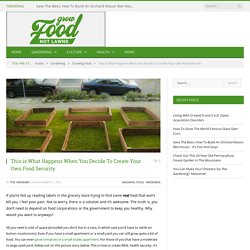 Not to worry, there is a solution and it’s awesome. The truth is, you don’t need to depend on food corporations or the government to keep you healthy. Why would you want to anyways? All you need is a bit of space (provided you don’t live in a cave, in which case you’d have to settle on button mushrooms). Living without money: what I learned. With little idea of what I was to expect, or how I was to go about it, seven years ago I began living without money. 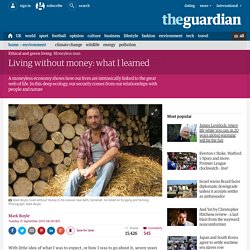 Originally intended as a one-year experiment in ecological living, I wanted to explore how it felt as a human being to live without the trappings and security that money had long-since afforded me. While terrifying and tough to begin with, by the end of the first year I somehow found myself more content, healthier and at peace than I had ever been. And although three years later I made a difficult decision to re-enter the monetary world – to establish projects that would enable others to loosen the grip that money has on their lives – I took from it many lessons that have changed my life forever. 21 Technologies That Are Decentralizing The Economy And Bringing Real Power Back To The People. The world is becoming more centralized, increasingly focused on economies of scale and transferring wealth to a tiny elite at the top of the financial system. 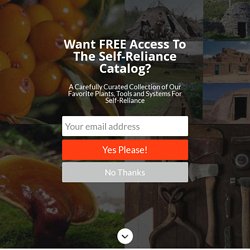 Yet, at the same time there is another movement that is actively working to decentralize the world. The 21 decentralizing technologies and innovations in this list are all related to food, energy, water, shelter and waste and they are not designed to disconnect you from mankind, but rather, they integrate deeply with families, communities, societies, and all humans; in a bottom-up process rather than a centralized top-down structure. Many of these technologies are open-source, some are high-tech and others are low-tech and low-cost solutions. This list is far from exhaustive, in fact, the reader will discover that each of the technologies on this list is just the tip of a larger network of innovations.

Saturday Morning, 9:42 am on 5 September 2015. Joining Forces for More Sustainable Communities - Nature and Environment. The alienation and affluenza so prevalent in our society can sometimes seem overwhelming. 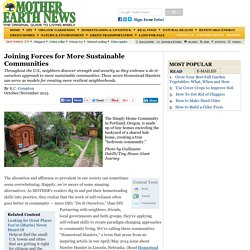 Happily, we’re aware of some amazing alternatives. As MOTHER’s readers dig in and put their homesteading skills into practice, they realize that the work of self-reliance often goes better in community — more DIO, “Do It Ourselves,” than DIY. Troy Gardens Case Study. A key element of the Troy Gardens Case study is the development of a companion Distance Learning Course. 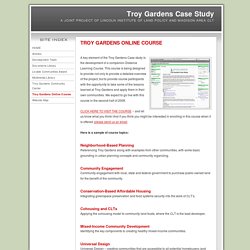 This course is being designed to provide not only to provide a detailed overview of the project, but to provide course participants with the opportunity to take some of the lessons learned at Troy Gardens and apply them in their own communities. We expect to go live with this course in the second half of 2008. CLICK HERE TO VISIT THE COURSE -- and let us know what you think! And if you think you might be interested in enrolling in this course when it is offered, please send us an email. The City Forest - P.A.Yeomans. P.A.Yeomans The City Forest Keyline Sydney First published 1971 by Keyline Publishing Pty. 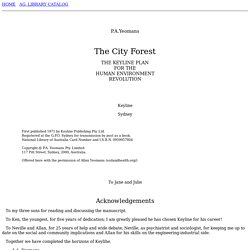 Ltd. Copyright.@ P.A. 10 Things You Need To Know When Being Questioned By the Police. Videos circulating the Internet show regular, unthreatening people of color calmly asking why a police officer is arresting them. 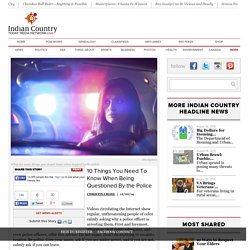 First and foremost, attorneys, civil rights advocates, and even police officers, offer this advice: Do not argue. Don’t do anything to escalate tension. Be polite. Harvard student startup lets you test-drive tiny house living for just $99 a night. Moving into a tiny house is a big commitment. Fortunately for prospective micro-home owners, the Harvard University-based startup Getaway will make the decision-making process easier by providing the opportunity to affordably test-drive tiny house living with their student-designed cabins.

Stationed in rural New Hampshire, the 160-square-foot mobile house can be rented for as little as $99 a night and is equipped with a composting toilet, solar electricity, and propane heat. Created to help grow the Tiny House movement, Getaway is the first project launched by the Millennial Housing Lab, a Harvard Innovation Lab project founded by Harvard MBA student Jon Staff and Harvard Law student Peter Davis. Kenyan Student Converts School's Waste (Yes, Poo) into Safe, Clean Fuel. In early January 2013, Kenya’s oldest English-language school, the Maseno School, opened new dormitories for 720 students, and it had a couple of problems. Pit latrines and a faulty sewage system inevitably left foul odors and polluted local freshwater sources, while the kitchen used firewood for cooking fuel—unhealthy for cooks and the environment alike. High school senior, Leroy Mwasaru, now 17, and four of his friends had an idea: to harvest poop and other waste and turn it into a safe, clean and eco-friendly source of cooking fuel.

Check out this video courtesy of Makeshift, and read on past the jump to learn more about the project! What Mwasaru and his friends proposed was to build a Human Waste Bioreactor (HWB) that would harvest not only the waste from all the students in the dorm, but also organic waste from the kitchen, cow dung and slashing grass to create biogas for cooking fuel. A New Leaf: Pennsylvania Program Teaches Rural Teens to Farm. On a hazy, humid July morning, 17-year-old Celeste McMullan crouches in a bed of Romano bean plants.

It’s her first time picking beans, but she already seems to have mastered proper picking technique, carefully moving her fingers from the roots upward, removing only the greenbeans that are fully grown. Before this summer, McMullan had never thought much about greenbeans—or food, in general. Now, she says, “I’m learning what real food is.” At her part-time job at a fast-food chain and at home she’s noticed that a lot of people choose food purely out of ease and convenience. Beverly Grant brings farmers markets to Denver food deserts. Beverly Grant knows everyone is really busy, so she's all about fast food. "I can show people how, in 30 seconds, they make a smoothie or a quick saute or a detox salad," she said.

"I just show them that fast food isn't what you think — it can be fresh fruit. " An evangelist for healthy eating and a mom with three children ages 15 to 26, Grant started the first farmers market in the historic Five Points neighborhood, called the Mo' Betta Green MarketPlace. Her mission is built into the name itself. "The slang part, mo' betta, is about self- improvement, something that's easy and that you can do one step, one bite at a time," she said. Since then, she's been asked to bring her farmers market into three other neighborhoods — Park Hill, Highland, and now Stapleton, where Mo' Betta Green MarketPlace started this week. She partners only with people who share her goals: food literacy, environmental stewardship and social responsibility. Healthy roots. Meet the New American Dream 2015 Neighborhood Challenge Winners. The Permaculture Student. Reflections on Damanhur (Part 1) - The New and Ancient Story. Sharing is Not Just For the Young.

Anti-Oppression Resources. 10 Steps to Starting a Community Garden. In Vancouver, developers discovered that turning their vacant lots into community gardens while they waited for their next project to be ready could save them hundreds of thousands of dollars in city taxes. 'The Dream of Internet Freedom is Dying,' Warns Top Civil Liberties Attorney. Jennifer Granick, addressing security professionals at the annual Black Hat conference in Las Vegas on August 5, said "the Four Horsemen of the Infocalypse: terrorists, pedophiles, drug dealers, and money launderers" are allowing the government to push for even more regulation and control of the Internet.

Jackson Katz: Violence against women—it's a men's issue. Welcome To Urban Farming! Land Banks and Land Banking: 2nd Edition. This Sliding Scale Café Takes Food Access to the Next Level. In The Netherlands Sex Education Starts In Kindergarten: Here’s What They Tell Them & Why. Locking in the Promise to Buy Local. How to Start a Tool Library. Liberty Prairie Foundation. Using TimeBanking to provide respite for caregivers. Welcome to the Kerr Center for Sustainable Agriculture - Kerr Center. Institute of Urban Homesteading. Security for Girls Through Land Project (Girls Project) Remineralize the EarthRemineralize the Earth.

The Community-Scale Permaculture Farm. How a Modern Root Cellar Could Help Small Farms Sell Food Year-Round. These Neighbors Got Together to Buy Vacant Buildings. Now They’re Renting to Bakers and Brewers by Olivia LaVecchia. A Deeper Democracy.

Time Dollars: The New Currency That Enables Americans to Turn Their Hidden Resource - Time - Into Personal Security and Community Renewal by Jonathan Rowe. Our Common Wealth: The Hidden Economy That Makes Everything Else Work by Jonathan Rowe. Share International on the Reappearance of Maitreya the World Teacher. Ready Community: Vulnerability and Resilience - Jun 26, 2015. Learn How This Family Grows 6,000 Lbs Of Food on Just 1/10th Acre. Transition US. This is What Happens When You Decide To Create Your Own Food Security - Grow Food, Not Lawns.

Tuesday TeleSeminar: Practices for Self-Leadership  Beyond the CSA: Four Ways Communities Support Everything From Books to Beer by Dana Drugmand. The Control of Seed and Seed Sovereignty. What If There Was a Middle Option Between Renting and Owning? Stand up for peace, not war, with Iran! Weaving the Community Resilience and New Economy Movements in the US.