Duckweed as a Primary Feedstock for Aquaculture. Summary: The technical literature shows that duckweeds (Lemnaceae) have a strong potential as primary feedstocks for production of livestock and fish. 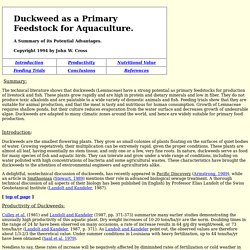 These plants grow rapidly and are high in protein and dietary minerals and low in fiber. They do not produce toxic alkaloids and are palatable to a wide variety of domestic animals and fish. Feeding trials show that they are suitable for animal production, and that the meat is tasty and nutritious for human consumption. Growth of Lemnaceae requires shallow ponds, but their culture reduces evaporation from the water surface and decreases growth of undesirable algae.

Introduction: Duckweeds are the smallest flowering plants. A delightful, nontechnical discussion of duckweeds, has recently appeared in Pacific Discovery (Armstrong, 1989), while an article in Smithsonian (Stewart, 1989) mentions their role in advanced biological sewage treatment. Biology of the Northern Crayfish (Orconectes virilis) Description Crayfish, of which our own Northern Crayfish (Orconectes virilis) is one of about 500 species worldwide, are crustaceans related to copepods, barnacles, crabs, shrimps, lobsters, etc. 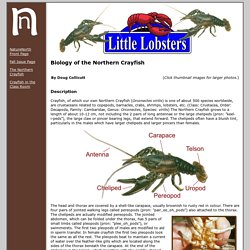 (Class: Crustacea, Order: Decapoda, Family: Cambaridae, Genus: Orconectes, Species: virilis) The Northern Crayfish grows to a length of about 10-12 cm, not including the 2 pairs of long antennae or the large chelipeds (pron: "keel-i-peds"), the large claw or pincer bearing legs, that extend forward. The chelipeds often have a bluish tint, particularly in the males which have larger chelipeds and larger pincers than females. The head and thorax are covered by a shell-like carapace, usually brownish to rusty red in colour. There are four pairs of jointed walking legs called pereopods (pron: "pair_ee_oh_pods") also attached to the thorax. Pereopods. Raising crayfish in the north? - Homesteading Today. THE SECOND AGRICULTURAL REVOLUTION: Reclaiming the future of our food with aquaponics gardening by Ako Kitissou. Geodesic Dome Greenhouse. Greenhouse Aquaponics: DIY system to farm fish with vegetables.

In this video, Rob Torcellini shows us the aquaponics greenhouse in his Connecticut backyard. 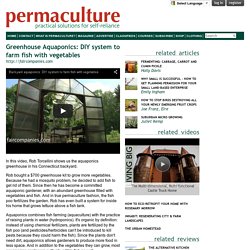 Rob bought a $700 greenhouse kit to grow more vegetables. Because he had a mosquito problem, he decided to add fish to get rid of them. Since then he has become a committed aquaponic gardener, with an abundant greenhouse filled with vegetables and fish. And in true permaculture fashion, the fish poo fertilizes the garden. Growing fodder for the homestead. Feed cost is the biggest ongoing expense for a farmer. 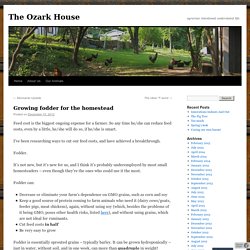 So any time he/she can reduce feed costs, even by a little, he/she will do so, if he/she is smart. I’ve been researching ways to cut our feed costs, and have achieved a breakthrough. Fodder. It’s not new, but it’s new for us, and I think it’s probably underemployed by most small homesteaders – even though they’re the ones who could use it the most. Fodder can: Aquaponics in a Bathtub. Think making your own aquaponics setup would be too hard and costly? 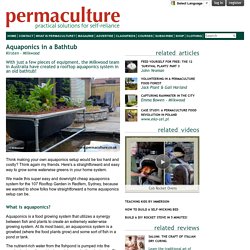 Think again my friends. Here's a straightforward and easy way to grow some waterwise greens in your home system. How to Buy, Site and Erect a Polytunnel. The polytunnel has almost become a badge of honour for the permaculturist, no self-respecting PC-person would be seen without one. 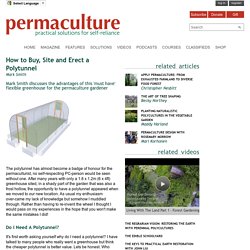 After many years with only a 1.8 x 1.2m (6 x 4ft) greenhouse sited, in a shady part of the garden that was also a frost hollow, the opportunity to have a polytunnel appeared when we moved to our new location. As usual my enthusiasm over-came my lack of knowledge but somehow I muddled through. Rather than having to re-invent the wheel I thought I would pass on my experiences in the hope that you won't make the same mistakes I did! 6 Unique Features of Permaculture Greenhouses.

Year-round growing is a hot topic these days. 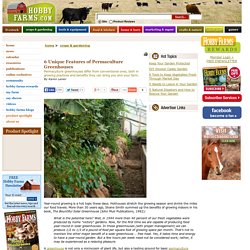 Hothouses stretch the growing season and shrink the miles our food travels. More than 30 years ago, Shane Smith summed up the benefits of growing indoors in his book, The Bountiful Solar Greenhouse (John Muir Publications, 1982): What is the potential here? Well, in 1944 more than 40 percent of our fresh vegetables were produced by home "victory" gardens.

Now, for the first time we are capable of producing food year-round in solar greenhouses. Grow Food Year Round With Radically Sustainable Passive Solar Greenhouse. Interested in building your own greenhouse, but don’t know where to begin? 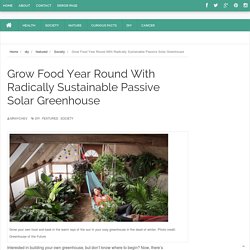 Now, there’s theGreenhouse of the Future. Building a Pit Garden Start to Finish - PitGarden.ComPitGarden.Com. It was roughly 9 months ago that the Walipini concept was thrust into my consciousness. 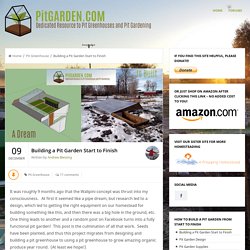 At first it seemed like a pipe dream, but research led to a design, which led to getting the right equipment on our homestead for building something like this, and then there was a big hole in the ground, etc. One thing leads to another and a random post on Facebook turns into a fully functional pit garden! This post is the culmination of all that work. Seeds have been planted, and thus this project migrates from designing and building a pit greenhouse to using a pit greenhouse to grow amazing organic produce year round. (At least we hope!) All of these posts originally appeared at A Prepping Homestead, where you can follow our adventures in all things homesteading, but for pit gardening in pit greenhouses this is the site you want.

Making a Hotbed in your Polytunnel. I have been intrigued by the idea of a hotbed for years, but the trigger for this project was reading Hot Beds by Jack First. 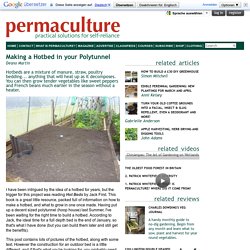 This book is a great little resource, packed full of information on how to make a hotbed, and what to grow in one once made. Having put up a decent sized polytunnel (hoop house) last Summer, I've been waiting for the right time to build a hotbed. According to Jack, the ideal time for a full depth bed is the end of January, so that's what I have done (but you can build them later and still get the benefits). This post contains lots of pictures of the hotbed, along with some text. However the construction for an outdoor bed is a little different, and if that's what you're looking for, you probably need the book. 5 Walipini/Underground Greenhouse Facts. The walipini, or underground greenhouse as it is often known, can be easy to build and extends the food growing season. By using solar heat, windows facing the sun, and thick walls, growers in temperate and cool climates can grow into winter.

A great solution for our ever changing climate and for those making a living from growing vegetables. Below is Shaun's own walipini. For more from Shaun visit www.redshed.co.uk/blog Further resources. 5 Tips to Keep Your Greenhouse Thriving. Hello everyone, Over the years of running our passive solar greenhouse, we’ve learned a few things about managing one. Here are our 5 top tips for ensuring that our passive solar greenhouse is thriving and productive.

And the best part? They apply to any type of greenhouse! : Getting the Watering Down to a Science Mulch, Mulch, and More Mulch Planting Plants to Attract Beneficial Bugs Staying on Top of Diseases Re-mineralizing the Soil Want to know how we do it? Looking forward to your thoughts, Rob and Michelle. Design Your Own Passive Solar Greenhouse (Online) Learn the secrets of the four seasons garden – and take your first step toward harvesting fresh produce year-round! Fresh produce, year-round? No, we haven’t moved Down Under, or lost touch with the Calgary growing season. How to make a bamboo polytunnel. We used a local renewable material, caña (like bamboo). You could use anything long and bendy – we would like to try it with hazel next time we are further north. The only items we paid for are the plastic and string (pita string made from fibres of the giant succulent Agave plant).

It took six days with four people working. It's a lovely material to work with, flexible, strong and graceful. The challenge throughout is to balance and work with the natural forces of the material. Step 1. The Greenhouse Gardener's Manual by Roger Marshall. The Compost-Powered Water Heater: How to Heat Your Water, Greenhouse, or Building with Only Compost by Gaelan Brown. Infographic: Aquaculture Pond Construction. The Fish Ponds of Molokai. Trailer only – watch full video here! Geoff Lawton visits the Hawaiian Island of Molokai where an 800 year old traditional fish farming system is being restored.

Fish farming has been practiced for centuries in many cultures. The Hawaiians built a sustainable system that worked from the top of the mountain range and ran right down to the base and out to sea. The Hawaiians built a network of terraced gardens – small spring systems in the upper slope of the island to grow their starch crops of taro. Excess water ran from terrace to terrace, over the most distance to build an abundant food harvesting system. Modern Rustic: Greenhouses and Gardening: A homesteading guidebook for subsistence gardening, heirloom vegetables and greenhouse ideas by Eric Beuning. If You Love Vanilla, You Have Orchids To Thank. While sometimes used as a synonym for bland, vanilla is anything but when it is pure extract.

A Canadian Rocket Stove Powered Greenhouse. How to Raise Oysters in an Aquarium for Pearls. How to Grow Seaweed at Home. Seaweed is Common Denominator. Freshwater Mussel– Velesunio ambiguous. By Rob McCormack The Freshwater Mussel– Velesunio ambiguous is a native of the Murray Darling System. There are 2 different types of mussels in NSW. River Mussels require flowing water to live and breed.

Greenhouses are wonderful places, especially in the spring when benches are filled with brilliant green starts, and in the summer, its doors and roof vents propped open, with cucumbers trailing from the ceiling and tomatoes ready for picking. Winter Growing Varieties & Supplies. The Greenhouse Expert: The world's best-selling book on greenhouses by D.G. Hessayon. The Greenhouse Manual for Gardeners by Roger Marshall. Shellac: It’s a bug AND a feature! How to Raise Aquaponic Shrimp and Crayfish. AQUAPONICS TILAPIA/SHELL FISH WARM FRESH WATER - Jeff's Geo Metro. _Have question ask me please, I'm still building this page and know there is much more to put on it. The Complete Greenhouse Book: Building And Using Greenhouses From Coldframes To Solar Structures by Peter Clegg. Solviva: How to Grow $500,000 on One Acre and Peace on Earth: Learning the Art of Living with Solar-Dynamic, Bio-Benign Design by Anna Edey.