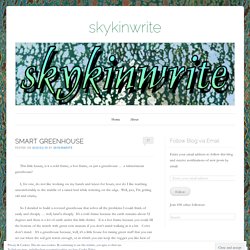 I, for one, do not like working on my hands and knees for hours, nor do I like reaching uncomfortably to the middle of a raised bed while tottering on the edge. Well, jeez, I’m getting old and cranky. So I decided to build a covered greenhouse that solves all the problems I could think of easily and cheaply … well, kind’a cheaply. It’s a cold frame because the earth remains about 52 degrees and there is a lot of earth under this little shelter. It is a hot frame because you could fill the bottom of the trench with green cow manure if you don’t mind walking in it a bit. It’s subterranean — largely. Aquapini and Walipini Open Source Hub. As part of One Community’s four-phase strategy and global change methodology, our Phase II food infrastructure is an open source project-launch blueprinting of 6 structures that will represent 3 different aquapini and walipini designs. 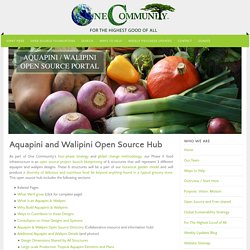 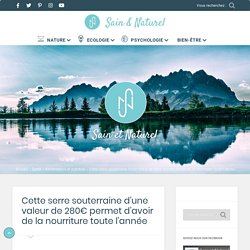 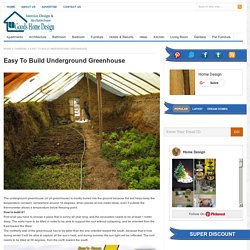 How to build it? First of all you have to choose a place that is sunny all year long, and the excavation needs to be at least 1 meter deep. The walls have to be tilted in order to be able to support the roof without collapsing, and be oriented from the East toward the West. I-uv. Managing the Hoophouse for Year Round Production. Please read and agree to the following terms. 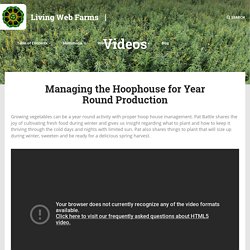 If you disagree, you will be re-directed to the home page, and will not be able to attend on-farm events. For the opportunity to participate in this workshop, conducted through Living Web Farms (“LWF”), I hereby grant to LWF and its successors, licensees, assigns, employees and/or agents (a) the right to photograph, record, tape, film and otherwise reproduce my likeness, voice, mannerisms, image, appearance and performance during my participation in the Workshop, and (b) the right to use my name, likeness, portrait or pictures, voice and biographical material about me. Aquapini and Walipini Planting and Harvesting: Diversity.

This page is the open source project-launch blueprinting page specific to the free-sharing and global collaboration regarding the One Community Walipini, Aquapini, and Zen Aquapini planting and harvesting details. 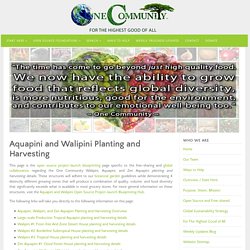 These structures will adhere to our botanical garden guidelines while demonstrating 4 distinctly different growing zones that will produce a combination of quality, volume, and food diversity that significantly exceeds what is available in most grocery stores. For more general information on these structures, visit the Aquapini and Walipini Open Source Project-launch Blueprinting Hub. The following links will take you directly to the following information on this page: RELATED PAGES (Click icons for complete pages) The six initial food production structures of One Community are designed to be duplicated as standalone structures or as a complete village food infrastructure set. 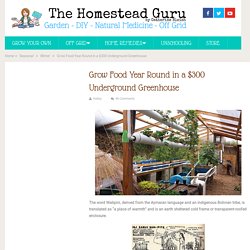 This underground greenhouse was created for the cold regions of South America to maintain food production year round, but is now being adopted by gardeners of all skill levels across the world. Most say that Walipinis should be at least 8’ by 12’ in size, but many people build even larger. Searching online you can find all types of plans and blueprints on how to design your underground greenhouse.

The temperature six to eight feet below the surface fluctuates from 50 up to 70 degrees Fahrenheit! If you are in an especially cold climate you would want to lay the inside of your walipini with stone, earth bags of lava rocks, or any dense material able to store heat. Build An Underground Year Round Greenhouse For Less Than $300! Thehomestead. The word Walipini, derived from the Aymaran language and an indigenous Bolivian tribe, is translated as “a place of warmth” and is an earth sheltered cold frame or transparent-roofed enclosure. 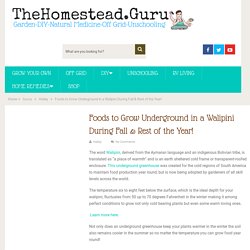 This underground greenhouse was created for the cold regions of South America to maintain food production year round, but is now being adopted by gardeners of all skill levels across the world. The temperature six to eight feet below the surface, which is the ideal depth for your walipini, fluctuates from 50 up to 70 degrees Fahrenheit in the winter making it among perfect conditions to grow not only cold bearing plants but even some warm loving ones. Grow Food Year Round in a $300 Underground Greenhouse. Citrus In The Snow: Geothermal Greenhouses Grow Local Produce In Winter. Russ Finch holds up half of a Cara Cara orange grown in his geothermal greenhouse in Alliance, Neb. 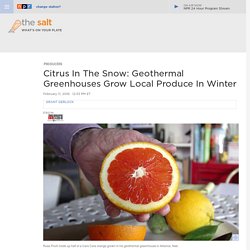 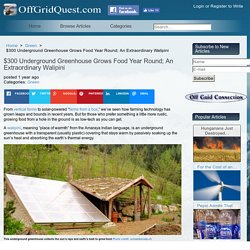 Growing Citrus In The Snow! How Does He Do It? Gear Up For Winter Now! Posted Categories: Green, Sustainability, Survival, Inspiration “We can grow the best citrus in the world, right here on the high plains,” says Russ Finch, the former mailman (pictured above) who is the creative superstar genius responsible for building the Greenhouse in the Snow. And he can do it spending only $1 a day in energy costs. For Midwesterners (and many of the rest of us) produce in the winter means things imported form warmer climes or grown in greenhouses, which typically have a prodigious hunger for energy and are fed by burning fossil fuels.

Midwestern geothermal greenhouse provides local citrus year round for $1 a day. Greenhouse in the Snow, built by a former mailman, grows an abundance of local produce high on the Nebraska plains. "We can grow the best citrus in the world, right here on the high plains,” says Russ Finch, the former mailman (pictured above) who is the creative superstar genius responsible for building the Greenhouse in the Snow. And he can do it spending only $1 a day in energy costs. For Midwesterners (and many of the rest of us) produce in the winter means things imported form warmer climes or grown in greenhouses, which typically have a prodigious hunger for energy and are fed by burning fossil fuels. But by harnessing the Earth's natural internal heat to warm a greenhouse, oranges and other tropical treats thrive without the waste and pollution typically found in so much agriculture.

As Grant Gerlock writes at NPR, the floor is dug 4 feet below the surface, the roof is slanted toward the south to harness as much sun as it can. Watch the charming Mr. Underground Greenhouse Construction Manual. $300 Underground Greenhouse Grows Produce Year-Round, Even in Severe Climates. By Carolanne Wright Contributing Writer for Wake Up World With staggering food prices and shortages looming, there’s no better time to grow your own produce. Sadly, most greenhouses are expensive to build and impractical to heat during cold, wintery conditions. Thankfully, a solution is found with the Walipini. Developed for South American mountainous regions over twenty years ago, it allows edibles to be grown year-round – even in the most inhospitable weather. Unlimited growing season. Build a $300 underground greenhouse for year-round gardening (Video)

Growers in colder climates often utilize various approaches to extend the growing season or to give their crops a boost, whether it's coldframes, hoop houses or greenhouses. Greenhouses are usually glazed structures, but are typically expensive to construct and heat throughout the winter. A much more affordable and effective alternative to glass greenhouses is the walipini (an Aymara Indian word for a "place of warmth"), also known as an underground or pit greenhouse. First developed over 20 years ago for the cold mountainous regions of South America, this method allows growers to maintain a productive garden year-round, even in the coldest of climates. Amazon. $300 Underground Greenhouse Grows Food Year Round; An Extraordinary Walipini. From vertical farms to solar-powered “farms from a box,” we’ve seen how farming technology has grown leaps and bounds in recent years.

But for those who prefer something a little more rustic, growing food from a hole in the ground is as low-tech as you can get. A walipini, meaning “place of warmth” from the Amaraya Indian language, is an underground greenhouse with a transparent (usually plastic) covering that stays warm by passively soaking up the sun’s heat and absorbing the earth’s thermal energy. Fruits and vegetables can be grown year-round, making it ideal for communities in colder locations that can’t usually grow their own fresh and local produce during certain parts of the year. The farming method isn’t exactly new.