Familiarising the Colony: Distance and Proximity in Dutch and German Colonial Photography and Visual Culture. Organised as a Dutch-German collaboration between Leiden University and the University of Cologne, this workshop on colonial photography and visual culture took place in early July 2021. 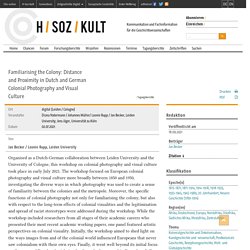 The workshop focused on European colonial photography and visual culture more broadly between 1850 and 1950, investigating the diverse ways in which photography was used to create a sense of familiarity between the colonies and the metropole. Moreover, the specific functions of colonial photography not only for familiarising the colony, but also with respect to the long-term effects of colonial visualities and the legitimisation and spread of racist stereotypes were addressed during the workshop. While the workshop included researchers from all stages of their academic careers who presented their most recent academic working papers, one panel featured artistic perspectives on colonial visuality. Port Royale 4 - Release Trailer (US) Slavernij. Rijksmuseum slavery exhibition confronts cruelty of Dutch trade.

The aim of a first exhibition on the Dutch slave trade to be shown at the Rijksmuseum, launched on Tuesday by King Willem-Alexander, is not to be “woke” but to be a “blockbuster” telling a truer story of the Golden Age, the director general of the national institution has said. 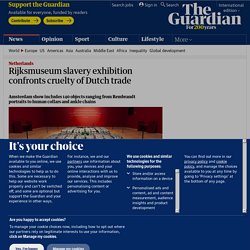 Taco Dibbits said his museum had no intention of taking sides in a political and cultural debate but that the royal visit, broadcast live on national television, highlighted that the wealth bestowed and cruelty endured is not just relevant to the descendants of those enslaved. “I think, I mean obviously you would have to ask [Willem-Alexander] yourself, but I think with that he emphasises that this is part of our history that concerns all people in the Netherlands and not only the descendant of a slave”, said Dibbits. Fachinformationsdienst Benelux / Low Countries Studies. 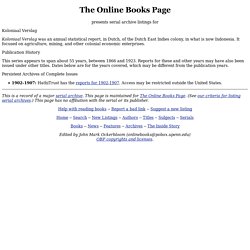 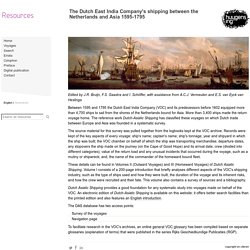 Bruijn, F.S. Gaastra and I. Schöffer, with assistance from A.C.J. Vermeulen and E.S. van Eyck van Heslinga Between 1595 and 1795 the Dutch East India Company (VOC) and its predecessors before 1602 equipped more than 4,700 ships to sail from the shores of the Netherlands bound for Asia. New York State Archives. The New York State Archives holds the surviving records of the Dutch colony of New Netherland, which encompassed the earliest European settlements that became the states of New York, New Jersey, Pennsylvania, and Delaware. 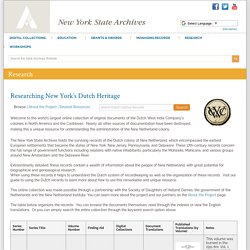 These 17th-century records concern the full range of government functions including relations with native inhabitants, particularly the Mohawks, Mahicans, and various groups around New Amsterdam and the Delaware River. Extraordinarily detailed, these records contain a wealth of information about the people of New Netherland, with great potential for biographical and genealogical research. When using these records it helps to understand the Dutch system of recordkeeping as well as the organization of these records. 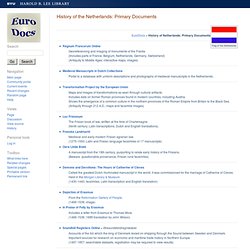 The History of the Dutch Slave Trade 1600- 1863. Maps (KITLV) (under construction) An estimated 80% of this collection relates to Indonesia, with maps from the colonial period as well as the modern maps thereafter. 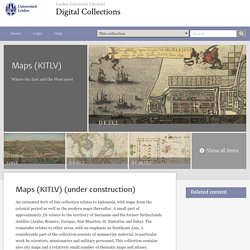 A small part of approximately 5% relates to the territory of Suriname and the former Netherlands Antilles (Aruba, Bonaire, Curaçao, Sint Maarten, St. Eustatius and Saba). The remainder relates to other areas, with an emphasis on Southeast Asia. A considerable part of the collection consists of manuscript material, in particular work by scientists, missionaries and military personnel. Southeast Asian & Caribbean Images (KITLV) The KITLV image collection holds photographs, prints and drawings that were acquired by The Royal Netherlands Institute of Southeast Asian and Caribbean Studies (KITLV). 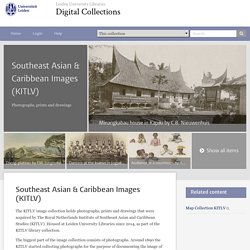 Housed at Leiden University Libraries since 2014, as part of the KITLV library collection. The biggest part of the image collection consists of photographs. Around 1890 the KITLV started collecting photographs for the purpose of documenting the image of the Dutch East and West Indies in all their facets, such as landscapes, town views, architecture, and life under indigenous and Dutch rule and so forth. The number of images described is constantly increasing as previously undocumented image material is added to the database. Please be aware that the collection is still under construction. Homepage - KIT Royal Tropical Institute. Kwame Nimako - The Dutch Atlantic: Slavery, Abolition and Emancipation. "A Color line through Dutch History" - August 2019 Groningen. Nederland en slavenhandel: een ontnuchterende analyse in een verhit debat. In gesprek met Piet Emmer. Transfer of sovereignty over Indonesia 1949.

The Rise and Fall of the Dutch Colonial Empire. The People of Dutch East Indies (1940) Slave narratives from Dutch colonisation in Indonesia. By Karen Williams In 1657, five years after the start of Dutch colonialism in South Africa, an indigenous man, Doman, was sent to the Dutch “prize colony” of Batavia, present-day Jakarta. 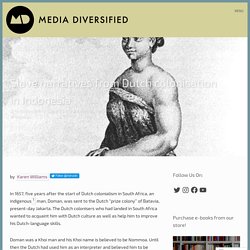 The Dutch colonisers who had landed in South Africa wanted to acquaint him with Dutch culture as well as help him to improve his Dutch-language skills. Doman was a Khoi man and his Khoi name is believed to be Nommoa. Until then the Dutch had used him as an interpreter and believed him to be completely friendly with the Dutch and supportive of their colonialist aims. "The World's Oldest Trade": Dutch Slavery and Slave Trade in the Indian Ocean in the Seventeenth Century. “Compared with the Atlantic trade, none of this Indian Ocean flow of captive labor, legal or illegal, has been well researched, and there are no conclusive quantitative studies of its volume …”P. 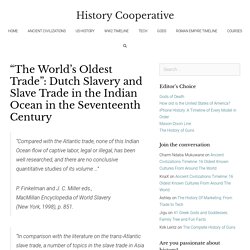 Finkelman and J. C. Het verhaal van de anderen. Boten- en passagiers-lijsten Nederlands-Indië. Dutch museums vow to return art looted by colonialists. Thousands of pieces of art deemed looted by Dutch colonialists could be returned to their country of origin after the Netherlands’ most famous museums backed a report proposing a wholesale “recognition and rectification of these injustices”. The directors of the Rijksmuseum and Tropenmuseum in Amsterdam said they would support the proposal made on Tuesday for a legal structure for the return of an estimated 100,000 pieces where a claim for restitution could be made, with the emphasis on return where “involuntary loss” is identified. Among the exhibits cited by the report from the Dutch Council of Culture as needing examination is a 70-carat diamond that belonged to the Sultan of Banjarmasin and was sent to the Netherlands after his land, now part of Indonesia, came under Dutch control at the end of the 19th century. The diamond is on display in the Rijksmuseum.