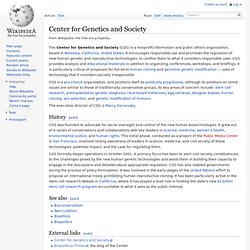 It encourages responsible use and promotes the regulation of new human genetic and reproductive technologies, to confine them to what it considers responsible uses. CGS provides analysis and educational materials in addition to organizing conferences, workshops, and briefings. It is particularly critical of proposals for full-term human cloning and germline genetic modification — uses of technology that it considers socially irresponsible. CGS is a pro-choice organization, and positions itself as politically progressive, although its positions on some issues are similar to those of traditionally conservative groups. Its key areas of concern include: stem cell research, preimplantation genetic diagnosis, race-based medicines, egg retrieval, designer babies, human cloning, sex selection, and genetic modification of humans. History[edit]  Hybrids & Chimeras. Hybrid animals are created when gametes (reproductive cells) from different species join to form a single embryo. 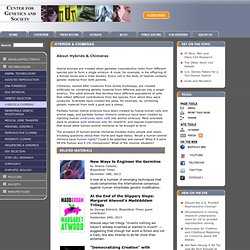 A mule, for example, is the offspring of a female horse and a male donkey. Every cell in the body of hybrids contains genetic material from both parents. Chimeras, named after creatures from Greek mythology, are created artificially by combining genetic material from different species into a single embryo. The adult animals that develop have different populations of cells that reflect different contributions from the species from which they were produced. Scientists have created the geep, for example, by combining genetic material from both a goat and a sheep. Black-Eyed People in Texas, Nebraska. The early July sun beat on 19-year-old Dallas Adams as he pumped gas into his car at a convenience store in Lucas, Texas. 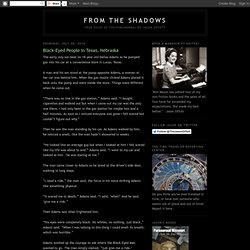 A man and his son stood at the pump opposite Adams, a woman at her car was behind him. When the gas nozzle clicked Adams placed it back onto the pump and went inside the store. Creepy Cleveland: Black Eyed Beings. Ok. 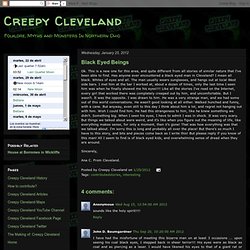 This is a new one for this area, and quite different from all stories of similar nature that I've been able to find. Has anyone ever encountered a black eyed man in Cleveland? I mean all black. Whites of eyes and all. The man usually wears sunglasses, and hangs out at local West side bars. Black Eyed Man Terrorizes Illinois Woman. The story of people with entirely pitch black eyes seems to be one that tugs at the very heart of the matter in paranormal cases. 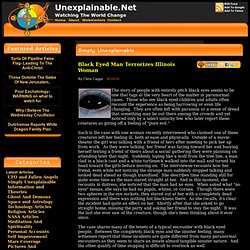 Those who see black eyed children and adults often recount the experience as being harrowing or even life changing. Have You Invited Any Black Eyed Children Into Your Home? Picture it. 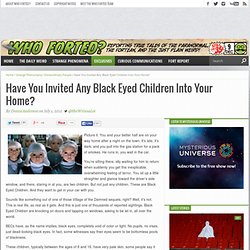 You and your better half are on your way home after a night on the town. It’s late, it’s dark, and you pull into the gas station for a pack of smokes. He runs in, you wait in the car. Dreaming of People with Black Eyes? Posted on Oct, 10 2008 @ 11:49 AM I know there have been many posts of strange dreams, but I'm wondering if anyone else has specifically had dreams where the people in them had all-black eyes. 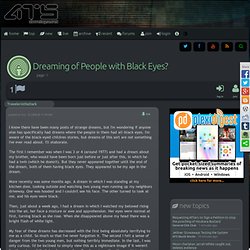 Cold Black Eyes. The same dream, it's the same damn dream every night. 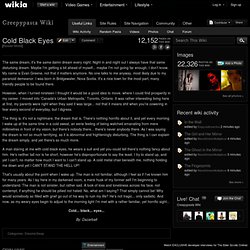 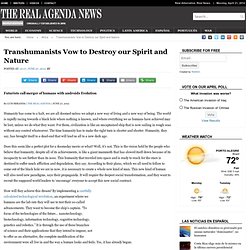 The transhuman temptation. WARNING: Giving in to the transhumanist temptation may be harmful to your spiritual and mental health. 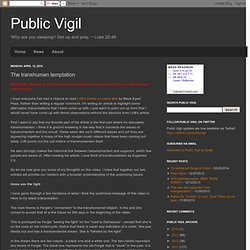 I hope everyone has had a chance to read LVB's article on Imma Bee by Black Eyed Peas. Rather than writing a regular comment, I'm writing an article to highlight some alternative interpretations that I have come up with. U.S. spy agency predicts a very transhuman future by 2030. The Transhumanist and Police State Agenda in Pop Music. Today’s pop music is filled with symbols and messages aimed to shape and mold today’s youth. Apart from the occult symbolism discussed in other articles, other parts of the elite’s agenda are communicated through music videos. Two of those parts are transhumanism and the introduction of a police state. We’ll look at the way those agendas are part of the acts of Rihanna, Beyonce, Daddy Yankee and the Black Eyed Peas. As seen in previous articles on this site, the world’s biggest stars exploit common themes in their work, permeating popular culture with a set of symbols and values.

The cohesiveness of the message that is communicated to the masses, regardless of the artists’ musical genre, attests to the influence of a “higher power” over the industry.