Civil society. The term civil society has a range of meanings in contemporary usage. 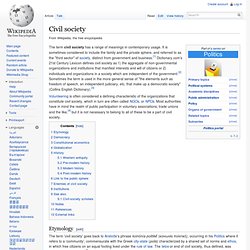 It is sometimes considered to include the family and the private sphere, and referred to as the "third sector" of society, distinct from government and business.[1] Dictionary.com's 21st Century Lexicon defines civil society as 1) the aggregate of non-governmental organizations and institutions that manifest interests and will of citizens or 2) individuals and organizations in a society which are independent of the government.[2] Sometimes the term is used in the more general sense of "the elements such as freedom of speech, an independent judiciary, etc, that make up a democratic society" (Collins English Dictionary).[3] Volunteering is often considered a defining characteristic of the organizations that constitute civil society, which in turn are often called NGOs, or NPOs. Etymology[edit] Democracy[edit] More recently, Robert D. Constitutional economics[edit] The Modern Transformation of Civil Society. The Modern Transformation of Civil Law.

Great Transition. Great Transition Stories. Stockholm Environment Institute. The Stockholm Environment Institute, or SEI, is a non-profit, independent research and policy institute specialising in sustainable development and environmental issues.[2] Mission[edit] SEI's mission is to "support decision-making and induce change towards sustainable development around the world by providing integrative knowledge that bridges science and policy in the field of environment and development. 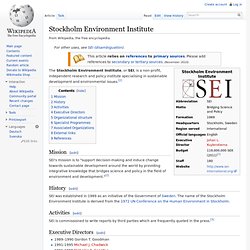 Global Scenario Group. The Global Scenario Group (GSG) was an international, interdisciplinary body convened in 1995 by the Tellus Institute and the Stockholm Environment Institute to develop scenarios for world development in the twenty-first century.[1] The GSG’s underlying scenario development work was rooted in the long-range integrated scenario analysis that Tellus Institute and Stockholm Environment Institute had undertaken through the PoleStar Project. 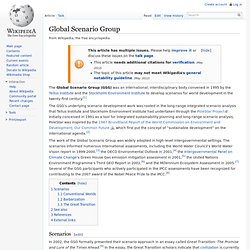 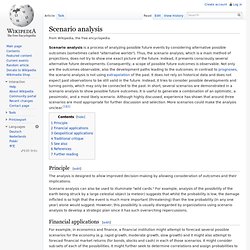 Thus, the scenario analysis, which is a main method of projections, does not try to show one exact picture of the future. Instead, it presents consciously several alternative future developments. Consequently, a scope of possible future outcomes is observable. Scenario planning. Scenario planning, also called scenario thinking or scenario analysis, is a strategic planning method that some organizations use to make flexible long-term plans. 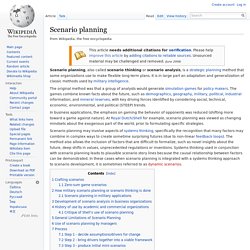 It is in large part an adaptation and generalization of classic methods used by military intelligence. The original method was that a group of analysts would generate simulation games for policy makers. The games combine known facts about the future, such as demographics, geography, military, political, industrial information, and mineral reserves, with key driving forces identified by considering social, technical, economic, environmental, and political (STEEP) trends. In business applications, the emphasis on gaming the behavior of opponents was reduced (shifting more toward a game against nature). At Royal Dutch/Shell for example, scenario planning was viewed as changing mindsets about the exogenous part of the world, prior to formulating specific strategies. 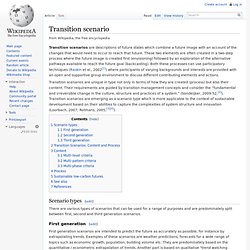 These two elements are often created in a two-step process where the future image is created first (envisioning) followed by an exploration of the alternative pathways available to reach the future goal (backcasting). Both these processes can use participatory techniques (Raskin et al., 2002[1]) where participants of varying backgrounds and interests are provided with an open and supportive group environment to discuss different contributing elements and actions. Transition scenarios are unique in type not only in terms of how they are created (process) but also their content. Intergovernmental Panel on Climate Change. The Intergovernmental Panel on Climate Change (IPCC) is a scientific intergovernmental body under the auspices of the United Nations,[1][2] set up at the request of member governments.[3] It was first established in 1988 by two United Nations organizations, the World Meteorological Organization (WMO) and the United Nations Environment Programme (UNEP), and later endorsed by the United Nations General Assembly through Resolution 43/53. 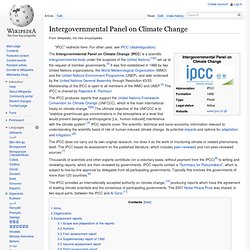 Membership of the IPCC is open to all members of the WMO and UNEP.[4] The IPCC is chaired by Rajendra K. Pachauri. The IPCC does not carry out its own original research, nor does it do the work of monitoring climate or related phenomena itself. The IPCC bases its assessment on the published literature, which includes peer-reviewed and non-peer-reviewed sources.[7] Thousands of scientists and other experts contribute (on a voluntary basis, without payment from the IPCC)[8] to writing and reviewing reports, which are then reviewed by governments. Planetary phase of civilization. The planetary phase of civilization is a concept defined by the Global Scenario Group (GSG), an environmental organization that specializes in scenario analysis and forecasting. 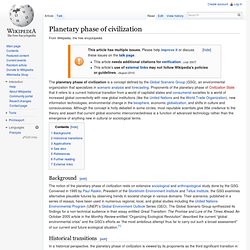 Proponents of the planetary phase of Civilization State that it refers to a current historical transition from a world of capitalist states and consumerist societies to a world of increased global connectivity with new global institutions (like the United Nations and the World Trade Organization), new information technologies, environmental change in the biosphere, economic globalization, and shifts in culture and consciousness. Although the concept is hotly debated in some circles, most reputable scientists give little credence to the theory and assert that current global economic interconnectedness is a function of advanced technology rather than the emergence of anything new in cultural or sociological terms. The Great Transition (beyond carbon) If there is one thing that defines the 21st century, it is the end of oil. 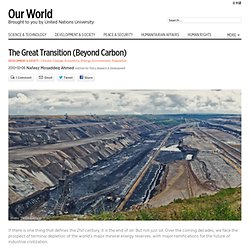 But not just oil. Post-capitalism. Socialist economics and the socialist calculation debate concern the organization and functioning of a post-capitalist system. 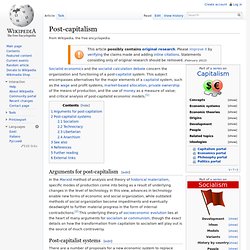 This subject encompasses alternatives for the major elements of a capitalist system, such as the wage and profit systems, market-based allocation, private ownership of the means of production, and the use of money as a measure of value; and critical analysis of post-capitalist economic models.[1] Arguments for post-capitalism[edit] Transition Towns. A transition town is a grassroot community project that seeks to build resilience in response to peak oil,[1] climate destruction, and economic instability.

Local projects are usually based on the model's initial '12 ingredients' and later 'revised ingredients'.[2][3] The first initiative to use the name was Transition Town Totnes, founded in 2006. Eco-communalism. Eco-communalism is an environmental philosophy based on ideals of simple living, self-sufficiency, sustainability, and local economies. Eco-communalists envision a future in which the economic system of capitalism is replaced with a global web of economically interdependent and interconnected small local communities. Decentralized government, a focus on agriculture, biodiversity, ethnic diversity, and green economics are all tenets of eco-communalism.

[citation needed] History[edit] Eco-communalism finds its roots in a diverse set of ideologies. Transition Management (Governance) Environmental governance. Environmental governance is a concept in political ecology and environmental policy that advocates sustainability (sustainable development) as the supreme consideration for managing all human activities—political, social and economic.[1] Governance includes government, business and civil society, and emphasizes whole system management. To capture this diverse range of elements, environmental governance often employs alternative systems of governance, for example watershed-based management.[2] It views natural resources and the environment as global public goods, belonging to the category of goods that are not diminished when they are shared.[3] This means that everyone benefits from for example, a breathable atmosphere, stable climate and stable biodiversity.

Public goods are non-rivalrous—a natural resource enjoyed by one person can still be enjoyed by others—and non-excludable—it is impossible to prevent someone consuming the good (breathing).