World Population Clock: 7 Billion People. World Population: Past, Present, and Future (move and expand the bar at the bottom of the chart to navigate through time) The chart above illustrates how world population has changed throughout history. 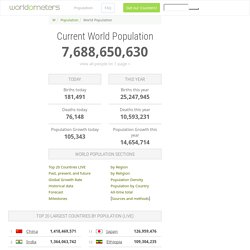 View the full tabulated data. At the dawn of agriculture, about 8000 B.C., the population of the world was approximately 5 million. Over the 8,000-year period up to 1 A.D. it grew to 200 million (some estimate 300 million or even 600, suggesting how imprecise population estimates of early historical periods can be), with a growth rate of under 0.05% per year. Maurice Strong Interview (BBC, 1972) Bill Gates talking about killing 900 million with vaccines. 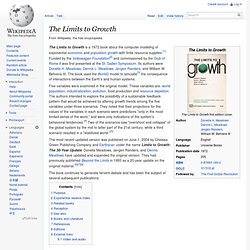 These variables are: world population, industrialization, pollution, food production and resource depletion. The authors intended to explore the possibility of a sustainable feedback pattern that would be achieved by altering growth trends among the five variables under three scenarios. They noted that their projections for the values of the variables in each scenario were predictions "only in the most limited sense of the word," and were only indications of the system's behavioral tendencies.[4] Two of the scenarios saw "overshoot and collapse" of the global system by the mid to latter part of the 21st century, while a third scenario resulted in a "stabilized world.

"[5] The most recent updated version was published on June 1, 2004 by Chelsea Green Publishing Company and Earthscan under the name Limits to Growth: The 30-Year Update. Purpose[edit] Exponential reserve index[edit] Malthusian catastrophe. A chart of estimated annual growth rates in world population, 1800–2005. 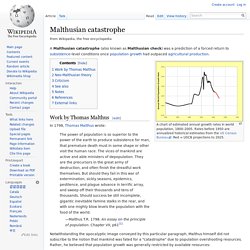 Rates before 1950 are annualized historical estimates from the US Census Bureau. Red = USCB projections to 2025. Work by Thomas Malthus[edit] In 1798, Thomas Malthus wrote: Sustainability. Achieving sustainability will enable the Earth to continue supporting human life. 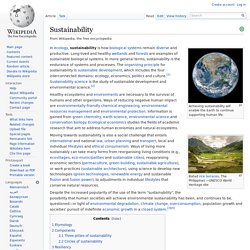 Population pyramid. This distribution is named for the frequently pyramidal shape of its graph. Overpopulation. Overpopulation occurs when a population of a species exceeds the carrying capacity of its ecological niche. 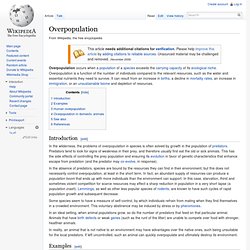 Overpopulation is a function of the number of individuals compared to the relevant resources, such as the water and essential nutrients they need to survive. It can result from an increase in births, a decline in mortality rates, an increase in immigration, or an unsustainable biome and depletion of resources. Introduction[edit] In the wilderness, the problems of overpopulation in species is often solved by growth in the population of predators. Predators tend to look for signs of weakness in their prey, and therefore usually first eat the old or sick animals. Over-consumption. CO2 emission per capita per year per country pre-2006 The theory was coined to augment the discussion of overpopulation, which reflects issues of carrying capacity without taking into account per capita consumption, by which developing nations are evaluated to consume more than their land can support.

Green parties and the ecology movement often argue that consumption per person, or ecological footprint, is typically lower in poor than in rich nations. Causes[edit] Planned obsolescence[edit] Planned obsolescence is, by definition: "a method of stimulating consumer demand by designing products that wear out or become outmoded after limited use. " Effects[edit] Human sex ratio. Tragedy of the commons. The tragedy of the commons concept is often cited in connection with sustainable development, meshing economic growth and environmental protection, as well as in the debate over global warming. 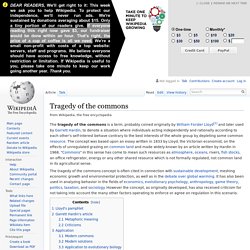 It has also been used in analyzing behavior in the fields of economics, evolutionary psychology, anthropology, game theory, politics, taxation, and sociology. However the concept, as originally developed, has also received criticism for not taking into account the many other factors operating to enforce or agree on regulation in this scenario. Lloyd's pamphlet[edit] In 1833, the English economist William Forster Lloyd published a pamphlet which included an example of herders sharing a common parcel of land on which they are each entitled to let their cows graze. In English villages, shepherds had sometimes grazed their sheep in common areas, and sheep ate grass more severely than cows. 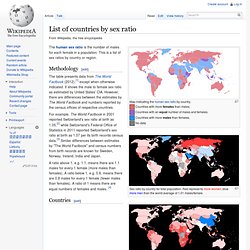 What's it called when the death rate is higher than the birth rate. U3A Third Agers & the Vanishing Young. Population Reference Bureau. Population Facts - Birth and Death Rates. Birth rate. Definition: This entry gives the average annual number of births during a year per 1,000 persons in the population at midyear; also known as crude birth rate. 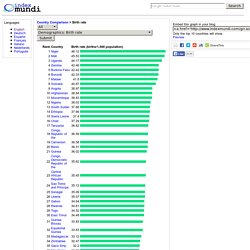 The birth rate is usually the dominant factor in determining the rate of population growth. It depends on both the level of fertility and the age structure of the population. Birth rate by country - Thematic Map - World. NVSS - Mortality Tables - General Mortality - GMWK291R. The World Almanac. Europa World Year Book. The Europa World Year Book provides detailed country surveys containing analytical, statistical and directory data available for over 250 countries and territories. 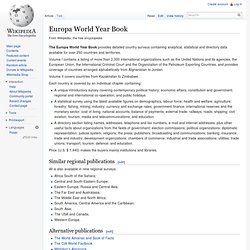 Volume I contains a listing of more than 2,000 international organizations such as the United Nations and its agencies, the European Union, the International Criminal Court and the Organization of the Petroleum Exporting Countries, and provides coverage of countries arranged alphabetically from Afghanistan to Jordan. Volume II covers countries from Kazakhstan to Zimbabwe. Each country is covered by an individual chapter containing: Price (U.S. $ 1,440) makes the buyers mainly institutions and libraries. Whitaker's Almanack. Front cover of the 2006 Almanack, the 138th edition, published by A & C Black. 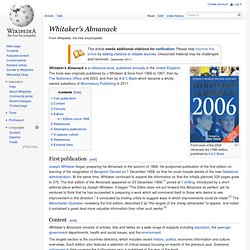 Whitaker's Almanack is a reference book, published annually in the United Kingdom. The book was originally published by J Whitaker & Sons from 1868 to 1997, then by The Stationery Office until 2003, and then by A & C Black which became a wholly owned subsidiary of Bloomsbury Publishing in 2011. First publication[edit] Content[edit] Whitaker's Almanack consists of articles, lists and tables on a wide range of subjects including education, the peerage, government departments, health and social issues, and the environment.

The largest section is the countries directory, which includes recent history, politics, economic information and culture overviews. Whitaker's Almanack is not an encyclopedia but more of a yearbook of contemporary matters and a directory of various establishments in the UK (such as clubs, public bodies and universities). Der Fischer Weltalmanach. The Statesman's Yearbook. The Statesman's Yearbook is a one-volume reference book providing information on the countries of the world. It is published by Palgrave Macmillan. The first edition[edit] History[edit] Railway map of Africa, including tracks proposed and under construction, The Statesman's Yearbook, 1899. Frederick Martin presided over the book for twenty years, during which time it became established as a leading reference work.

TIME Almanac with Information Please. New York Times Almanac. The World Factbook. Startseite: Fischer Weltalmanach. Whitaker's Almanack. Europa World Online : Home. Human Carrying Capacity Is Determined by Food Availability. Senescence. Senescence is not the inevitable fate of all organisms. Organisms of some taxonomic groups (taxa), including some animals, even experience chronological decrease in mortality, for all or part of their life cycle.[1] On the other extreme are accelerated aging diseases, rare in humans. There is also the extremely rare and poorly understood "Syndrome X", whereby a person remains physically and mentally an infant or child throughout one's life.[2][3] Even if environmental factors do not cause aging, they may affect it; in such a way, for example, overexposure to ultraviolet radiation accelerates skin aging. World Almanac Kor Kids. Surveys and Data Collection Systems Homepage.

Some NCHS data systems and surveys are ongoing annual systems while others are conducted periodically. There are four major data collection programs at NCHS: AARP The Journal. Death Rates for 113 causes WorkTable291R.pdf. Data Access - National Death Index. 2011 Deaths are now available. The HolySee and The Declaration of Human Rights.pdf. Demographics of Russia. Population Decline in Russia. Russian President Vladimir Putin recently directed his nation's parliament to develop a plan to reduce the country's falling birthrate.