Yarn Bombing Made Easy. How To Yarn Bomb. I get asked all the time "How do you yarn bomb exactly? 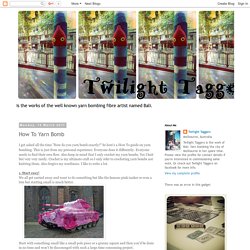 " Not Your Grandma's Knitting: 20 Incredible Yarn Bombs. While certain types of permanent graffiti can be a very beautiful addition to an otherwise bland space, much of the time it's unattractive and a pain to remove. 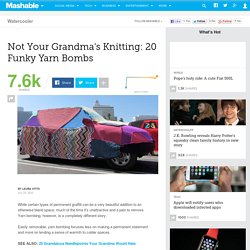 Yarn bombing, however, is a completely different story. Easily removable, yarn bombing focuses less on making a permanent statement and more on lending a sense of warmth to colder spaces. From bike racks to buses, yarn bombers seem to have found a way to add a knit cover to almost any type of outdoor item. Check out 20 of the most impressive, stringy works — they just might inspire you to craft something of your own. 2410 × 2297 - artsyforager.wordpress.com. 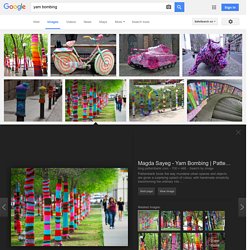 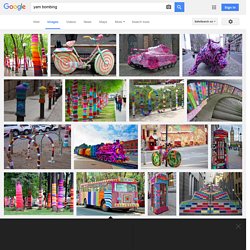 We make, install, maintain, and remove the vast majority of our work and almost always get permission to install. 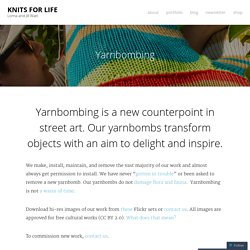 We have never “gotten in trouble” or been asked to remove a new yarnbomb. Our yarnbombs do not damage flora and fauna. Yarnbombing is not a waste of time. Download hi-res images of our work from these Flickr sets or contact us. All images are approved for free cultural works (CC BY 2.0). To commission new work, contact us. View our portfolio here. String art by Lorna Watt. How to Yarn Bomb: Tips & Tricks from a Pro. Have you seen trees and statues covered with brightly covered yarn in your neighborhood and wondered how it was done? 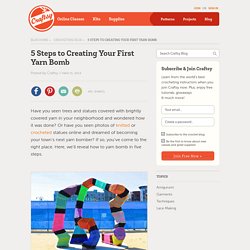 Or have you seen photos of knitted or crocheted statues online and dreamed of becoming your town’s next yarn bomber? If so, you’ve come to the right place. Here, we’ll reveal how to yarn bomb in five steps. Photo via of Oakland Art Enthusiast What is a yarn bomb? A yarn bomb is form of street art where yarn in any form (knit, crochet, latch hook, cross stitch, amigurumi, or simply wrapped) is attached to an object in the public environment. How to yarn bomb: Step 1: Find the object you would like to yarn bomb. If you plan to knit or crochet a fabric, then choose a 3-D object that you can sew your fabric around, like a tree, street post or statue. Yarn bombing. Yarn bombing, yarnbombing, yarn storming, guerrilla knitting, kniffiti, urban knitting or graffiti knitting is a type of graffiti or street art that employs colourful displays of knitted or crocheted yarn or fibre rather than paint or chalk. 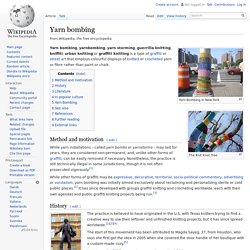 Method and motivation[edit] While yarn installations – called yarn bombs or yarnstorms – may last for years, they are considered non-permanent, and, unlike other forms of graffiti, can be easily removed if necessary. Nonetheless, the practice is still technically illegal in some jurisdictions, though it is not often prosecuted vigorously.[1] Yarn bombing. A.files.bbci.co. Nurses - "The Role of Women in World War One" Description of the Role of the Nurses and Field Hospitals in WWI. World War One, The Great War, WW1. Contributions to this section are very welcome but of necessity there are caveats:- Copyright permission is essential for those items still in copyright. 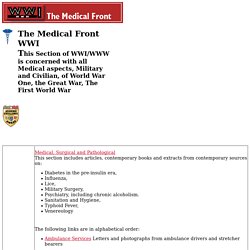 We are endeavouring to maintain the quality of any modern articles that will be published in the site as being of the same quality that is required for academic or professional journals. This means that all original contributions will need to be referenced and, as with academic or professional journals, we reserve the right to submit any article to our panel of medical historical referees. For further information, or for correspondence, please contact Dr. A War Nurse's Diary. Sketches from a Belgian Field Hospital (1918). Table of Contents. Great War Photos. The German Crimson Field The Crimson Field is a new BBC drama which has been received with what can be best described as mixed feelings by Great War enthusiasts on Twitter. 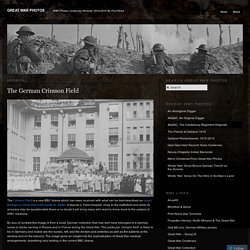 It depicts a ‘Field Hospital’ close to the battlefield and while its accuracy may be questionable there is no doubt it will bring many who want to know more to the subject of WW1 medicine. By way of contrast this image is from a small German collection that may well have belonged to a German nurse or doctor serving in Russia and in France during the Great War. This particular ‘crimson field’ is likely to be in Germany and visible are the nurses, left, and the doctors and orderlies as well as the patients at the window and on the balcony.

The image gives an insight into the sophistication of Great War medical arrangements, something very lacking in the current BBC drama. The Real Crimson Field: Nurses in France 1918 German Nurses On The Eastern Front WW1 Indian Army: Indian Wounded at Brighton 1914. CEUFast.com. Return to Articles Mainpage Author: Julia Tortorice World War I was a profound event that played an important role in the placement and future advancement of women within the military. 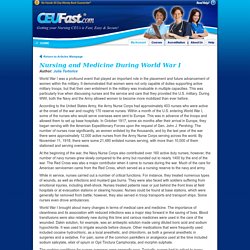 It demonstrated that women were not only capable of duties supporting active military troops, but that their own enlistment in the military was invaluable in multiple capacities. WW1 Field Hospitals 220462-01. Field hospitals during WW1. WW1 - Nurses. The Nurses. New Zealand and the First World War - First World War - overview. On 28 June 1914 Archduke Franz Ferdinand, heir to the throne of the Austro-Hungarian Empire, and his wife Sophie were assassinated in the Bosnian city of Sarajevo.

The fallout from this faraway event would ultimately claim the lives of 18,000 New Zealanders and lead to the wounding of 41,000. Places thousands of miles from home with exotic-sounding names such as Gallipoli, Passchendaele and the Somme etched themselves in national memory during the First World War. The war took approximately 100,000 New Zealanders overseas, many for the first time. World War I. World War I (WWI or WW1), also known as the First World War, or the Great War, was a global war centred in Europe that began on 28 July 1914 and lasted until 11 November 1918.

More than 70 million military personnel, including 60 million Europeans, were mobilised in one of the largest wars in history. Over 9 million combatants and 7 million civilians died as a result of the war (including the victims of a number of genocides), a casualty rate exacerbated by the belligerents' technological and industrial sophistication, and the tactical stalemate caused by trench warfare, a grueling form of warfare in which the defender held the advantage. World War I Facts and Information for Kids. World War 1 was a military conflict lasting from 1914 to 1918 which involved nearly all the biggest powers of the world.