PolycomApp. Lessons using iPads - ICT with Miss C. ▶ Review: iXpand Flash Drive adds easy-to-use extra storage to your iPad and iPhone. With iPhones and iPads snapping 8-megapixel images and HD video like it’s going out of style, storage can quickly become an issue—especially as Apple has kept the entry-level models at 16GB even while increasing storage for the higher-end versions. 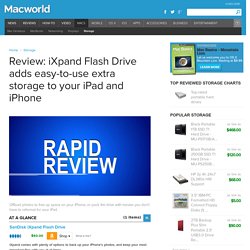 This can be an especially sticky problem while traveling, and not just because you take more photos and video clips. Maybe you can’t upload your images to cloud storage without a data connection, maybe you’re about to run up against your data plan’s ceiling, maybe hotel Wi-Fi costs too much and performs terribly, and maybe you didn’t bring your laptop to offload images to its hard drive.

SanDisk’s iXpand Flash Drive has you covered. iXpand is a small, portable flash drive with both USB and Lightning connectors. iBridge: Add external storage to your iPhone, iPad. You can buy the latest iPhone and iPad with 128GB of storage, but many get less due to the high cost. 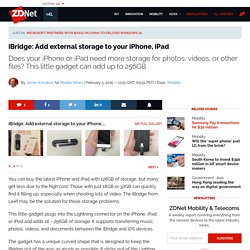 Those with just 16GB or 32GB can quickly find it filling up, especially when shooting lots of video. The iBridge from Leef may be the solution for those storage problems. This little gadget plugs into the Lightning connector on the iPhone, iPad, or iPod and adds 16 - 256GB of storage. It supports transferring music, photos, videos, and documents between the iBridge and iOS devices. The gadget has a unique curved shape that is designed to keep the iBridge out of the way as much as possible. The end of the iBridge that hides behind the iDevice has a full USB connector.

The iBridge requires an app on iOS to interact with the device. The app has settings for dealing with the iBridge, plus a content viewer, a camera app, and a file transfer app all rolled up into the main app. The camera app is a basic way to take photos that are stored directly onto the iBridge. Some Very Good iPad Apps for Music Teachers. September 19, 2015 Today we revisited the iPad list of music apps we shared last year and wanted to add some interesting new apps to it. 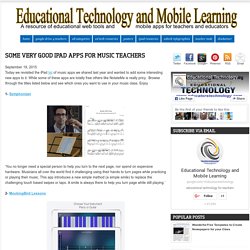 While some of these apps are totally free others like NotateMe is really pricy. Browse through the titles listed below and see which ones you want to use in your music class. Enjoy 1- Symphonizer ‘You no longer need a special person to help you turn to the next page, nor spend on expensive hardware. iPad Apps and Resources for Teachers. The Ultimate Guide to Using iPads in the Classroom. Congratulations! 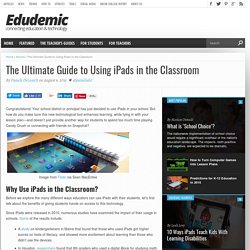 Your school district or principal has just decided to use iPads in your school. But how do you make sure this new technological tool enhances learning, while tying in with your lesson plan—and doesn’t just provide another way for students to spend too much time playing Candy Crush or connecting with friends on Snapchat? Image from Flickr via Sean MacEntee. Home. iPads in sport – four of my favourite apps! They seem polar opposites don’t they? 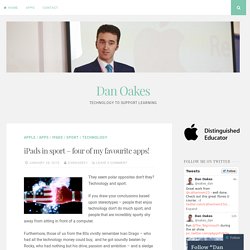 Technology and sport. If you draw your conclusions based upon stereotypes – people that enjoy technology don’t do much sport, and people that are incredibly sporty shy away from sitting in front of a computer. Furthermore, those of us from the 80s vividly remember Ivan Drago – who had all the technology money could buy, and he got soundly beaten by Rocky, who had nothing but his drive, passion and ambition – and a sledge full of stones, to help him train. However technology for years now has played a massive role in maximising the performance and potential of athletes and sports people, and now, thanks to the iPad the very same is happening in schools.

How to Use Miracast Screen Mirroring from Windows or Android. Miracast is a wireless display standard included in Windows 8.1, Android 4.2, and newer versions of these operating systems. 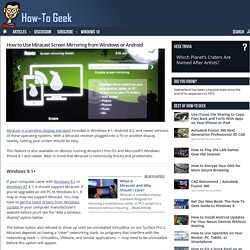 With a Miracast receiver plugged into a TV or another display nearby, casting your screen should be easy. This feature is also available on devices running Amazon’s Fire OS and Microsoft’s Windows Phone 8.1 and newer. Bear in mind that Miracast is notoriously finicky and problematic. Windows 8.1+ If your computer came with Windows 8.1 or Windows RT 8.1, it should support Miracast. The below option also refused to show up until we uninstalled VirtualBox on our Surface Pro 2. To access the Miracast options, swipe in from the right or press Windows Key + C and select the Devices charm. If you see an “Add a wireless display” option, your computer supports Miracast. These options are also available in PC Setting. Android 4.2+

iPad Apps for High School. iOS 8 Tips and Tricks for iPad - Apple Support. Coding on iPads – Beginner to Pro. Code and programming may not be the most important topics on the planet but it is an area of study that sufferers two major problems. one: an industry with millions of unfilled job positions and two: a world where not enough teachers feel confident to run programming projects. 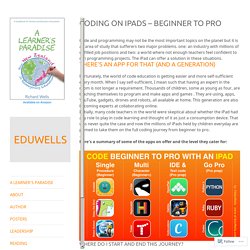 The iPad can offer a solution in these situations. There’s an app for that (and a generation) Fortunately, the world of code education is getting easier and more self-sufficient every month. When I say self-sufficient, I mean such that having an expert in the room is not longer a requirement. Thousands of children, some as young as four, are teaching themselves to program and make apps and games . Initially, many code teachers in the world were skeptical about whether the iPad had any role to play in code learning and thought of it as just a consumption device. 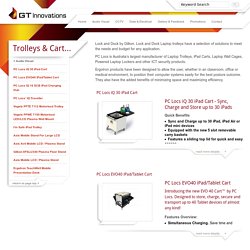 Using iTunes® on your MacBook®, you can sync up to 30 iPad, iPad Air or iPad mini devices simultaneously.* Go mobile! Laptop Trolleys, Netbook Trolleys, iPad Trolleys, Laptop Storage and Security - Lock & Dock. Tutorials. 5 Ways to View PowerPoint Presentation on iPad. Have a pile of PowerPoint presentation files and wanna view them on your new iPad? 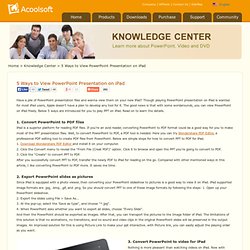 Though playing PowerPoint presentation on iPad is wanted for most iPad users, Apple doesn't have a plan to develop any tool for it. The good news is that with some wordarounds, you can view PowerPoint on iPad freely. Below 5 ways are introduced for you to play PPT on iPad. Read on to learn the details. 1. iPad is a superior platform for reading PDF files. 1. 2. Tips for Using iPads in the Classroom. While for some teachers, iPads in the classroom are already a familiar part of everyday life, as of Pearson’s 2014 Student Mobile Device Survey, only 16% of students attended schools that provide tablets 1:1. 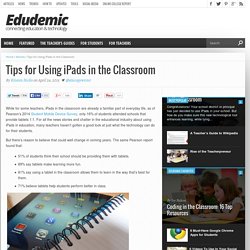 For all the news stories and chatter in the educational industry about using iPads in education, many teachers haven’t gotten a good look at just what the technology can do for their students. But there’s reason to believe that could well change in coming years. The same Pearson report found that: 51% of students think their school should be providing them with tablets.89% say tablets make learning more fun.81% say using a tablet in the classroom allows them to learn in the way that’s best for them.71% believe tablets help students perform better in class. iPurpose before iPad. The two above images are good examples of purposeful thinking about iPad usage in schools. One, a screenshot of an oft-used tool known as iPad As.. by edtechteacher.org, focuses on what the iPad can be used for and provides links to various apps that can be utilised for those functions.

It goes without saying that it is a very useful website for schools thinking about iPads. It provides nutshell explanations of a number of apps that relate to each iPad as… category as well as pricing. It’s a good introduction into the functionality of the iPad that counteracts the misconception of iPad as consumption NOt creation tool. The other, The Padagogy Wheel, is one of many variations on applying Bloom’s Taxonomy of skills to iPad apps.

Lock iPAD screen & iPhone screen so kids stay within the app. Since I posted How to Child-proof iPAD, I received so many questions asking how to lock iPAD screen or iPhone screen, so kids stay within the app you want them to play. Now we found the solution – Daisy Simpson, our new reviewer at iGameMom is going to share the trick with you. If you want to stay updated with iGameMom app recommendations and tech tips, please sign up for the free email updates . VSC iPad Tips and Tricks. Lessons using iPads - ICT with Miss C. How to Use Green Screen Effects on iPads. Making Movies Magical These days, very little comes out of Hollywood without special effects added in post-production. Our favorite superhero movies, science fiction thrillers and fast-paced action movies just wouldn't be the same without them.

However, these video effects are no longer the preserve of video professionals.