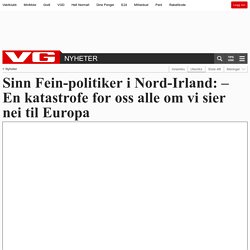 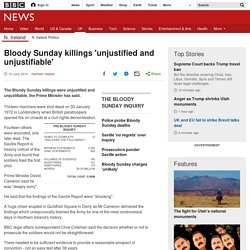 Thirteen marchers were shot dead on 30 January 1972 in Londonderry when British paratroopers opened fire on crowds at a civil rights demonstration. Fourteen others were wounded, one later died. The Saville Report is heavily critical of the Army and found that soldiers fired the first shot. Prime Minister David Cameron said he was "deeply sorry". THE POLICE LYRICS - Invisible Sun. "Invisible Sun" (One, two, three, four, five, six Oh oh oh oh oh oh) I don't want to spend the rest of my life Looking at the barrel of an Armalite I don't want to spend the rest of my days Keeping out of trouble like the soldiers say I don't want to spend my time in hell Looking at the walls of a prison cell I don't ever want to play the part Of a statistic on a government chart There has to be an invisible sun It gives its heat to everyone There has to be an invisible sun That gives us hope when the whole day's done It's dark all day and it glows all night Factory smoke and acetylene light I face the day with me head caved in Looking like something that the cat brought in. 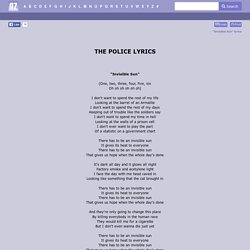 Tim Brannigan, a real black Irish republican. When Tim Brannigan was 19 he found out who he really was. 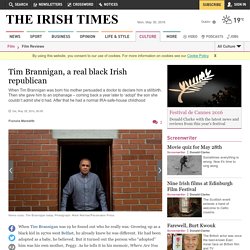 Growing up as a black kid in 1970s west Belfast, he already knew he was different. He had been adopted as a baby, he believed. Northern Ireland – Where Conflict Remains. On Friday night (15th April) in Belfast, Michael McGibbon, a 33 year old father of four was violently murdered by two youths who fatally shot him four times. 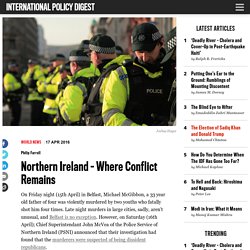 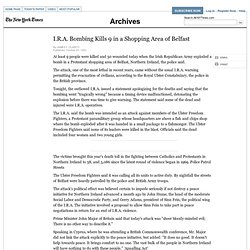 CLARITY,Published: October 24, 1993 At least 9 people were killed and 50 wounded today when the Irish Republican Army exploded a bomb in a Protestant shopping area of Belfast, Northern Ireland, the police said. The attack, one of the most lethal in recent years, came without the usual I.R.A. warning permitting the evacuation of civilians, according to the Royal Ulster Constabulary, the police in the British province. Tonight, the outlawed I.R.A. issued a statement apologizing for the deaths and saying that the bombing went "tragically wrong" because a timing device malfunctioned, detonating the explosion before there was time to give warning.

Northern Ireland: A brief background to the conflict. FAQs ABOUT NORTHERN IRELAND Ireland's history is a long story of suffering, suppression and poverty, but also one of strong people who refuse to give up and who manage to see things from a humorous side in the face of hardship. 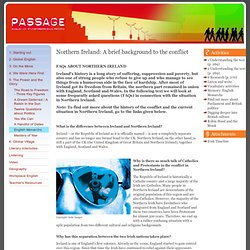 After most of Ireland got its freedom from Britain, the northern part remained in union with England, Scotland and Wales. Belfast riots: 56 police officers injured during parade protests. 10 August 2013Last updated at 11:53 ET Northern Ireland Chief Constable Matt Baggott condemned the rioters. 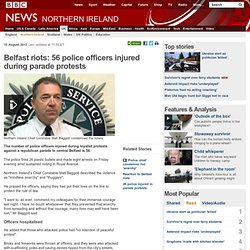 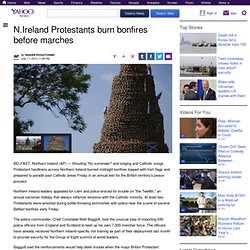 " and singing anti-Catholic songs, Protestant hardliners across Northern Ireland burned midnight bonfires topped with Irish flags and prepared to parade past Catholic areas Friday in an annual test for the British territory's peace process. Northern Ireland leaders appealed for calm and police braced for trouble on "the Twelfth," an annual sectarian holiday that always inflames tensions with the Catholic minority. At least two Protestants were arrested during bottle-throwing skirmishes with police near the scene of several Belfast bonfires early Friday. The police commander, Chief Constable Matt Baggott, took the unusual step of importing 630 police officers from England and Scotland to beef up his own 7,000-member force. 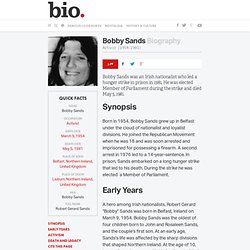 13 spørsmål og svar om Nord Irland. Irelands history is a long story about suffering, suppression and poverty, but also one of strong people who refuse to give up and who manage to see things from a humorous side in the face of hardship. After most of Ireland got its freedom from Britain, the northern part remained in union with England, Scotland and Wales. In the following text we will look at some frequently asked questions (FAQ) in connection with the situation in Northern Ireland. What is the difference between Ireland and Northern Ireland? Ireland – or the Republic of Ireland as it is officially named – is now a completely separate country and has no longer any formal bond to the UK. Northern Ireland, on the other hand, is still a part of the UK (the United Kingdom of Great Britain and Northern Ireland), together with England, Scotland and Wales.Therefore, Northern Ireland is now isolated from Ireland. Sinead O'Connor - This Is A Rebel Song.