The corridor of uncertainty: We have always been easily distracted. A recurring story in the media is that our powers of attention and concentration have been seriously eroded by the rise of digital communication and in particular social media. 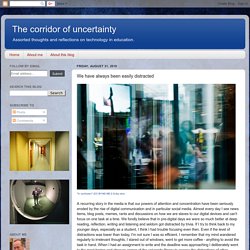 Almost every day I see news items, blog posts, memes, rants and discussions on how we are slaves to our digital devices and can't focus on one task at a time. We fondly believe that in pre-digital days we were so much better at deep reading, reflection, writing and listening and seldom got distracted by trivia. If I try to think back to my younger days, especially as a student, I think I had trouble focusing even then.

Even if the level of distractions was lower than today, I'm not sure I was so efficient. I remember that my mind wandered regularly to irrelevant thoughts, I stared out of windows, went to get more coffee - anything to avoid the task in hand. Maybe we've always been easily distracted. 25 years of EdTech – 1996: CMC. I’m revisiting the previous post on Bulletin Board Systems slightly here. 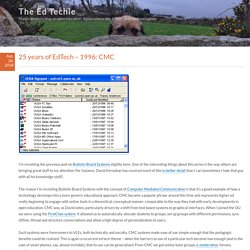 One of the interesting things about this series is the way others are bringing great stuff to my attention. For instance, David Kernohan has covered much of this in better detail than I can (sometimes I hate that guy with all his knowledge stuff). The reason I’m revisiting Bulletin Board Systems with the concept of Computer Mediated Communication is that it’s a good example of how a technology develops into a more generic educational approach. CMC became a popular phrase around this time and represents higher ed really beginning to engage with online tools in a theoretical, conceptual manner, comparable to the way they had with early developments in open education. CMC was, as David notes, particularly driven by a shift from text based systems to graphical interfaces. Such systems were forerunners to VLEs, both technically and socially. The Mixxer - a free educational website for language exchanges via Skype. 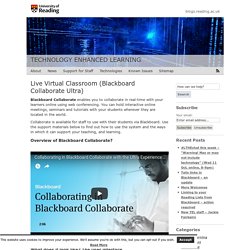 You can hold interactive online meetings, seminars and tutorials with your students wherever they are located in the world. Collaborate is available for staff to use with their students via Blackboard. Use the support materials below to find out how to use the system and the ways in which it can support your teaching, and learning. Tele-proximity: Tele-community of Inquiry Model. Facial Cues for Social, Cognitive, and Teacher Presence in Distance Education. Telecollaboration: Group Dynamics and Community Building – Learn Experience Teach.

The research question was: What linguistic and social behaviors define the process of forming a community and becoming full participants in the community? 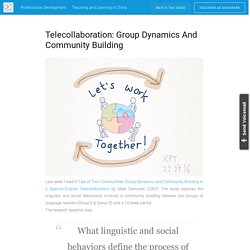 What stands out for me in the guiding question are the learning metaphors of community and participation, key areas to consider as I design my own research project. Simply speaking, Community refers to a group of people sharing either a physical location, and/or interests and ideas. Social interaction drives language learning game. Provided Players in Crystallize learn new words by observing conversations. 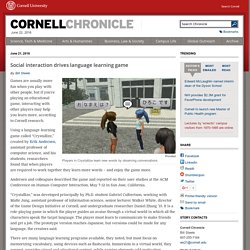 Games are usually more fun when you play with other people, but if you’re playing an educational game, interacting with other players may help you learn more, according to Cornell research. Using a language-learning game called “Crystallize,” created by Erik Andersen, assistant professor of computer science, and his students, researchers found that when players are required to work together they learn more words – and enjoy the game more. Andersen and colleagues described the game and reported on their user studies at the ACM Conference on Human-Computer Interaction, May 7-12 in San Jose, California. “Crystallize,” was developed principally by Ph.D. student Gabriel Culbertson, working with Malte Jung, assistant professor of information science, senior lecturer Walker White, director of the Game Design Initiative at Cornell, and undergraduate researcher Daniel Zhang ’15. 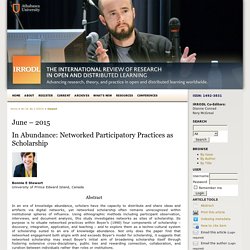 Have You Ever Been on a Wild Goose Chase? Would you believe that the defrazzalator on our OctoPlasmaBot 9000 just broke? 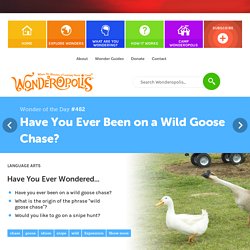 We needed a new one badly, so we set out in search of a replacement. We checked every grocery store, gas station, yogurt shop and shoe retailer in a 100-mile radius. Unfortunately, our search turned out to be nothing but a wild goose chase. Apparently, they don’t even make defrazzalators or OctoPlasmaBot 9000s any longer! You’re probably wondering what in the world we’re talking about. How Technology Can Help Language Learning  Howard Gardner's theory of Multiple Intelligences proposed in 1989, which may be grossly summarized as "students possess different kinds of minds and therefore learn, remember, perform, and understand in different ways", despite eliciting much controversy, has had a profound impact on education, especially in America. 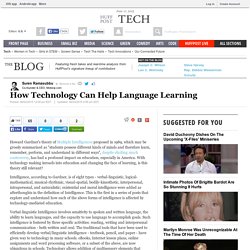 With technology making inroads into education and changing the face of learning, is this theory still relevant? Intelligence, according to Gardner, is of eight types - verbal-linguistic, logical-mathematical, musical-rhythmic, visual-spatial, bodily-kinesthetic, interpersonal, intrapersonal, and naturalistic; existential and moral intelligence were added as afterthoughts in the definition of Intelligence. This is the first in a series of posts that explore and understand how each of the above forms of intelligence is affected by technology-mediated education.

The ICTell (Intercultural telecollaborative learning) Project: Virtual exchanges to prepare student mobility. Identity and participation in telecollaboration. So Texting Can Actually Boost Your Self-Esteem. We often hear about how the internet is bumming us out, but it's not all bad: Recent research suggests that, by making us more candid, chatting online is pulling us closer to our family and friends. 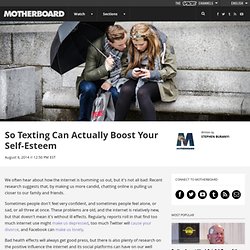 Sometimes people don't feel very confident, and sometimes people feel alone, or sad, or all three at once. These problems are old, and the internet is relatively new, but that doesn't mean it's without ill effects. Regularly, reports roll in that find too much internet use might make us depressed, too much Twitter will cause your divorce, and Facebook can make us lonely. Identity Negotiations of Young Active Facebook Users: What Does it mean? This report is a study of the identity negotiations of young active Facebook users through their online significant others. 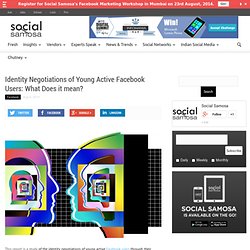 The following research investigates the identity negotiations in the life of a Facebook user. The important research question is ‘how’ a young active Facebook user alters or extends his circle of significant other. Significant other implies a person whom one looks up to for affirmation or negation. 5 Ways Video Conferencing Is Bringing Exciting Collaborative Interaction To Teaching and Learning. Many of us are familiar with the use of computers, iPads, Smart Boards, and other technological tools in today’s classrooms.

One relatively untapped tool for our classrooms is video conferencing. There are so many exciting possibilities that come with being able to see, hear, and communicate with people all over the world from the comfort of your classroom (or wherever you are learning).

Sociedad y Tecnología: Infographic: Why aren’t your students participating on the Discussion Board? Exchange 2.0. Journal of Computer-Mediated Communication. Some myths surrounding e-safety. In the opening lines of his book, The Better Angels of Our Nature, Stephen Pinker establishes that “believe it or not – and many people do not – violence has declined over long stretches of time, and today we may be living in the most peaceable era in our species’ existence”.

He then reaches the conclusion that “no matter how small the percentage of violent deaths may be, in absolute numbers there will always be enough to fill the evening news, so people’s impressions of violence will be disconnected from the actual proportions”. I wonder to what extent we are seeing a similar effect when we scrutinise the kind of discourse that surrounds the use of technology by children. The very name e-safety conjures a negative discourse in which we focus on the dangerous aspects of using technology, generally communications technology, and ignore the huge potential technology can offer education. A short history of misaprehension What about all the inappropriate content? Notes on overcoming loneliness: Make fewer ‘friends’ Ten years ago we’d never heard of names like Twitter, Facebook, Instagram and Whatsapp. And yet today, for many, they are modern pillars of daily communication.

Does technology really cut us off from other people? Jeremy Adam Smith, Web Editor & Producer, Greater Good Science Center | 3/20/14 | | Smarthphones and social media are changing our daily lives and our society. It’s now normal to see two people at a dinner table fiddling with their phones—and why not? They probably first met each other through their phones, on a dating site like OKCupid.

‘Un autre monde/ Eine andere Welt : Echan. Resources for online facilitators. Increasing Interaction in Online Learning Envir. Computer mediated communication. Rebtel updates VoIP app on Android to take on S. What's it like to actually teach online? - Conc. How SMS is becoming a digital-lingual cultural. What’s it like to actually teach online? I entered the online college classroom where I teach – the one that exists in that ethereal world inside the computer, on the internet and across the wi-fi airwaves – to see that students had scrawled the words “Bonjour!” And “Go, Sox!” On the virtual whiteboard of our French I course. The early students gathered for our synchronous (“real time”) session chatted via their microphones before my arrival.

Student mobility is on the rise. A previous Communiqué of the Conference of European Ministers Responsible for Higher Education set a target of at least 20% of those graduating in the European higher education area having participated in a study or training period abroad by 2020. While this aim is very desirable, it does beg the question: What about the remaining 80% of students who may not engage in some kind of physical mobility during their studies? The need to expose the maximum number of students to the benefits of working and interacting with members of other cultures has led many educators to engage their students in telecollaborative or online intercultural exchange projects with partner students in distant locations around the globe. These exchanges usually involve collaborative project work using two or more languages.

Online Intercultural Exchan... Living Without the Internet. Three Elements of Great Communication, Accordin... Three Elements of Great Communication, According to Aristotle - Scott Edinger. By Scott Edinger | 9:00 AM January 17, 2013 In my nearly 20 years of work in organization development, I’ve never heard anyone say that a leader communicated too much or too well. On the contrary, the most common improvement suggestion I’ve seen offered up on the thousands of 360 evaluations I’ve reviewed over the years is that it would be better if the subject in question learned to communicate more effectively.

What makes someone a good communicator? There’s no mystery here, not since Aristotle identified the three critical elements — ethos, pathos, and logos. — thousands of years ago. Ethos is essentially your credibility — that is, the reason people should believe what you’re saying. Pathos is making an emotional connection — essentially, the reason people believe that what you’re saying will matter to them. But all the authority and empathy in the world won’t really help you if people don’t understand what you’re talking about or how you came to your conclusions.