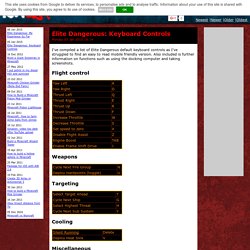 Also included is further information on functions such as using the docking computer and taking screenshots. Flight control Weapons Targeting Cooling Miscellaneous Docking Computer There is no docking computer key. Screenshots Take Elite Dangerous screenshots by pressing F10. Power Distribution The arrow keys change the power distribution between ship systems, engine and weapons. [SYS] - increase shield resistance and recharge rate of the system capacitor used to recharge the shields and other modules. Silent Running When enabled shields shut down and heat radiators are disabled to reduce your ship's signature to near zero. Related articles Elite Dangerous: My Experience So Far Comments(0) The Division Guide: How To Farm Experience Points, Loot And Credit In Dark Zone. Community Intelligence - Collective Knowledge. 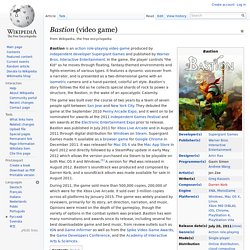 Interactive Entertainment. In the game, the player controls "the Kid" as he moves through floating, fantasy-themed environments and fights enemies of various types. It features a dynamic voiceover from a narrator, and is presented as a two-dimensional game with an isometric camera and a hand-painted, colorful art style. Bastion '​s story follows the Kid as he collects special shards of rock to power a structure, the Bastion, in the wake of an apocalyptic Calamity. During 2011, the game sold more than 500,000 copies, 200,000 of which were for the Xbox Live Arcade. The Kid fights in a floating, grassy ruin, aiming a bow at a monster. Between levels, the Kid visits the Bastion, where the player can use fragments—the game's form of currency—that they have accrued to buy materials and upgrade weapons.

Bastion was released to strong sales and critical acclaim. Best of 2014: The indie games we adore. Gaming execs:Join 180 select leaders from King, Glu, Rovio, Unity, Facebook, and more to plan your path to global domination in 2015. 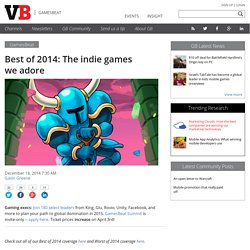 GamesBeat Summit is invite-only -- apply here. Ticket prices increase on April 3rd! Check out all of our Best of 2014 coverage here and Worst of 2014 coverage here. Independent game development is the foremost frontier for exploring new ideas and concepts in a medium too often hampered by a need to retread the same ground. 2014 brought with it a surge in early access releases and the first big fruits of the crowdfunding craze, making the creation and release of these indie titles often as experimental or temperamental as their subject material. We waded through the releases of this past year and selected the 15 sharpest, most creative, and most addictive indie games of 2014, listed below in order of release date. Nidhogg. Offworld Trading Company v0.1.5062-P2P. 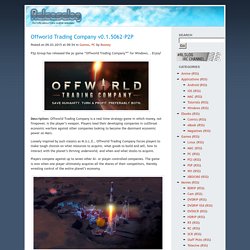 Enjoy! Description: Offworld Trading Company is a real-time strategy game in which money, not firepower, is the player’s weapon. Players lead their developing companies in cutthroat economic warfare against other companies looking to become the dominant economic power on Mars. Loosely inspired by such classics as M.U.L.E., Offworld Trading Company forces players to make tough choices on what resources to acquire, what goods to build and sell, how to interact with the planet’s thriving underworld, and when and what stocks to acquire. Players compete against up to seven other AI- or player-controlled companies. Key Features: This War of Mine v1.2.2 Incl War Child Charity DLC Cracked-3DM. Group 3DM has released the latest version of pc game “This War of Mine”. 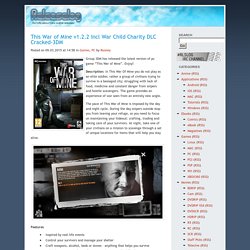 Enjoy! Description: In This War Of Mine you do not play as an elite soldier, rather a group of civilians trying to survive in a besieged city; struggling with lack of food, medicine and constant danger from snipers and hostile scavengers. The game provides an experience of war seen from an entirely new angle. The pace of This War of Mine is imposed by the day and night cycle. During the day snipers outside stop you from leaving your refuge, so you need to focus on maintaining your hideout: crafting, trading and taking care of your survivors. Features Inspired by real-life eventsControl your survivors and manage your shelterCraft weapons, alcohol, beds or stoves – anything that helps you surviveMake decisions – an often unforgiving and emotionally difficult experienceRandomized world and characters every time you start a new gameCharcoal-stylized aesthetics to complement the game’s theme. Best Xbox 360, PS3, Wii U, 3DS, PS Vita, Blu-ray, DVD, Clothing, Gift & Toy Products from Zavvi.