What are the main technical differences between Prolog and miniKanren, with respect to logic programming? Learn Prolog Now! Best Prolog language books. Most of Prolog textbooks are dull and examples are artificial and repetitive. 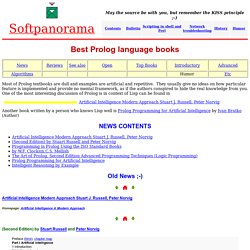 They usually give no ideas on how particular feature is implemented and provide no mental framework, as if the authors conspired to hide the real knowledge from you. Haskell vs Prolog, or "Giving Haskell a choice" - xkcd. I've become more and more familiar with Haskell, and more and more have I begun to realize its true potential. 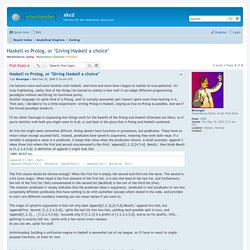 It's truly frightening, really. One of the things I've started to realize is how well it can adapt different programming paradigms without sacrificing its functional purity.Another language I'm quite fond of is Prolog, and I'm actually somewhat sad I haven't spent more time hacking in it.That said, I decided to try a little experiment: writing Prolog in Haskell, staying as true to Prolog as possible, and see if the forced paradigm breaks it.

I'll be rather thorough in explaining how things work for the benefit of the Prolog and Haskell illiterates out there, so if you're familiar with both you might want to tl;dr, or just bask in the glory that is Prolog and Haskell combined. At first this might seem somewhat difficult. Prolog doesn't have functions or procedures, but predicates. Code: Select all. SWI-Prolog FAQ. Using Difference Lists. I posted my enthusiasm about difference lists for Haskell earlier this month, but then became sidetracked by combinators and reading lists, so, let's get back on track. 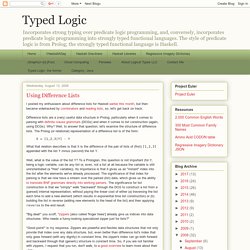 Difference lists are a (very) useful data structure in Prolog, particularly when it comes to parsing with definite clause grammars (DCGs) and when it comes to list construction (again, using DCGs). Why? Well, to answer that question, let's examine the structure of difference lists. Story To Tell - List Zippers in Haskell and Prolog. Earlier today I thought I’d solidify my understanding of zippers, at least with lists. 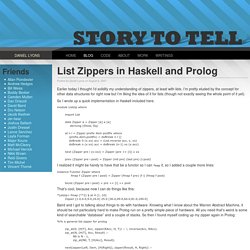 I’m pretty eluded by the concept for other data structures for right now but I’m liking the idea of it for lists (though not exactly seeing the whole point of it yet). » Zipper lists in Prolog Logtalking. April 30, 2013 I’m currently looking into zipper data structures. 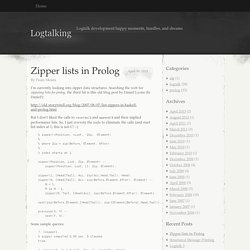 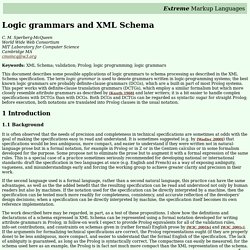 The term logic grammar is used to denote grammars written in logic-programming systems; the best known logic grammars are probably definite-clause grammars (DCGs), which are a built-in part of most Prolog systems. This paper works with definite-clause translation grammars (DCTGs), which employ a similar formalism but which more closely resemble attribute grammars as described by [Knuth 1968] and later writers; it is a bit easier to handle complex specifications with DCTGs than with DCGs. Both DCGs and DCTGs can be regarded as syntactic sugar for straight Prolog; before execution, both notations are translated into Prolog clauses in the usual notation. 1 Introduction 1.1 Background The work described here may be regarded, in part, as a test of these propositions. 2.4 A simple schema.

MiniKanren.org. One of the most commonly asked questions about miniKanren is how miniKanren differs from Prolog. 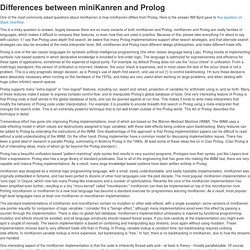 Here is the answer Will Byrd gave to this question on Stack Overflow. This is a tricky question to answer, largely because there are so many variants of both miniKanren and Prolog. miniKanren and Prolog are really families of languages, which makes it difficult to compare their features, or even how they are used in practice. MiniKanren.org. Using Difference Lists. » Zipper lists in Prolog Logtalking. Definite Clause Grammars (DCGs) Definite Clause Grammars (DCGs) are convenient ways to represent grammatical relationships for various parsing applications. 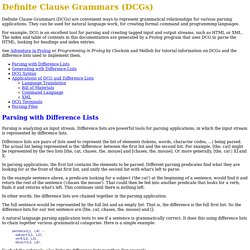 They can be used for natural language work, for creating formal command and programming languages. For example, DCG is an excellent tool for parsing and creating tagged input and output streams, such as HTML or XML. The index and table of contents in this documentation are generated by a Prolog program that uses DCG to parse the HTML, looking for headings and index entries. Using Definite Clause Grammars in SWI-Prolog. Home By Anne Ogborn Thanks to Markus Triska. 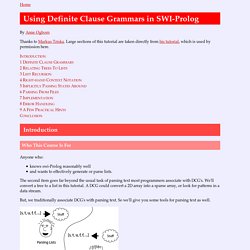 XML.com. April 25, 2001 Introduction: SW is AI Many Semantic Web advocates have gone out of their way to disassociate their visions and projects from the Artificial Intelligence moniker. 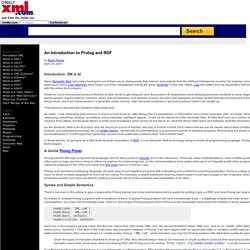 No surprise, since the AI label has been the kiss of, if not death, at least scorn, since Lisp machines were frozen out of the marketplace during the great "AI winter" of the mid-1980s. Lisp still suffers from its association with the AI label, though it does well by being connected with the actual technologies. However, it is a curious phenomenon that the AI label tends to get dropped once the problem AI researchers were studying becomes tractable to some degree and yields practical systems. That seems to describe the Semantic Web pretty well. An aside -- one interesting phenomenon is that a lot of AI ends up, after fleeing the CS department, in Information and Library Sciences.

So the Semantic Web is an AI project, and we should be proud of that fact. RDF Applications with Prolog. Published on XML.com this if you're having trouble printing code examples RDF Applications with PrologBy Bijan Parsia July 25, 2001. SWI-Prolog. Is an atom, list of character codes, or a Prolog string. provides the arguments required by the format specification. If only one argument is required and this single argument is not a list, the argument need not be put in a list. Otherwise the arguments are put in a list. Special sequences start with the tilde (~), followed by an optional numeric argument, optionally followed by a colon modifier (:), 116The colon modifiers is a SWI-Prolog extension, proposed by Richard O'Keefe. followed by a character describing the action to be undertaken.

A numeric argument is either a sequence of digits, representing a positive decimal number, a sequence `<>, representing the character code value of the character (only useful for ~t) or a asterisk (*), in which case the numeric argument is taken from the next argument of the argument list, which should be a positive integer. E.g., the following three examples all pass 46 (.) to ~t: ? ? LtU Classic Archives. Here's an online tutorial that has some stuff on DCG's and Building Parse Trees for an expression grammar, since the basic DCG will only tell you whether the list of strings satisfies the grammar. DCG's are also the natural language parsing formalism with the longest unbroken history. The tradition starts with Schieber and Pereira's classic Prolog and Natural Language Analysis that culminates in a English question answering program in DCG: "Talk".

(code available at CMU AI Repository) Prolog Programming: a do-it-yourself course for beginners. This is a course that I will teach at the 16th European Summer School in Logic, Language and Information which is going to take place in Nancy, France in August 2004. It will be a hands-on programming course for students of linguistics who don't have any prior experience in programming. Its aim is to give linguists an impression of what it means to program and to show them how straightforward it is to do some interesting things (like writing parsers for small grammars). According to the courses's aim, its focus will be on material that leads the students to practical programming. In the first three lectures I will cover the basics of Prolog (knowledge bases and queries, matching and proof search, lists). The last two lectures will be devoted to Definite Clause Grammars (DCGs). Programming is something which cannot be learned without actually doing it.

Prolog - Count the number of leaves in a tree. Grammar - Prolog DCG illustration please. Problem - writing XML with Prolog. Permalink Raw Message Report Post by Herick.snakegenerate(ARQ) :-tell(ARQ),write(brother(ana,Y),write('write(' '), nl,write(' '), nl,write(''), nl,flush,tell(user). Write: Prolog 3/4: XML Parsing « Virtuous Programmer. Coursenotes. Getting Started. This section provides a tutorial introduction to JPL through its JPL 2.x Java API overview, the interface most programmers are likely to use. The source code described here can be found in the examples directory of the JPL distribution. Feel free to consult the source files and run the demonstration program as you read this section. Verifying the installation To confirm that JPL and SWI-Prolog are basically able to work together, open a console window and go into this directory: jpl/examples/ read the README.txt file, and run the various examples which it describes.

Each Java example will run as an application (i.e. each has a main() method), exercises SWI-Prolog, and writes something to System.out or System.err. Prolog Tutorial. RDF Applications with Prolog. Prolog Development Tools - ProDT - Eclipse IDE for Prolog. The Prolog Development Tool - A Prolog IDE for Eclipse [SE-Wiki] The PDT is a Prolog IDE provided as a plug-in for the Eclipse Platform. Algorithms for Computational Linguistics. Programming in XPCE/Prolog: Section 11.4. The table-of-content library defines a window displaying a tree in an explorer-like style. This library is programmed by refining its base-class toc_window.

We will introduce this library using an example exploring the filesystem. A screendump of this application is in figure 21. Programming is achieved by subclassing toc_window and in some cases the support classes toc_folder and toc_file, representing expandable and leaf-nodes. Each node is assigned an identifier, a unique reference to the node. Below we describe the important methods of this package. Yet More XML: with Prolog. [ Jocelyn Ireson-Paine's Home Page | Publications | Dobbs Code Talk Index | Dobbs Blog Version ] I just saw Mark Nelson's More on XML with his account of how difficult Visual C++ and MSXML make it to extract a node not all that far down from the root of an XML tree. Help: I want the whole answer. Anniepoo/amziexpertsystemsinprolog. Prolog Programming. Prolog Programming. Prolog Programming. Natural Language Processing Techniques in Prolog. Natural Language Processing Techniques in Prolog Patrick Blackburn and Kristina Striegnitz.