This Will Set You Free 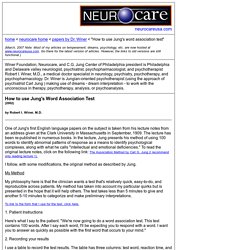 Oscillating Matter - Ethics Wiki. All molecules in existence are energies that vibrates/oscillates in the space time continuum. 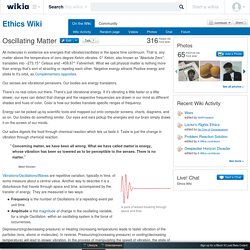 That is, any matter above the temperature of zero degree Kelvin vibrates. 0° Kelvin, also known as "Absolute Zero", translates into −273.15° Celsius and −459.67° Fahrenheit. What we call physical matter is nothing more than energy that’s sort of atracting or repeling each other. Negative energy attracts Positive energy and sticks to it's orbit, as Complementary opposites. Our senses are vibrational perceivers. Our bodies are energy translators. Qigong. Qigong, qi gong, chi kung, or chi gung (simplified Chinese: 气功; traditional Chinese: 氣功; pinyin: qìgōng; Wade–Giles: chi gong; literally: "Life Energy Cultivation") is type of spiritual practice intended to "align" body, breath, and mind for health, meditation, and martial arts training. 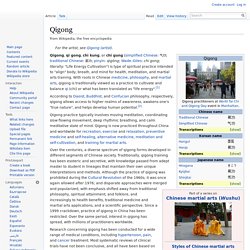 Over the centuries, a diverse spectrum of qigong forms developed in different segments of Chinese society. Etymology[edit] Mirror neuron. A mirror neuron is a neuron that fires both when an animal acts and when the animal observes the same action performed by another.[1][2][3] Thus, the neuron "mirrors" the behavior of the other, as though the observer were itself acting. 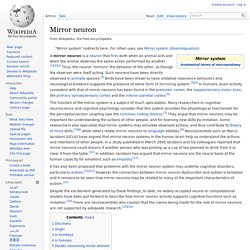 Such neurons have been directly observed in primate species.[4] Birds have been shown to have imitative resonance behaviors and neurological evidence suggests the presence of some form of mirroring system.[4][5] In humans, brain activity consistent with that of mirror neurons has been found in the premotor cortex, the supplementary motor area, the primary somatosensory cortex and the inferior parietal cortex.[6] The function of the mirror system is a subject of much speculation. Discovery[edit] How to Train a Brain - Crash Course Psychology #11. How We Make Memories - Crash Course Psychology #13. Cognition: How Your Mind Can Amaze and Betray You - Crash Course Psychology #15. The Higgs Field, explained - Don Lincoln.

Tang Yau Hoong - artist/ illustrator/ graphic designer. Feeling All the Feels: Crash Course Psychology #25. The Power of Motivation: Crash Course Psychology #17. The mysterious DNA. Chapter 9 The mysterious DNA The DNA double helix as the template of all life forms has been around in science for some fifty years now since its discovery by Crick and Watson. 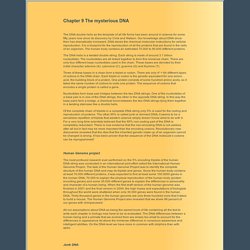 Our knowledge about DNA since then has dramatically increased. DNA stores the chemical molecular instructions for cellular reproduction. 8 traits of successful people - Richard St. John. Quantum theory: it's unreal. What happened to antimatter? - Rolf Landua. Why You Are Still Alive - The Immune System Explained. Terence Mckenna - Tao and the Art of James Joyce. How Evolution works. Noncoding DNA. Initially, a large proportion of noncoding DNA had no known biological function and was therefore sometimes referred to as "junk DNA", particularly in the lay press. However, it has been known for decades[citation needed] that many noncoding sequences are functional. These include genes for functional RNA molecules (see above) and sequences such as origins of replication, centromeres, and telomeres.

22nd Teaching – Nov 2014 « The Path To Oneness. As written, the last article was channeled by The Golden Ones and it was their last spiritual teaching, ending a compilation of twenty-one teachings in all. 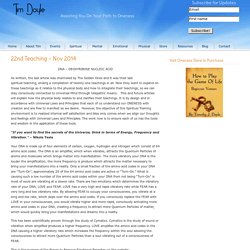 Now they want to expand on these teachings as it relates to the physical body and how to integrate their teachings, so we can stay consciously connected to Universal Mind through telepathic means. This and future articles will explain how the physical body relates to and clarifies their teachings. It is by design and in accordance with Universal Laws and Principles that each of us understand our ONENESS with creation and are free to manifest as we desire. However, the objective of this Spiritual Training environment is to realized internal self satisfaction and bliss only comes when we align our thoughts and feelings with Universal Laws and Principles. Ancient Knowledge ( full video HD )