7.2 Structure and function of the brain

Brain Function, Anatomy & Diagram. Much of the brain's physiological task involves receiving information from the rest of the body, interpreting that information, and then guiding the body's response to it. 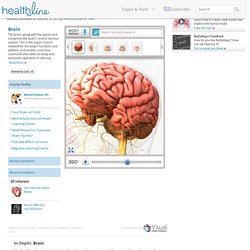 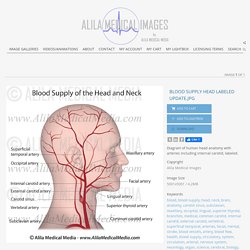 Copyright Alila Medical Images Image Size 5001x5001 / 4.2MB Keywords. Blood Supply to the Brain - Animation and Narration by Cal Shipley, M.D. Blood Supply to the Brain (3D Anatomy Tutorial) Circulatory System and Disease. Circulatory System and Disease. What is the Blood-Brain Barrier? Blood Brain Barrier. What is the Blood-Brain Barrier? Where Does The Human Brain Get Its Energy? What’s the source of energy that powers the human brain? 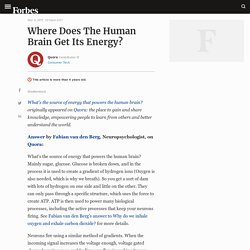 Originally appeared on Quora: the place to gain and share knowledge, empowering people to learn from others and better understand the world. Answer by Fabian van den Berg, Neuropsychologist, on Quora: How sugar affects the brain - Nicole Avena. Sheep Brain Dissection. Sheep brain dissection video. Improving Memory. In many ways, our memories shape who we are. 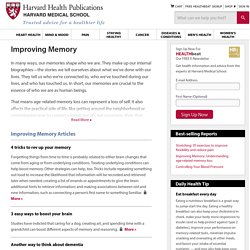 They make up our internal biographies—the stories we tell ourselves about what we've done with our lives. They tell us who we're connected to, who we've touched during our lives, and who has touched us. In short, our memories are crucial to the essence of who we are as human beings. That means age-related memory loss can represent a loss of self. It also affects the practical side of life, like getting around the neighborhood or remembering how to contact a loved one. What causes some people to lose their memory while others stay sharp as a tack? What percentage of your brain do you use? - Richard E. Cytowic. Brain Tricks - This Is How Your Brain Works.

Are Boys Smarter Than Girls? What Makes Our Brains Special? The human brain is unique: Our remarkable cognitive capacity has allowed us to invent the wheel, build the pyramids and land on the moon. 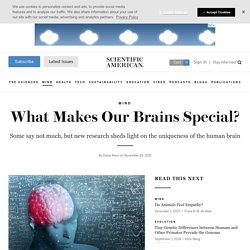 In fact, scientists sometimes refer to the human brain as the “crowning achievement of evolution.” But what, exactly, makes our brains so special? Some leading arguments have been that our brains have more neurons and expend more energy than would be expected for our size, and that our cerebral cortex, which is responsible for higher cognition, is disproportionately large—accounting for over 80 percent of our total brain mass. Suzana Herculano-Houzel, a neuroscientist at the Institute of Biomedical Science in Rio de Janeiro, debunked these well-established beliefs in recent years when she discovered a novel way of counting neurons—dissolving brains into a homogenous mixture, or “brain soup.”

Other researchers have found that traits once believed to belong solely to humans also exist in other members of the animal kingdom. Athletes are better at tuning out background brain noise. People who play sports appear to have an enhanced ability to process sounds from their environment, according to new research. 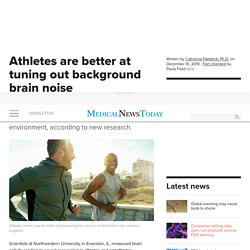 Share on Pinterest Scientists at Northwestern University in Evanston, IL, measured brain activity relating to sound processing in athletes and nonathletes. They found that due to a stronger ability to lessen the background electrical noise in their brains, the athletes were better at processing signals from external sounds. The team reports the findings in a recent paper in the journal Sports Health: A Multidisciplinary Approach.

"No one would argue against the fact that sports lead to better physical fitness, but we don't always think of brain fitness and sports," says senior study author Nina Kraus, a professor of communication sciences and neurobiology at Northwestern University and director of its Auditory Neuroscience Laboratory. Brain Myth - Human Brain is Biggest. While scientists can't agree on a single definition of “intelligence,” they generally concur that humans are the most intelligent living creature on Earth. 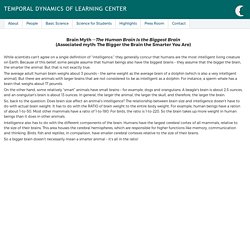 Because of this belief, some people assume that human beings also have the biggest brains – they assume that the bigger the brain, the smarter the animal. But that is not exactly true. The average adult human brain weighs about 3 pounds – the same weight as the average brain of a dolphin (which is also a very intelligent animal). But there are animals with larger brains that are not considered to be as intelligent as a dolphin.

For instance, a sperm whale has a brain that weighs about 17 pounds. On the other hand, some relatively “smart” animals have small brains – for example, dogs and orangutans: A beagle's brain is about 2.5 ounces, and an orangutan's brain is about 13 ounces. Animal brains v human brains – let the Battle of the Brains commence! Humans are widely assumed to be the most intelligent species on Earth due to our intricate civilisations and innovative behaviours. 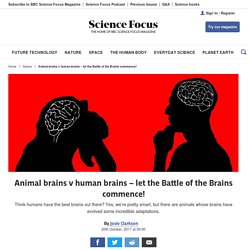 But, have you ever considered that our brains have features that are inferior to animal brains? We’ve pitted humans against the rest of the animal kingdom in various categories to reveal whose has the best cerebellum, the brightest cerebrum, and the greatest grey matter in the ultimate Battle of the Brains. Smell Unsurprisingly, humans won’t receive any awards for our sense of smell. Dyslexia and the Brain. Stratford Foundation, Inc. d/b/a Commonwealth Learning Center, Professional Training Institute, & Commonwealth Learning Online Institute Website Privacy Statement and Terms of Use Disclaimer Revised: 11/15/2011 ScopeThe Stratford Foundation Inc (Stratford) privacy statement applies to Stratford’s primary domain names commlearn.com, commlearntraining.com, commlearnonline.com and all its sub domains. 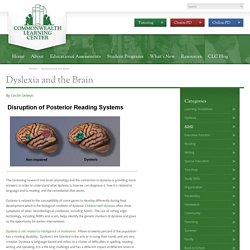