Effortless English Archives: What the C-test is. By Lucy Katona and Zoltan Dornyei from: Forum English Teaching The C-test is an integrative testing instrument that measures overall language competence, very much like the cloze test. 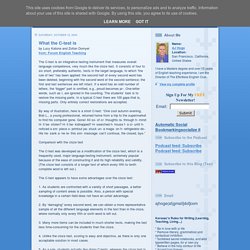 It consists of four to six short, preferably authentic, texts in the target language, to which “the rule of two” has been applied: the second half of every second word has been deleted, beginning with the second word of the second sentence; the first and last sentences are left intact. If a word has an odd number of letters, the “bigger” part is omitted, e.g., proud becomes pr-. UNSW Teaching Staff Gateway Using Assessment Rubrics 2016 12 02. Using Assessment Rubrics. Video about iUNSW Rubrik Application [See Transcript of video] iRubrik This video shows how the Mechanical Engineering project (ENGG1000, T1 2011) used the iUNSW Rubrik iPad marking app to mark the final project competition, making the process much quicker and more efficient. iUNSW Rubrik iOS App used in ENGG1000 T1 2011. 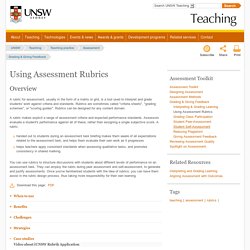 Quia - Class Page - hkeller. 10 Useful Web Tools for Creating Online Quizzes and Polls. February, 2014 Following the visual I posted here a couple of weeks ago featuring the differences between formative and summative assessments, somebody shared with the link to this Listly list that comprises dozens of interesting web tools to create online assessments. 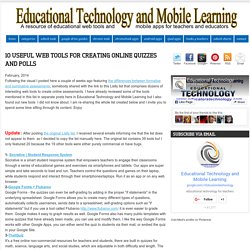 I have already reviewed some of the tools mentioned in this list in separate posts here in Educational Technology and Mobile Learning but I also found out new tools I did not know about. I am re-sharing the whole list created below and I invite you to spend some time sifting through its content. Enjoy. Online Testing Free Quiz Maker Create the Best web-based quizzes ClassMarker. 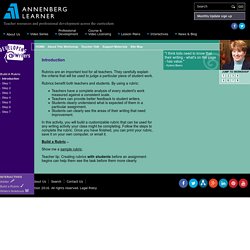 They carefully explain the criteria that will be used to judge a particular piece of student work. Rubrics benefit both teachers and students. By using a rubric: Teachers have a complete analysis of every student's work measured against a consistent scale. Teachers can provide better feedback to student writers. Build rubric: RCampus. Recipes4Success. International language standards. Ascilite2016 vitartas full. 10 1 Elimat. WriteLab. Free Online Grammar Check and Proofreader. 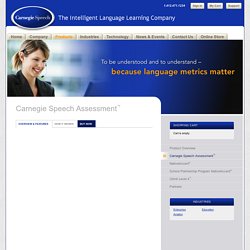 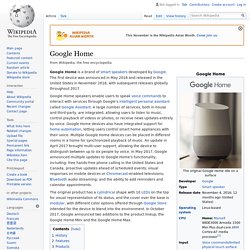 The product stands as a rival to Amazon Echo in the smart speaker industry. It was released on November 4, 2016 for US$129. History[edit] In March 2016, reports were published about Google developing a wireless speaker to compete against the Amazon Echo.[1] Google Home was announced at Google I/O in May 2016,[2] where it was also announced that Home would run Google Assistant (a conversational evolution of Google Now intended to be integrated in other products announced at I/O).[3] On June 2016, it was confirmed that Home would use an optimized version of the Chromecast's software, while the hardware would support home automation software, allowing the user to control compatible products.[4][5] The product was released in the United States on November 4, 2016. 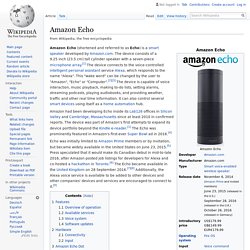 The device consists of a 9.25 inch (23.5 cm) tall cylinder speaker with a seven-piece microphone array.[1] The device connects to the voice-controlled intelligent personal assistant service Alexa, which responds to the name "Alexa". This "wake word" can be changed by the user to "Amazon", "Echo" or "Computer".[2][3] The device is capable of voice interaction, music playback, making to-do lists, setting alarms, streaming podcasts, playing audiobooks, and providing weather, traffic and other real time information.

It can also control several smart devices using itself as a home automation hub. Amazon had been developing Echo inside its Lab126 offices in Silicon Valley and Cambridge, Massachusetts since at least 2010 in confirmed reports. Features[edit] Dragon Dictation App – Text to Speech App  Dictation - Online Speech Recognition. Cortana (software) - Wikipedia. Cortana can set reminders, recognize natural voice without the requirement for keyboard input, and answer questions using information from the Bing search engine. 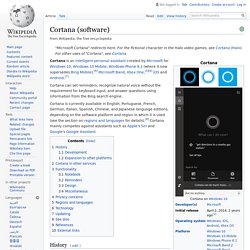 In January 2015, Microsoft announced the availability of Cortana for Windows 10 desktops and mobile devices as part of merging Windows Phone into the operating system at large. The Chinese version of Cortana, Xiao Na This table identifies the localized version of Cortana currently available. Except where indicated, this applies to both Windows Mobile and Windows 10 versions of the assistant. Siri - Wikipedia. Teachers TV: E-assessment - Where Next? Cloze test - Wikipedia. A cloze test (also cloze deletion test) is an exercise, test, or assessment consisting of a portion of text with certain words removed (cloze text), where the participant is asked to replace the missing words. 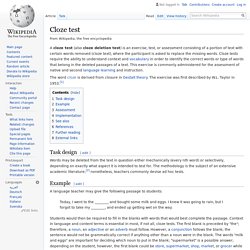 Cloze tests require the ability to understand context and vocabulary in order to identify the correct words or type of words that belong in the deleted passages of a text. This exercise is commonly administered for the assessment of native and second language learning and instruction. The word cloze is derived from closure in Gestalt theory.