Children's Storybooks Online - Stories for Kids of All Ages. _@school. Top 10 Skills Every Great Leader Needs to Succeed. Leadership Skills. The ability to lead effectively is based on a number of key skills. 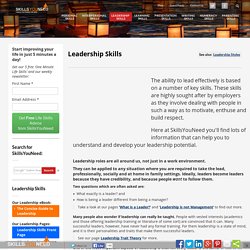 These skills are highly sought after by employers as they involve dealing with people in such a way as to motivate, enthuse and build respect. Here at SkillsYouNeed you'll find lots of information that can help you to understand and develop your leadership potential. Leadership roles are all around us, not just in a work environment. Free Activities for Teachers. Activities for Kids' Early Learning. Educational Fun Activities for Kids - Jumpstart. Education in Emergencies. Au.pinterest. Child-Friendly Spaces on Flipboard. The Right to Education. Education is a fundamental human right and essential for the exercise of all other human rights. 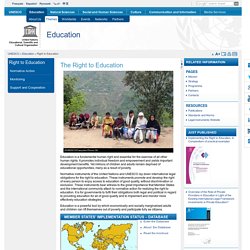 It promotes individual freedom and empowerment and yields important development benefits. Yet millions of children and adults remain deprived of educational opportunities, many as a result of poverty. Normative instruments of the United Nations and UNESCO lay down international legal obligations for the right to education. These instruments promote and develop the right of every person to enjoy access to education of good quality, without discrimination or exclusion. These instruments bear witness to the great importance that Member States and the international community attach to normative action for realizing the right to education.

Improving Education in Developing Countries. – UN Food & Agriculture Organization No country has ever achieved rapid and continuous economic growth without at least a 40% literacy rate. Worldwide, 124 million children and adolescents are not in school – and the number is rising. Of these 1 in 11 (59 million) are primary school aged (6-11), and 30 million are in sub-Saharan Africa. Girls are the first to be excluded: 16.7 million girls in sub-Saharan African are not in school, and over half of them will not get a single year of education. A single year of primary school increases a boy’s future earning potential by five to 15% and a girl’s even more. I grew up in the world's biggest refugee camp – what happens when it closes? In a dusty expanse of desert in eastern Kenya sits the world’s largest refugee settlement, the place I call home. 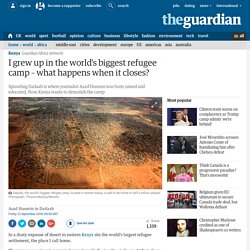 The camp was set up in 1991 to house Somalis fleeing the civil war. At first, there were three settlements: Ifo, Dagahaley and Hagadera. Ifo II and Kambioos were later added. They are all generally called Dadaab, named after the nearby town 50 miles (80km) from the Somali border. Half a million people are estimated to live here. Why I call Dadaab home - Sahan Journal. An aerial view of aaaaab refugee camp. 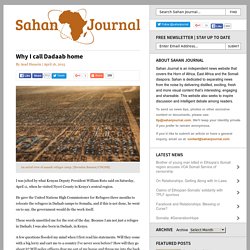 [Brendan Bannon/UNCHR] I was jolted by what Kenyan Deputy President William Ruto said on Saturday, April 11, when he visited Nyeri County in Kenya’s central region. He gave the United Nations High Commissioner for Refugees three months to relocate the refugees in Dadaab camps to Somalia, and if this is not done, he went on to say, the government would do the work itself. These words unsettled me for the rest of the day. Child rights information for children - UNICEF Australia. “Article 1: If you are under18 years of age, you are achild, and you have rights.” - Convention on the Rights of the Child, 1989 All people have human rights. 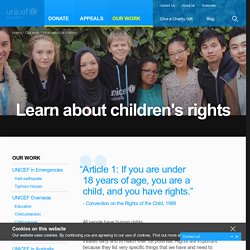 Top 15 Reasons Why Education is Extremely Important. You may be knowing your A’s and B’s and C’s, but are you educated or just literate? 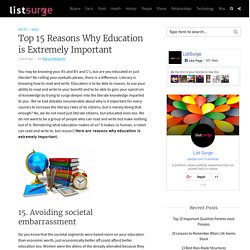 No rolling your eyeballs please, there is a difference. Literacy is knowing how to read and write. Education is to be able to reason, to use your ability to read and write to your benefit and to be able to gain your spectrum of knowledge by trying to surge deeper into the literate knowledge imparted to you. We’ve had debates innumerable about why is it important for every country to increase the literacy rates of its citizens, but is merely doing that enough? No, we do not need just literate citizens, but educated ones too. 15. Do you know that the societal segments were based more on your education than economic worth, just economically better off could afford better education too. 14. Are you aware that most superstitions we follow still were a brainchild of the educated and had a scientific reason to support it. 13.

Hands-on Children's Activities Related to Life in Refugee Camps - United Church of Christ. The materials available from various denominations, and religious organizations, etc., are valuable resources to use in presenting a Biblical/Christian focus to how we might better follow the teachings of God, through His Son Jesus Christ. 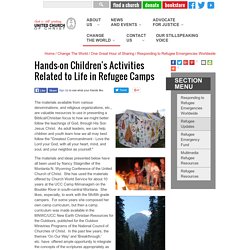 As adult leaders, we can help children and youth learn how we all may best follow the "Greatest Commandment - Love the Lord your God, with all your heart, mind, and soul, and your neighbor as yourself. " The materials and ideas presented below have all been used by Nancy Staigmiller of the Montanta N. Wyoming Conference of the United Church of Christ. She has used the materials offered by Church World Service for about 10 years at the UCC Camp Mimanagish on the Boulder River in south-central Montana. Refugee awareness - Teaching ideas. Karen Women Organisation. The arts in refugee camps: ten good reasons.

Clearly, artistic activity is neither a solution for every problem, nor can it provide quick fixes. 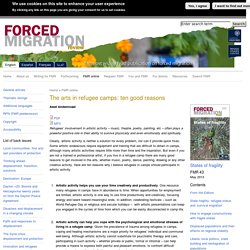 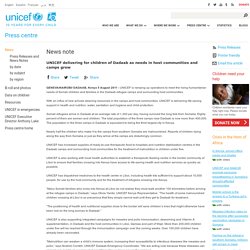 With an influx of new arrivals straining resources in the camps and host communities, UNICEF is delivering life-saving support in health and nutrition, water, sanitation and hygiene and child protection. Somali refugees arrive in Dadaab at an average rate of 1,300 per day, having survived the long trek from Somalia. Eighty percent of them are women and children. The total population of the three camps near Dadaab is now more than 400,000. Attention Broadcasters: Broadcast quality video material available at: The classroom offers a 13-year-old Somali refugee sanctuary from the rigours of life in Kenya's Dadaab camp. By Thomas Nybo DADAAB, Kenya, 27 December 2012 – Hawa Osman, 13, never attended school until she arrived at what’s described as the world's largest refugee camp, here in northeast Kenya. 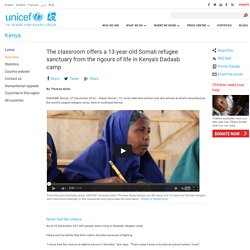 Never had the chance As of 16 December, 431,300 people were living in Dadaab refugee camp. Hawa and her family fled their native Somalia because of fighting. “I never had the chance to attend school in Somalia,” she says. Amidst regional drought, malnutrition imperils thousands of refugee children in Dadaab, Kenya. By Kun Li DADAAB, Kenya, 15 July 2011 – Along with hundreds of other recent arrivals from neighbouring Somalia, five-day-old Isha, her five siblings and their parents wait in a queue at the sprawling Dadaab refugee settlement here in north-eastern Kenya. “My wife was nine months pregnant when we started the journey,” says Isha’s father, Noor Miyo. “On the way, we suffered. We had to pass through Al Shabab checkpoints, and they took whatever we had.” Adds the baby’s mother, Nurto Manoor: “I went into labour on the first night after we arrived here. Overcrowded conditions. Educate a Child.

What are refugees? At times, it becomes necessary for individuals, families, and some times whole communities to flee a situation that has become dangerous to their health, wellbeing, and even their lives. Often they are fleeing wars or other armed conflicts, or religious, racial, or political persecution. Inside Dadaab - the world's largest refugee camp.

Life Inside The World's Largest Refugee Camp (2011) 28407318 Child Friendly Schools Manual. The Challenge of Education. Education Youth UNHCR June 2015. The Benefits of Education. Lost in Dadaab: The World's Largest Refugee Camp is Shutting Down. Welcome to Dadaab. #DadaabShutdown: History of the refugee camp - CCTV Africa - Strengthening news coverage in Africa. More than 20 years later, the Kenyan government announced its intention to close what is referred to as the world’s biggest refugee camp, Dadaab. The Kenyan government has cited “reasons of pressing national security” for the decision. Dadaab Refugee Camp is located approximately in the Kenya’s north-eastern county of Garissa, 100 kilometres from the Kenya-Somalia border. The camp hosts people that have fled various conflicts in the larger Eastern Africa region.

UNHCR, which manages the Dadaab complex, set up the first camps there between October 1991 and June 1992. This followed a civil war in Somalia that in 1991 had culminated in the fall of Mogadishu and overthrow of the central government. The Refugee Project. Refugees in the Horn of Africa: Somali Displacement Crisis - - Dadaab.

Related:  Read and Listen Along and Aloud Resources   -  Migration stories   -  REFUGEES   -  Children's Storybooks Online - Stories for Kids of All Ages   -  The Challenge of Education   -  The Refugee Project   -  Education   -  Enterprise