English Fairy Tales. WHO says that English folk have no fairy tales of their own? 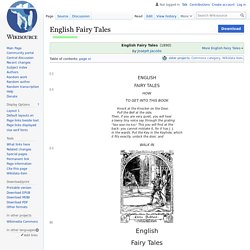 The present volume contains only a selection out of some 140, of which I have found traces in this country. It is probable that many more exist. A quarter of the tales in this volume have been collected during the last ten years or so, and some of them have not been hitherto published. Up to 1870, it was said equally of France and of Italy, that they possessed no folk-tales. Yet, within fifteen years from that date, over 1000 tales had been collected in each country.

A word or two as to our title seems necessary. The first adjective of our title also needs a similar extension of its meaning. I have also rescued and re-told a few Fairy Tales that only exist nowadays in the form of ballads. In the majority of instances I have had largely to re-write[2] these Fairy Tales, especially those in dialect, including the Lowland Scotch. In a few instances I have introduced or changed an incident. Prefatory Note to Third Edition. The Giving Tree by Shel Silverstein. Once there was a tree.... and she loved a little boy. And everyday the boy would come and he would gather her leaves and make them into crowns and play king of the forest. He would climb up her trunk and swing from her branches and eat apples. And they would play hide-and-go-seek. Fire and Ice by Robert Frost. The Tell-Tale Heart by Edgar Allan Poe - Poestories.com. By Edgar Allan Poe(published 1850) TRUE! 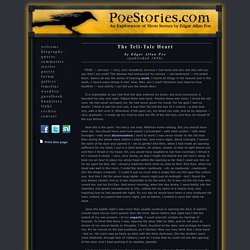 -- nervous -- very, very dreadfully nervous I had been and am; but why will you say that I am mad? The disease had sharpened my senses -- not destroyed -- not dulled them. Above all was the sense of hearing acute. Frost’s Early Poems: “Stopping by Woods on a Snowy Evening” Complete Text Whose woods these are I think I know. 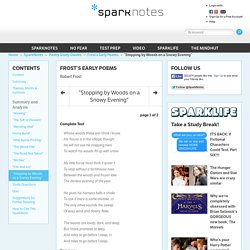 His house is in the village, though; He will not see me stopping here To watch his woods fill up with snow.My little horse must think it queer 5 To stop without a farmhouse near Between the woods and frozen lake The darkest evening of the year.He gives his harness bells a shake To ask if there is some mistake. 10 The only other sounds the sweep Of easy wind and downy flake.The woods are lovely, dark, and deep, But I have promises to keep, And miles to go before I sleep, 15 And miles to go before I sleep. Summary On the surface, this poem is simplicity itself.

The speaker is stopping by some woods on a snowy evening. Form The poem consists of four (almost) identically constructed stanzas. Robert Burns Poem, 'A Cotter's Saturday night.' A "Cotter" in Burns's time was a poor peasant who was given the use of a Cot or Cottage by the property owner in exchange for labour as opposed to paying rent. 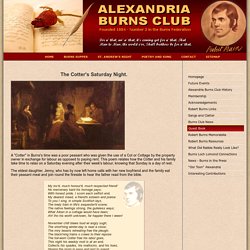 This poem relates how the Cotter and his family take time to relax on a Saturday evening after their week's labour, knowing that Sunday is a day of rest. Poetry Everywhere. When asked to reveal the hidden meaning of his poems, Robert Frost's response was "If I wanted you to know I'd had told you in the poem. 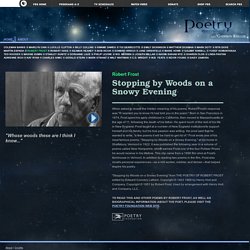 " Born in San Francisco in 1874, Frost spent his early childhood in California, then moved to Massachusetts at the age of 11, following the death of his father. He spent much of the rest of his life in New England. Frost taught at a number of New England institutions to support himself and his family; but his true passion was writing. He once said that he wanted to write, "a few poems it will be hard to get rid of. " JazzAge Culture: Part I. Nichols Home Page // Jazz Age Part II // Jazz Age Writers The Flapper Era Flapper Girl (1920s photo) 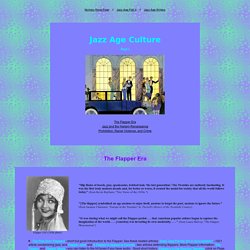 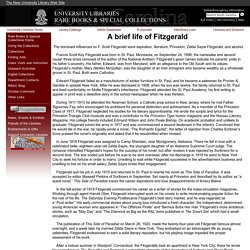 Scott Fitzgerald were aspiration, literature, Princeton, Zelda Sayre Fitzgerald, and alcohol. Francis Scott Key Fitzgerald was born in St. Paul, Minnesota, on September 24, 1896, the namesake and second cousin three times removed of the author of the National Anthem. Fitzgerald’s given names indicate his parents’ pride in his father’s ancestry. Timeless Hemingway. Picturing Hemingway: A Writer in His Time. Thirteen Ways of Looking at a Blackbird. MAPS. In stock late June for fall 2014 adoption. 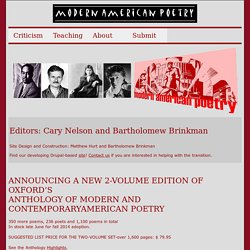 The Modern American Poetry Site is a comprehensive learning environment and scholarly forum for the study of modern and contemporary American poetry. Started as a multimedia companion to the Anthology of Modern American Poetry (Oxford University Press, 2000), MAPS has grown over the past decade to more than 30,000 pages of biographies, critical essays, syllabi and images relating to 161 poets. Kate Chopin: The Awakening, The Storm, stories, biography. The Angel in the House. The Angel in the House is a narrative poem by Coventry Patmore, first published in 1854 and expanded until 1862. 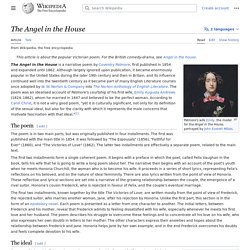 Although largely ignored upon publication, it became enormously popular during the later 19th century and its influence continued well into the twentieth. Daisy Miller, by Henry James, 1878. We have moved! Mark Twain in His Times Homepage. Mark Twain Project.