Fire and Ice by Robert Frost 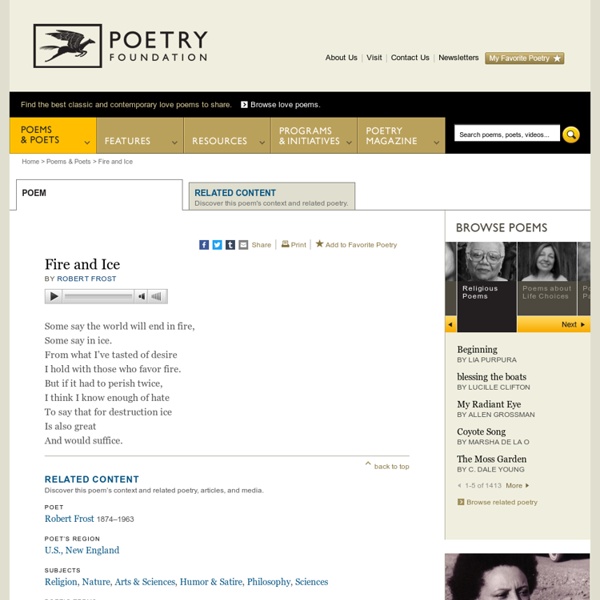 The Giving Tree by Shel Silverstein Once there was a tree.... and she loved a little boy. And everyday the boy would come and he would gather her leaves and make them into crowns and play king of the forest. He would climb up her trunk and swing from her branches and eat apples. And they would play hide-and-go-seek. And so the boy cut off her branches and carried them away to build his house. And after a long time the boy came back again.

Poem Starters and Creative Writing Ideas Enter your e-mail to get the e-book for FREE. We'll also keep you informed about interesting website news. "I have searched the web and used different worksheets, but none have come close to your worksheets and descriptions of (what to do and what not to do). Both courses I have taken have with Creative Writing Now have been amazing. Each time I have learned something new. "As usual - I already love the course on Irresistible Fiction, rewriting a lot and improving greatly even after the first lesson. “Essentials of Fiction proved that I could indeed write and I wrote every day, much to my boyfriend's dismay (waa sniff).” - Jill Gardner "I am loving the course and the peer interaction on the blog is fantastic!!!" "I'm enjoying the weekly email course, Essentials of Poetry Writing. "Thank you for all the material in this course. "I was pleasantly surprised at the quality of the lessons and feel they were very helpful in introducing new ideas and perspectives to my writing.

The Tell-Tale Heart by Edgar Allan Poe - Poestories.com by Edgar Allan Poe(published 1850) TRUE! -- nervous -- very, very dreadfully nervous I had been and am; but why will you say that I am mad? The disease had sharpened my senses -- not destroyed -- not dulled them. Above all was the sense of hearing acute. It is impossible to say how first the idea entered my brain; but once conceived, it haunted me day and night. Now this is the point. Upon the eighth night I was more than usually cautious in opening the door. I had my head in, and was about to open the lantern, when my thumb slipped upon the tin fastening, and the old man sprang up in bed, crying out --"Who's there?" I kept quite still and said nothing. Presently I heard a slight groan, and I knew it was the groan of mortal terror. When I had waited a long time, very patiently, without hearing him lie down, I resolved to open a little --a very, very little crevice in the lantern. It was open --wide, wide open --and I grew furious as I gazed upon it. I smiled, --for what had I to fear?

Poetry Primer Poetry Primer: Looking at various types of poems Click on a small image to see the larger version of that image Additional Haiku Samples Poems: Haiku, Quatrain, Cinquain Back to Documents Exercises for Story Writers English 50 – Intro to Creative Writing: Exercises for Story Writers Basic Theory: What is a short story? As soon as someone delivers a definition, some good writer will write a story that proves the theory wrong. Short stories have a narrator; that is, someone tells the story; have at least one character in them; have some action occur (or perhaps fails to occur); take place somewhere; that is, there is a setting for the action; and someone either learns something or fails to learn something (theme).With these five characteristics in mind, we can create an almost endless supply of exercises to help sharpen our techniques of story telling. Narrative Voice Twenty or so years ago, voice was the "rite of passage" into a successful writing career. Nevertheless, a narrative voice that sounds like it could be anyone's voice or is bland and boring, or riddled with pointless clichés will fail to capture and hold the reader's attention. If you've written a story in third person, try it in first.

English Fairy Tales WHO says that English folk have no fairy tales of their own? The present volume contains only a selection out of some 140, of which I have found traces in this country. It is probable that many more exist. A quarter of the tales in this volume have been collected during the last ten years or so, and some of them have not been hitherto published. A word or two as to our title seems necessary. The first adjective of our title also needs a similar extension of its meaning. I have also rescued and re-told a few Fairy Tales that only exist nowadays in the form of ballads. In the majority of instances I have had largely to re-write[2] these Fairy Tales, especially those in dialect, including the Lowland Scotch. In a few instances I have introduced or changed an incident. Finally, I have to thank those by whose kindness in waiving their rights to some of these stories, I have been enabled to compile this book. Prefatory Note to Third Edition

Grimm's Fairy Tales This book contains 209 tales collected by the brothers Grimm. The exact print source is unknown. The etext appears to be based on the translation by Margaret Hunt called Grimm's Household Tales, but it is not identical to her edition. (Some of the translations are slightly different, the arrangement also differs, and the Grimm's scholarly notes are not included.) The etext received by the Universal Library did not include story titles. They have been restored in this edition, based on Hunt's titles. Note that these tales are presented more or less as the Grimms collected and edited them (and as Hunt saw fit to translate them). NEW: There is now a more accurate version of the Hunt translation posted by William Barker.

Robert Burns Poem, 'A Cotter's Saturday night.' A "Cotter" in Burns's time was a poor peasant who was given the use of a Cot or Cottage by the property owner in exchange for labour as opposed to paying rent. This poem relates how the Cotter and his family take time to relax on a Saturday evening after their week's labour, knowing that Sunday is a day of rest. The eldest daughter, Jenny, who has by now left home calls with her new boyfriend and the family eat their peasant meal and join round the fireside to hear the father read from the bible. My lov'd, much honour'd, much respected friend! Slam poetry Frost’s Early Poems: “Stopping by Woods on a Snowy Evening” Complete Text Whose woods these are I think I know. His house is in the village, though; He will not see me stopping here To watch his woods fill up with snow.My little horse must think it queer 5 To stop without a farmhouse near Between the woods and frozen lake The darkest evening of the year.He gives his harness bells a shake To ask if there is some mistake. 10 The only other sounds the sweep Of easy wind and downy flake.The woods are lovely, dark, and deep, But I have promises to keep, And miles to go before I sleep, 15 And miles to go before I sleep. Summary On the surface, this poem is simplicity itself. The speaker is stopping by some woods on a snowy evening. Form The poem consists of four (almost) identically constructed stanzas. Within the four lines of each stanza, the first, second, and fourth lines rhyme. The notable exception to this pattern comes in the final stanza, where the third line rhymes with the previous two and is repeated as the fourth line. Commentary