An Interview with Kei Miller. A version of this conversation was broadcast on Writers & Company on CBC Radio One, produced by Sandra Rabinovitch. Kei Miller is an original. I first heard of him when his 2014 poetry collection, The Cartographer Tries to Map a Way to Zion, won England’s prestigious Forward Prize for Poetry. The book imagines a dialogue between a map-maker, a rationalist trying to impose order on an unknown land, and a Rastafarian—or Rastaman—who questions his project, offering a different way of understanding the world.

The judges praised Miller’s ability to “defy expectations” and “set up oppositions only to undermine them,” commending the book’s “boldness and wit.” The Cartographer was his fourth collection. Then I discovered that Miller is also a short-story writer, novelist, and essayist who has been winning prizes since he began publishing eight years earlier. Miller was born in Kingston, Jamaica, just thirty-nine years ago. Kei Miller. Kei Miller. About Kei Miller "Raise high the roofbeams, here comes a strong new presence in poetry," wrote Lorna Goodison when Kei Miller burst onto the poetry scene with his 2006 debut Kingdom of Empty Bellies. Miller was born in Jamaica in 1978 and read English at the University of the West Indies, before completing an MA at Manchester Metropolitan University. He has said in interview with Nicholas Laughlin, that the title and the themes of his first collection, stem from his belief that "so much of what is beautiful [in the Caribbean] comes out of depression and emptiness.

" In 2007, he edited Carcanet's New Caribbean Poetry Anthology - a sparkling showcase for a range of Caribbean identities and experiences. Kei Miller's second collection There is an Anger that Moves, begins with the sequence 'In This Country', which explores an incomer’s experience of moving to the UK. This recording was made at the Audio Workshop, London on March 27th 2009 and produced by Richard Carrington. Under the Saltire Flag. 1. 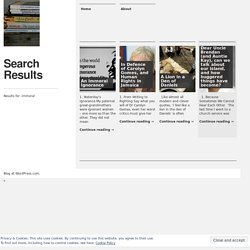 Yesterday’s Ignorance My paternal great-grandmothers were ignorant women – one more so than the other. They did not mean Continue reading → 1. From Writing to Righting Say what you will of Dr Carolyn Gomes, even her worst critics must give her Continue reading → Like almost all modern and clever quotes, ‘I feel like a lion in the den of Daniels’ is often Continue reading → 1. Cancel Privacy & Cookies: This site uses cookies. Kei Miller - New Poems. Kei Miller Interview. Kei Miller maps the intersections of race, class and privilege in Jamaica. Jamaican writer Kei Miller is an original. 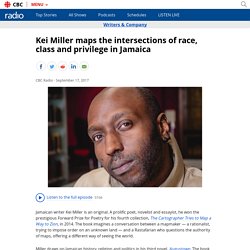 A prolific poet, novelist and essayist, he won the prestigious Forward Prize for Poetry for his fourth collection, The Cartographer Tries to Map a Way to Zion, in 2014. The book imagines a conversation between a mapmaker — a rationalist, trying to impose order on an unknown land — and a Rastafarian who questions the authority of maps, offering a different way of seeing the world. Miller draws on Jamaican history, religion and politics in his third novel, Augustown.

The book revolves around the story of the real-life preacher Alexander Bedward — a largely mocked or forgotten figure — and features a cast of memorable characters, set in a fictionalized version of the real August Town, Jamaica. Kei Miller was born in Kingston, Jamaica, in 1978. Miller spoke with Eleanor Wachtel at the CBC's London studio. Religion: Rastafari. Rasta Patois Dictionary. Rastafarian language. An extract from Rastafari: A Very Short Introduction In rejecting Babylon’s aesthetic of grooming and Babylon’s language conventions, Rastas have developed the iconic dreadlocks hairstyle and their own argot, commonly referred to as ‘dreadtalk’ or ‘Rasta talk’ and as ‘Iyaric’ by others. 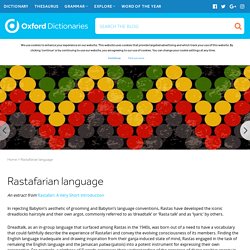 Dreadtalk, as an in-group language that surfaced among Rastas in the 1940s, was born out of a need to have a vocabulary that could faithfully describe the experience of Rastafari and convey the evolving consciousness of its members. Finding the English language inadequate and drawing inspiration from their ganja-induced state of mind, Rastas engaged in the task of remaking the English language and the Jamaican patwa (patois) into a potent instrument for expressing their own perspective.

The conviction that the English language was an instrument of Western oppression that robbed Africans of their native speech was central to the creation of an in-group language. Velma Pollard on dreadtalk 1. 2. 3. 4. Rastafarian vocabulary. Rastafarian vocabulary I: replaces "me", which is much more commonly used in Jamaican English than in the more conventional forms. 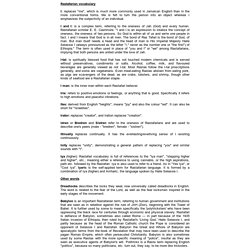 Me is felt to turn the person into an object whereas I emphasises the subjectivity of an individual. I and I: is a complex term, referring to the oneness of Jah (God) and every human. Rastafarian scholar E. E. I-tal: is spiritually blessed food that has not touched modern chemicals and is served without preservatives, condiments or salts. I man: is the inner man within each Rastafari believer. Irie: refers to positive emotions or feelings, or anything that is good. 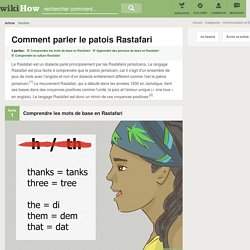