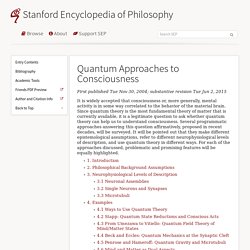 Introduction The problem of how mind and matter are related to each other has many facets, and it can be approached from many different starting points. Of course, the historically leading disciplines in this respect are philosophy and psychology, which were later joined by behavioral science, cognitive science and neuroscience. In addition, the physics of complex systems and quantum physics have played stimulating roles in the discussion from their beginnings. As regards the issue of complexity, this is quite evident: the brain is one of the most complex systems we know.

The original motivation in the early 20th century for relating quantum theory to consciousness was essentially philosophical. Quantum theory introduced an element of randomness standing out against the previous deterministic worldview, in which randomness, if it occurred at all, simply indicated our ignorance of a more detailed description (as in statistical physics). 2. [ma] [me] 3. Turning Empathy into Action. How the nature of design thinking complements and strengthens collective impact frameworks. 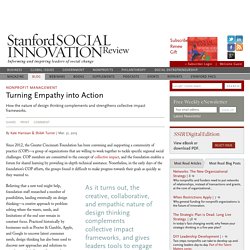 Since 2012, the Greater Cincinnati Foundation has been convening and supporting a community of practice (COP)—a group of organizations that are willing to work together to tackle specific regional social challenges. COP members are committed to the concept of collective impact, and the foundation enables a forum for shared learning by providing in-depth technical assistance. Nonetheless, in the early days of the foundation’s COP efforts, the groups found it difficult to make progress towards their goals as quickly as they wanted to. As it turns out, the creative, collaborative, and empathic nature of design thinking complements collective impact frameworks, and gives leaders tools to engage and empower community members as designers of their own solutions.

Learning the Design Thinking Approach In one case, the challenge was to encourage more people to enter into advanced manufacturing careers. 7 Ways to Deal with Toxic People. Relationships are one of the pillars of our experience of life. 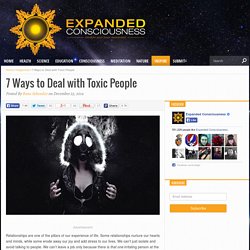 Some relationships nurture our hearts and minds, while some erode away our joy and add stress to our lives. We can’t just isolate and avoid talking to people. We can’t leave a job only because there is that one irritating person at the office. So we learn to adapt and explore new ways to surf through some unpleasant ones. This also helps us to grow as people and prepare us for bigger, better challenges with great rewards.

There are some people who are difficult to be around. I have personally have been both effected by toxic people and have at some point in my life been toxic to people I cared about (including myself). 1) Don’t expect or pressure them to change The energy of expectation is a lower energy and creates resistance in people. 2) Love yourself enough to set the boundaries you need. A long meditation on reinventing the spiritual life for the 21st century: social action, meditation etc, work skills (with tweets) · skinnyill. Small Rebellions, Michelle Chen interviews Grace Lee Boggs. The civil rights icon on Detroit, the limits of protest organizing, and what she’s learned over seven decades of activism. 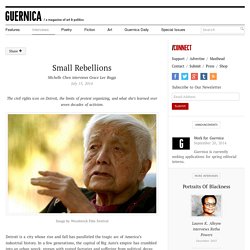 Image by Woodstock Film Festival Detroit is a city whose rise and fall has paralleled the tragic arc of America’s industrial history. In a few generations, the capital of Big Auto’s empire has crumbled into an urban wreck, strewn with rusted factories and suffering from political decay. It’s a city associated with deep stagnation. So it might seem surprising that it claims as one of its most esteemed public figures Grace Lee Boggs, a Chinese-American philosopher who has been refusing to stand still for nearly a century, mobilizing alongside various freedom struggles from civil rights to climate change campaigns.

Born on the eve of the Bolshevik Revolution, the daughter of a Chinese-American restaurant owner and philosophy doctorate steeled her political analysis translating Marx’s treatises and palling around with Malcolm X. Brene Brown: The power of vulnerability. DN! AMY GOODMAN: Today, we’re broadcasting from London, and we’re joined by Russell Brand. 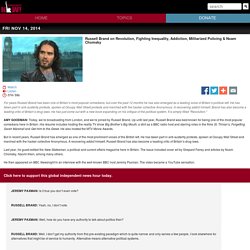 Up until last year, Russell Brand was best known for being one of the most popular comedians here in Britain. His résumé includes hosting the reality TV show Big Brother’s Big Mouth, a stint as a BBC radio host and starring roles in the films St. Trinian’s, Forgetting Sarah Marshall and Get Him to the Greek. He also hosted the MTV Movie Awards. But in recent years, Russell Brand has emerged as one of the most prominent voices of the British left.

Last year, he guest-edited the New Statesman, a political and current affairs magazine here in Britain. He then appeared on BBC Newsnight in an interview with the well-known BBC host Jeremy Paxman. Click here to support this global independent news hour today. JEREMY PAXMAN: Is it true you don’t even vote? RUSSELL BRAND: Yeah, no, I don’t vote. JEREMY PAXMAN: Well, how do you have any authority to talk about politics then? JEREMY PAXMAN: They being? [break] Democracy Now! sur Twitter : "TODAY: Amy Goodman interviews @rustyrockets about his book, "Revolution." #Livestream 8am ET.