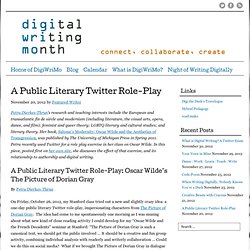 Her book, , was published by The University of Michigan Press in Spring 2011. Petra recently used Twitter for a role play exercise in her class on Oscar Wilde. In this piece, posted first on , she discusses the effect of that exercise, and its relationship to authorship and digital writing. A Public Literary Twitter Role-Play: Oscar Wilde’s The Picture of Dorian Gray By. Ralph Ellison on Race and the Power of the Writer in Society: A Rare 1966 Interview. Scholarly Work on Teaching and Learning Award Takes on “Content Coverage” June 6, 2012 By: Maryellen Weimer, PhD in Teaching Professor Blog Each year Magna Publications sponsors an award recognizing an outstanding piece of scholarly work on teaching and learning. 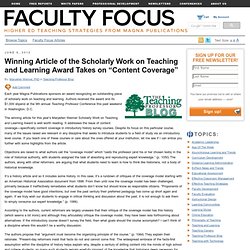 Authors received the award and its $1,000 stipend at the 9th annual Teaching Professor Conference this past weekend in Washington, D.C. The winning article for this year’s Maryellen Weimer Scholarly Work on Teaching and Learning Award is well worth reading. It addresses the issue of content coverage—specifically content coverage in introductory history survey courses. The Best of the Humanities on the Web. Ten Fun Ways to Use YouTube Videos in an Online Literature Class. 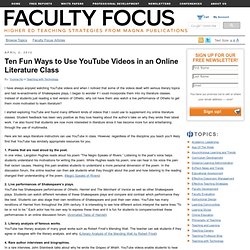 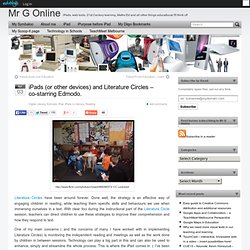 Done well, the strategy is an effective way of engaging children in reading, while teaching them specific skills and behaviours we use when immersing ourselves in a text. With clear foci during the instructional part of the Literature Circle session, teachers can direct children to use these strategies to improve their comprehension and how they respond to text. To Tweet or Not to Tweet  Over the past twelve years, I’ve watched my students progress from MySpace to Facebook to Twitter, not to mention the hundreds of other apps-of-the-moment. 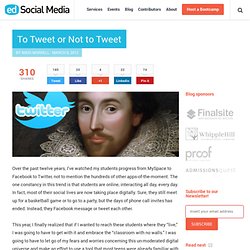 The one constancy in this trend is that students are online, interacting all day, every day. In fact, most of their social lives are now taking place digitally. Sure, they still meet up for a basketball game or to go to a party, but the days of phone call invites has ended. Instead, they Facebook message or tweet each other. 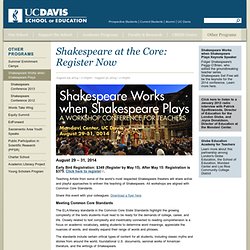 After May 15: Registration is $375. Click here to register. Teaching Artists from some of the world’s most respected Shakespeare theaters will share active and playful approaches to enliven the teaching of Shakespeare. All workshops are aligned with Common Core Standards. Share this event with your colleagues. Meeting Common Core Standards The ELA/literacy standards in the Common Core State Standards highlight the growing complexity of the texts students must read to be ready for the demands of college, career, and life. The standards include certain critical types of content for all students, including classic myths and stories from around the world, foundational U.S. documents, seminal works of American literature, and the writings of Shakespeare.

In fact, Shakespeare is the only author included specifically in the ELA standards for the Common Core. Continuing Education Units. Film.

Lab Day! « Lisa’s. Over the last few years of developing a technique I’m happy with in discussion forums (see Discussion Goodness from 2009), I’ve also been experimenting with something similar in the classroom at San Elijo. 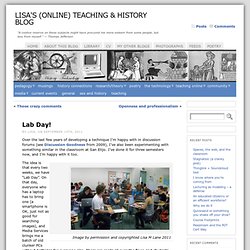 I’ve done it for three semesters now, and I’m happy with it too. The idea is that every two weeks, we have “Lab Day”. On that day, everyone who has a laptop has to bring one (a smartphone is OK, just not as good for searching images), and Media Services brings me a batch of old clunker PCs without batteries for everyone else. There are cords all over the floor, and students arranged in small groups. The task, during our 75 minute class, is to create a collection of three primary sources related to that week’s era, then develop athesis and present it to the class with the evidence.

Students search the web for primary sources related to, say, the French Revolution. What could a new anthology of American literature look like? By Werner Sollors In currently available anthologies of American literature there appears to be a general double standard at work, as “general American” texts by “mainstream authors” are selected primarily for their aesthetic accomplishment and historical-political significance as well as for the cultural fascination they hold, whereas African American, multiethnic, and many women’s works are chosen primarily for their authenticity. 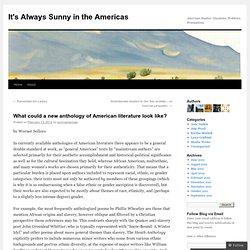 Literature Study Guides (A) The English Faculty. Anna smith: I spy #literacies learning... Teacher's Guides and Analysis Tool - For Teachers. Literary Analysis as Scientific Method - On Hiring. Literary Appreciation + Literary Analysis: A Course Plan « Classroom as Microcosm. Regular commenter Crystal has asked for some more details about my Personal Narrative course, in which I focus less on literary analysis and more on literary appreciation. 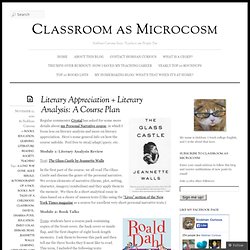 Lit Bits » Blog Archive » Teaching Literature: Student Contexts and Discussion Openers. Providing Background Knowledge: Effective Scaffold or Spoon-feeding? Two weeks ago I looked at one of the recommendations found in the Common Core Standards Publisher’s Criteria for Grades K-2 and 3-5, which attempt to lay out some guidelines for designing Standards-based reading curriculum. 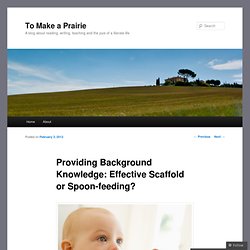 In addition to questioning strategy instruction, both Criteria also offer caveats against front-loading information or engaging students in pre-reading activities that provide them with access to a text’s ideas without actually grappling with the text itself. Lit Bits » Blog Archive » Student-directed Questioning. One of our challenges as teachers of literature is to encourage students to move from simply answering questions we ask to formulating their own questions. To get at this, I have students write two discussion questions every day we meet as a class and e-mail them to me no later than 30 minutes before the class begins. From there, I take the questions, group them according to common themes and lead a seminar-style discussion. (This format works better in upper division courses, but this is easily adapted in larger first year courses by imposing earlier deadlines). Students need to learn how to ask discussion questions, because too frequently they simply ask questions that focus on plot points or basic facts.

TuckerReader%20Response. Lit Bits » Blog Archive » What Do You Envision? Mashups in the Literature Classroom.