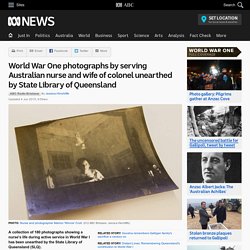 The photographer and nurse Marion Winifred Croll — known as 'Winnie' — took many snaps during her service and leave throughout Egypt in 1915. The library recently acquired the collection after recognising one of the photographs up for sale in an online auction. State Library curator Robyn Hamilton said that one of the photos in the auction was similar to a photo of Ms Croll currently being used in one of their exhibitions. "The auction house couldn't identify who the woman was so we had a look at the photos and the penny dropped ... we knew who she was," she said.

"We discovered that she was the wife of a doctor whose collection we have here at the John Oxley Collection; not only that, he is one of the 25 Queenslanders featured in our current Distant Lines exhibition. "It completed a wonderful circle. Uncovering WWI nurses' stories. Devotion. Australian Women in War - Home. Development%20of%20the%20womens%20services. The Nurses. One of the least publicized of all Army services is the Royal Australian Army Nursing Corps, which has given 100 years of dedicated work to caring for Australian servicemen in times of war and its aftermath. 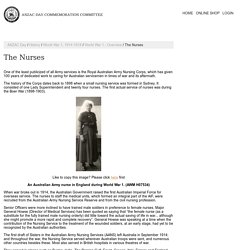 The history of the Corps dates back to 1898 when a small nursing service was formed in Sydney. It consisted of one Lady Superintendent and twenty four nurses. The first actual service of nurses was during the Boer War (1898-1903). Like to copy this image? Please click here first An Australian Army nurse in England during World War 1. When war broke out in 1914, the Australian Government raised the first Australian Imperial Force for overseas service. Senior Officers were more inclined to have trained male soldiers in preference to female nurses.

Women at war - World War I and Australia - Research guides at State Library of New South Wales. Diaries and letters of WWI nurses tell of the horrors and bravery of women who volunteered. Updated Often overlooked, the nurses who volunteered for active service during World War I do not feature prominently in accounts of that bloody and tragic war. 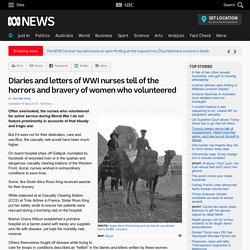 But if it were not for their dedication, care and sacrifice, the casualty rate would have been much higher. On board hospital ships off Gallipoli, inundated by hundreds of wounded men or in the spartan and dangerous casualty clearing stations of the Western Front, Anzac nurses worked in extraordinary conditions to save lives. Some, like Sister Alice Ross King received awards for their bravery. While stationed at at Casualty Clearing Station (CCS) at Trois Arbres in France, Sister Ross King put her safety aside to ensure her patients were rescued during a bombing raid on the hospital.

Matron Grace Wilson established a primitive hospital on a barren island with barely any supplies and rife with disease, yet kept the mortality rate minimal. No supplies and hundreds of wounded on Lemnos Bravery at Trois Arbres. Great War nurses. I have never regretted that I took the notion into my head to take on nursing, for it has opened up opportunities that I would never have had. 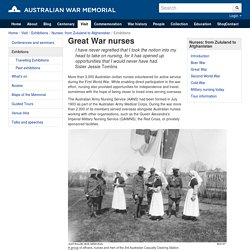 Sister Jessie Tomlins More than 3,000 Australian civilian nurses volunteered for active service during the First World War. While enabling direct participation in the war effort, nursing also provided opportunities for independence and travel, sometimes with the hope of being closer to loved ones serving overseas. Australian Nurses in World War 1 - Home. Women in action - nurses and serving women. A WAAAF Meteorological Officer adjusting a theodolite, 1942. 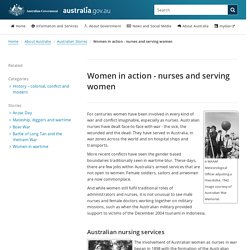 Image courtesy of Australian War Memorial. For centuries women have been involved in every kind of war and conflict imaginable, especially as nurses. Australian nurses have dealt face-to-face with war - the sick, the wounded and the dead. They have served in Australia, in war zones across the world and on hospital ships and transports. More recent conflicts have seen the gender based boundaries traditionally seen in wartime blur. And while women still fulfil traditional roles of administrators and nurses, it is not unusual to see male nurses and female doctors working together on military missions, such as when the Australian military provided support to victims of the December 2004 tsunami in Indonesia. 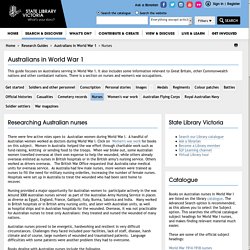 A handful of Australian women worked as doctors during World War I. Click on Women's war work for books on this subject. Women in Australia helped the war effort through charitable work such as fund-raising, knitting or sending food to the troops. When war broke out, some Australian women travelled overseas at their own expense to help the wounded, while others already overseas enlisted as nurses in British hospitals or in the British army’s nursing service. Others worked as drivers overseas. Nursing provided a major opportunity for Australian women to participate actively in the war. Australian nurses proved to be energetic, hardworking and resilient in very difficult circumstances. Books dealing with Australian nurses include the following. See the Library catalogue for more resources. Service records.