PhotoJournalism: How to write a cutline. A cutline is the caption near a photograph in a newspaper. 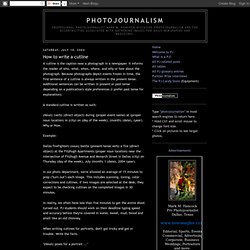 It informs the reader of who, what, when, where, and why or how about the photograph. Because photographs depict events frozen in time, the first sentence of a cutline is always written in the present tense. Additional sentences can be written in present or past tense depending on a publication's style preferences (I prefer past tense for explanation). A standard cutline is written as such: (Noun) (verb) (direct object) during (proper event name) at (proper noun location) in (city) on (day of the week), (month) (date), (year). Example: Dallas firefighters (noun) battle (present-tense verb) a fire (direct object) at the Fitzhugh Apartments (proper noun location) near the intersection of Fitzhugh Avenue and Monarch Street in Dallas (city) on Thursday (day of the week), July (month) 1 (date), 2004 (year). In our photo department, we're allowed an average of 15 minutes to prep ("turn out") each image. "(Noun) poses for a portrait ...

" Hool of Journalism and Mass Communications. Who are the most widely read writers in the newspaper? 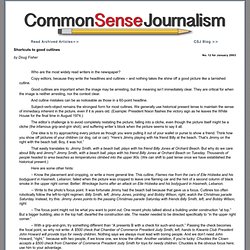 Copy editors, because they write the headlines and cutlines – and nothing takes the shine off a good picture like a tarnished cutline. Good cutlines are important when the image may be arresting, but the meaning isn’t immediately clear. They are critical for when the image is neither arresting, nor the context clear. And cutline mistakes can be as noticeable as those in a 60-point headline. Subject-verb-object remains the strongest form for most cutlines.

The editor’s challenge is to avoid completely restating the picture; falling into a cliche, even though the picture itself might be a cliche (the infamous grip-and-grin shot); and suffering writer’s block when the picture seems to say it all. One idea is to try approaching every picture as though you were pulling it out of your wallet or purse to show a friend. Writing Photo Captions and Cutlines. Photo captions and cutlines are the most read body type in a publication. 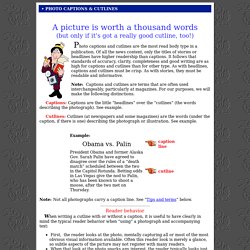 Of all the news content, only the titles of stories or headlines have higher readership than captions. It follows that standards of accuracy, clarity, completeness and good writing are as high for captions and cutlines than for other type. As with headlines, captions and cutlines must be crisp. As with stories, they must be readable and informative. Note: Captions and cutlines are terms that are often used interchangeably, particularly at magazines. Copy editors are storytellers too. Pam Robinson at Words at Work has taken note of yet another article about the future of newspapers. 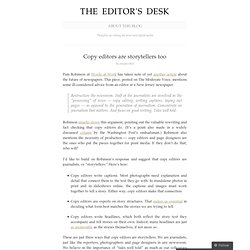 This piece, posted on The Moderate Voice, mentions some ill-considered advice from an editor at a New Jersey newspaper: Restructure the newsroom. Half of the journalists are involved in the “processing” of news — copy editing, writing captions, laying out pages — as opposed to the generation of journalism. Concentrate on journalism that matters. Illustrate Picture Books-Class 4.

Escapism in Children’s Literature. Children’s literature can take many forms, from sweeping sci-fi and fantasy epics to riveting who-done-it mysteries. 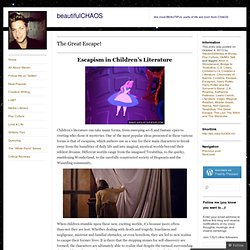 One of the most popular ideas presented in these various forms is that of escapism, which authors use as a way for their main characters to break away from the banalities of daily life and into magical, mystical worlds beyond their wildest dreams. Different worlds range from the imagined Terabithia, to the quirky, maddening Wonderland, to the carefully constructed society of Hogwarts and the Wizarding community. When children stumble upon these new, exciting worlds, it’s because more often-than-not they are lost. Whether dealing with death and tragedy, loneliness and negligence, mistrust and familial obstacles, or even boredom, they are led to new realms to escape their former lives. Building the Bridge: The Need to Escape The need to escape from reality is something all children desire. Neil Gaiman: The Interview. This piece originally appeared on newstatesman.com. 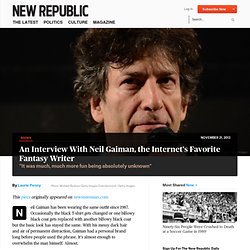 Neil Gaiman has been wearing the same outfit since 1987. Occasionally the black T-shirt gets changed or one billowy black coat gets replaced with another billowy black coat but the basic look has stayed the same. With his messy dark hair and air of permanent distraction, Gaiman had a personal brand long before people used the phrase. Alliteration. By Simon Kewin A couple of previous Daily Writing Tips posts looked at when to use rhyme in poetry and also at the various types of rhyme available to the poet. 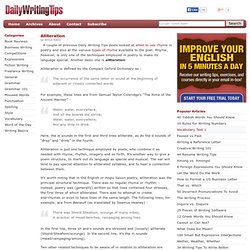 Rhyme, however, is only one of the techniques employed in poetry to make its language special. Another basic one is alliteration. Alliteration is defined by the Compact Oxford Dictionary as : The occurrence of the same letter or sound at the beginning of adjacent or closely connected words. For example, these lines are from Samuel Taylor Coleridge’s “The Rime of the Ancient Mariner” : Water, water, everywhere, And all the boards did shrink; Water, water, everywhere, Nor any drop to drink.