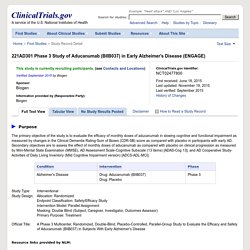 Aducanumab. A Phase 1 safety and pharmacokinetics study began with a single-ascending-dose trial of 0.3 mg/kg to 30 mg/kg intravenous BIIB037 in 56 people with mild to moderate AD. 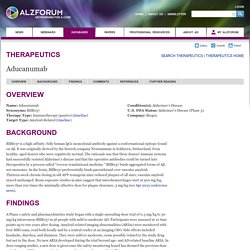 Participants were assessed at 10 time points up to two years after dosing. Amyloid-related imaging abnormalities (ARIAs) were monitored with four MRI scans, read both locally and by a central reader at an imaging CRO. Side effects included headache, diarrhea, and dizziness. They were mild or moderate, some possibly related to the study drug but not to the dose. No new ARIA developed during the trial beyond age- and AD-related baseline ARIA. In summer 2012, Biogen Idec started PRIME, a multicenter, multiple-dose study in 166 people with prodromal or mild AD. In December 2014, Biogen announced it would move into Phase 3 based on interim data suggesting target engagement and a cognitive benefit (Bloomberg news).

In August 2015, Phase 3 began with two efficacy trials. Alzheimer's Treatment and Psychological Therapy - Alzheimer's Disease Center. Alzheimer's disease is best known for causing loss of memory and intellectual ability, but it also can include a number of behavioral and psychological symptoms. 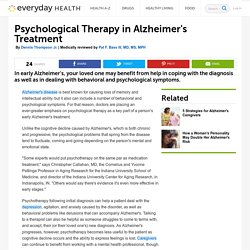 For that reason, doctors are placing an ever-greater emphasis on psychological therapy as a key part of a person's early Alzheimer's treatment. Unlike the cognitive decline caused by Alzheimer's, which is both chronic and progressive, the psychological problems that spring from the disease tend to fluctuate, coming and going depending on the person's mental and emotional state. "Some experts would put psychotherapy on the same par as medication treatment," says Christopher Callahan, MD, the Cornelius and Yvonne Pettinga Professor in Aging Research for the Indiana University School of Medicine, and director of the Indiana University Center for Aging Research, in Indianapolis, IN. Heimer's Association - Early Stage Caregiving. In the early stages of Alzheimer's, a person may function independently. 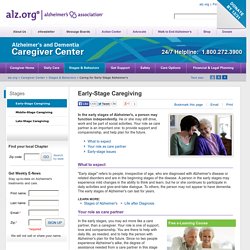 He or she may still drive, work and be part of social activities. Your role as care partner is an important one: to provide support and companionship, and help plan for the future. What to expect. Dementia, Truth and Rights - Nuffield Bioethics. Glasgow 20th-22nd October 2014 – outside, the edge of Hurricane Gonzalo whipping up the River Clyde; inside, talk of human rights exciting the delegates at the 24th annual conference of Alzheimer Europe. 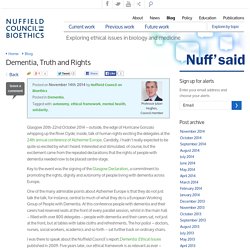 Candidly, I hadn’t really expected to be quite so excited by what I heard. Interested and stimulated, of course, but the excitement came from the repeated declarations that the rights of people with dementia needed now to be placed centre-stage. Key to the event was the signing of the Glasgow Declaration, a commitment to promoting the rights, dignity and autonomy of people living with dementia across Europe. One of the many admirable points about Alzheimer Europe is that they do not just talk the talk; for instance, central to much of what they do is a European Working Group of People with Dementia. I was there to speak about the Nuffield Council’s report Dementia: Ethical Issues published in 2009. 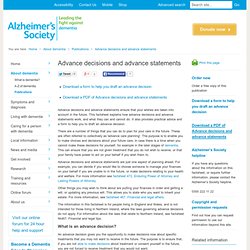 This factsheet explains how advance decisions and advance statements work, and what they can and cannot do. It also provides practical advice and a form to help you to draft an advance decision. There are a number of things that you can do to plan for your care in the future. These are often referred to collectively as 'advance care planning'. The purpose is to enable you to make choices and decisions about your future care, in case there is a time when you cannot make these decisions for yourself, for example in the later stages of dementia. Advance decisions and advance statements are just one aspect of planning ahead. 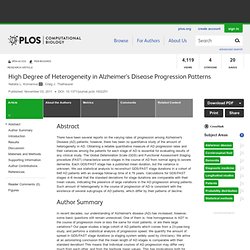 Obtaining a reliable quantitative measure of AD progression rates and their variances among the patients for each stage of AD is essential for evaluating results of any clinical study. The Global Deterioration Scale (GDS) and Functional Assessment Staging procedure (FAST) characterize seven stages in the course of AD from normal aging to severe dementia. Each GDS/FAST stage has a published mean duration, but the variance is unknown. Risk_factors_for_AD.pdf. Medscape Log In. Alzheimer's disease: rapid and slow progression. Abstract The variability in the progression of Alzheimer's disease (AD) across patients has made identification of disease-delaying treatments difficult. 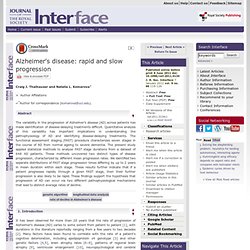 Quantitative analysis of this variability has important implications in understanding the pathophysiology of AD and identifying disease-delaying treatments. The functional assessment staging (FAST) procedure characterizes seven stages in the course of AD from normal ageing to severe dementia. The present study applied statistical methods to analyse FAST stage durations from a dataset of 648 AD patients. These methods uncovered two distinct types of disease progression, characterized by different mean progression rates. 1.