No Cookies. The future is Nao at Whitlam Library. VISION 2017 Grants (Public Libraries Connect) Coding and Robotics Grants 2016 Reflecting all of the themes outlined in The Next Horizon: Vision 2017 for Public Libraries ( ), funding of over $300,000 has been awarded to 33 councils (PDF 380.8 KB) ( ) to deliver coding and robotics programs through public libraries across Queensland. 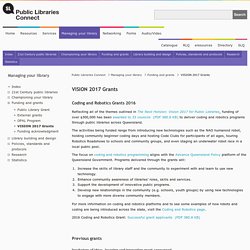 The activities being funded range from introducing new technologies such as the NAO humanoid robot, holding community beginner coding days and hosting Code Clubs for participants of all ages, touring Robotics Roadshows to schools and community groups, and even staging an underwater robot race in a local public pool. Robots for Everyone - Noosa Library. We are excited to be the first Australian Public Library Service to deliver a program using this state of the art robotics technology. 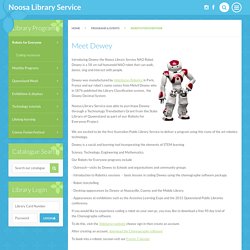 Dewey is a social and learning tool incorporating the elements of STEM learning Science, Technology, Engineering and Mathematics. Our Robots for Everyone programs include · Outreach—visits by Dewey to Schools and organisations and community groups · Introduction to Robotics sessions - basic lessons in coding Dewey using the choreographe software package. · Robot storytelling · Desktop appearances by Dewey at Noosaville, Cooroy and the Mobile Library. · Appearances at exhibitions such as the Assistive Learning Expo and the 2015 Queensland Public Libraries conference.

If you would like to experience coding a robot on your own pc, you may like to download a free 90 day trial of the Choreographe software. To do this, visit the Aldebaran website choose sign in then create an account. Smart Toy Robot. Ozobot (Public Libraries Connect) If you are looking for a fun and simple way to introduce activities for children and teens about robotics and coding in your library, why not use an Ozobot? 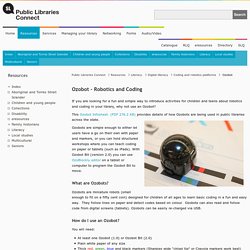 This Ozobot Infosheet (PDF 276.2 KB) ( ) provides details of how Ozobots are being used in public libraries across the state. Ozobots are simple enough to either let users have a go on their own with paper and markers, or you can hold structured workshops where you can teach coding on paper or tablets (such as iPads). With Ozobot Bit (version 2.0) you can use OzoBlockly editor ( ) on a tablet or computer to program the Ozobot Bit to move. What are Ozobots? Ozobots are miniature robots (small enough to fit on a fifty cent coin) designed for children of all ages to learn basic coding in a fun and easy way. How do I use an Ozobot? You will need: Ozobots follow any thick line that you draw using a marker. How to use Ozobot - Part 1 Video length: 1 minute 52 seconds. Discover Nao, the little humanoid robot from Aldebaran. 58 cm in height, NAO is our first humanoid robot. 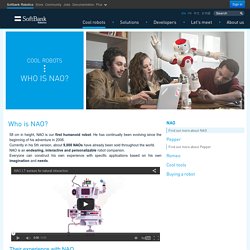 He has continually been evolving since the beginning of his adventure in 2006.Currently in his 5th version, about 9,000 NAOs have already been sold throughout the world.NAO is an endearing, interactive and personalizable robot companion.Everyone can construct his own experience with specific applications based on his own imagination and needs. Their experience with NAO. Libraries are for making Robots. The future of academic librarianship. Robotics at the Library.

The Westport Library's two NAO robots, Vincent and Nancy, have been the talk of the town during their time here. 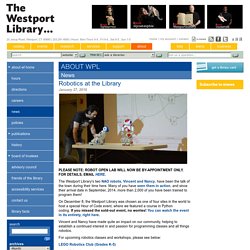 Many of you have seen them in action, and since their arrival date in September, 2014, more than 2,000 of you have been trained to program them! On December 8, the Westport Library was chosen as one of four sites in the world to host a special Hour of Code event, where we featured a course in Python coding. If you missed the sold-out event, no worries! You can watch the event in its entirety, right here. Vincent and Nancy have made quite an impact on our community, helping to establish a continued interest in and passion for programming classes and all things robotics. 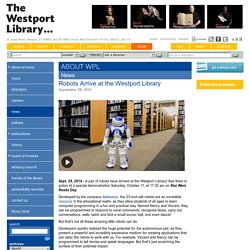 See them in action at a special demonstration Saturday, October 11, at 11:30 am on Star Wars Reads Day. But that's not all these amazing little robots can do. Developers quickly realized the huge potential for the autonomous pair, as they present a powerful and incredibly expressive medium for creating applications that can tailor the robots to work with us. For example, Vincent and Nancy can be programmed to tell stories and speak languages.

But that's just scratching the surface of their potential impact. As featured in The Wall Street Journal and The Hour, there are big plans for the robots. Google Donates Robots to Chicago Public Library. As part of its ongoing initiative to offer library patrons access to 21st-century technology, Chicago Public Library (CPL) has added programmable Finch Robots to its catalog. 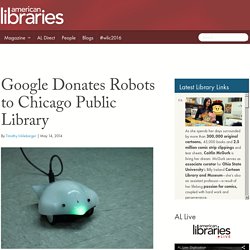 The library is partnering with Google to offer 500 of the robots, which can be picked up at the Harold Washington YOUmedia Center, two regional libraries (Sulzer and Woodson) and three branch locations (Austin–Irving, Back of the Yards, and Wrightwood–Ashburn), CPL spokeswoman Mary Beth Kraft tells American Libraries. The robots are available for hold at all 80 of the system’s Chicago-area branches.

The robots, which were developed at Carnegie Mellon University’s CREATE (Community Robotics, Education, And Technology Empowerment) Lab, aim to teach children and adults the fundamentals of computer programming and are geared toward patrons ages 8 and up, Kraft explains. Students can program the robots in more than a dozen computer languages to perform functions such as move, make noise, light up, and draw. 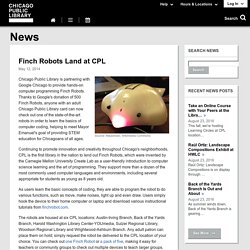 Thanks to Google's donation of 500 Finch Robots, anyone with an adult Chicago Public Library card can now check out one of the state-of-the-art robots in order to learn the basics of computer coding, helping to meet Mayor Emanuel's goal of providing STEM education for Chicagoans of all ages. Continuing to promote innovation and creativity throughout Chicago's neighborhoods, CPL is the first library in the nation to lend out Finch Robots, which were invented by the Carnegie Mellon University Create Lab as a user-friendly introduction to computer science learning and the art of programming.

They support more than a dozen of the most commonly used computer languages and environments, including several appropriate for students as young as 8 years old.