The aftermath of World War One... What had changed? 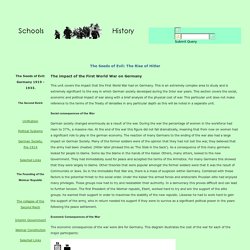 This is an extremely complex area to study and is extremely significant to the way in which German society developed during the Inter war years. This section covers the social, economic and political impact of war along with a brief analysis of the physical cost of war. This particular unit does not make reference to the terms of the Treaty of Versailles in any particular depth as this will be noted in a separate unit. Social consequences of the War. WWI The aftermath - History of England. The few years after the war saw more boundary changes world wide than in any similar timescale before or since. 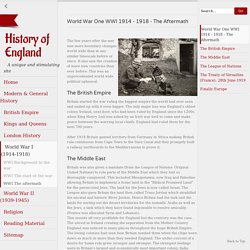 It also saw the creation of more new countries than ever before. This was an unprecedented world wide political upheaval. The British Empire Britain started the war ruling the biggest empire the world had ever seen and ended up with it even bigger. Europe After World War I: November 1918-August 1931. On May 7, 1919, in a room in the grand Versailles Palace outside Paris, German foreign minister Count Ulrich von Brockdorff-Rantzau arrived at the head of a delegation of diplomats. 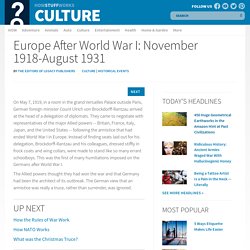 They came to negotiate with representatives of the major Allied powers -- Britain, France, Italy, Japan, and the United States -- following the armistice that had ended World War I in Europe. Instead of finding seats laid out for his delegation, Brockdorff-Rantzau and his colleagues, dressed stiffly in frock coats and wing collars, were made to stand like so many errant schoolboys. This was the first of many humiliations imposed on the Germans after World War I. Shell-shocked: Australia after Armistice – National Archives of Australia. After the war comes the battle... 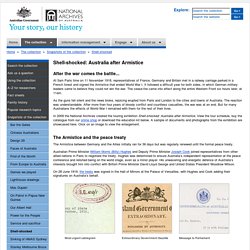 At 5am Paris time on 11 November 1918, representatives of France, Germany and Britain met in a railway carriage parked in a French forest and signed the Armistice that ended World War I. It followed a difficult year for both sides, in which German military leaders came to believe they could not win the war. Effects of WWI lingered long in Australia. When Billy Hughes became Australia's seventh prime minister six months after the landings at Anzac Cove, few outside the Commonwealth knew much of either him or the country he led. 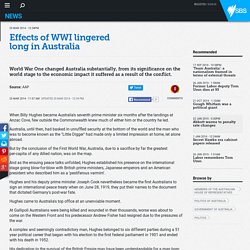 Australia, until then, had basked in unruffled security at the bottom of the world and the man who was to become known as the "Little Digger" had made only a limited impression at home, let alone abroad. But by the conclusion of the First World War, Australia, due to a sacrifice by far the greatest per-capita of any Allied nation, was on the map. And as the ensuing peace talks unfolded, Hughes established his presence on the international stage going blow-for-blow with British prime ministers, Japanese emperors and an American president who described him as a 'pestiferous varmint'. Hughes and his deputy prime minister Joseph Cook nevertheless became the first Australians to sign an international peace treaty when on June 28, 1919, they put their names to the document that dictated Germany's post-war fate. BBC Schools - After the war. 8 January 2014Last updated at 16:58 Postcard with illustration of the Allies flags (circa 1917) After the war, the Allied countries wanted to ensure that there was peace for a long time. 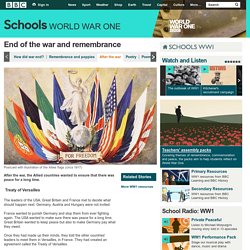 Treaty of Versailles The leaders of the USA, Great Britain and France met to decide what should happen next. Exhibitions & Learning online. Aftermath of the First World War - The British Library. Changing lives: gender expectations and roles during and after World War One. Considering the roles of both men and women during World War One, Susan R Grayzel asks to what extent the war challenged gender roles and to what degree society accepted them. 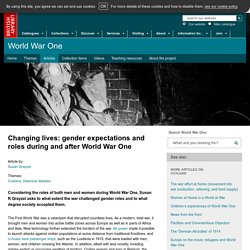 The First World War was a cataclysm that disrupted countless lives. As a modern, total war, it brought men and women into active battle zones across Europe as well as in parts of Africa and Asia. New technology further extended the borders of the war. Air power made it possible to launch attacks against civilian populations at some distance from traditional frontlines, and U-boats sank passenger ships, such as the Lusitania in 1915, that were loaded with men, women, and children crossing the Atlantic.

Aftermath of the First World War. Professor David Stevenson explains how the Treaty of Versailles, the Treaties of Saint-Germain and Trianon and the Treaties of Neuilly and Sèvres re-drew Europe's post-war boundaries. 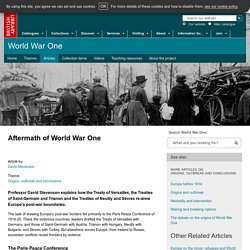 The task of drawing Europe’s post-war borders fell primarily to the Paris Peace Conference of 1919-20. There the victorious countries’ leaders drafted the Treaty of Versailles with Germany, and those of Saint-Germain with Austria, Trianon with Hungary, Neuilly with Bulgaria, and Sèvres with Turkey. Returning soldiers. In the second half of 1918, a series of victories for the Allied forces and significant advances on German held territory led to the feeling that the war was finally coming to a close. 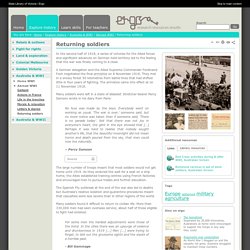 A German delegation and the Allied Supreme Commander Ferdinand Foch negotiated the final armistice on 8 November 1918.