How FIFA's The Journey revolutionised EA's approach to diversity. EA exec lays out a vision of the future. What went into Apex Legends' surprise launch? How EA's Criterion gets Agile in triple-A game production. Steve Cuss has head of studio operations at Criterion since 2018. 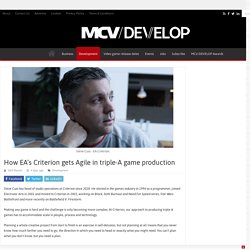 He started in the games industry in 1994 as a programmer, joined Electronic Arts in 2001 and moved to Criterion in 2003, working on Black, both Burnout and Need For Speed series, Star Wars Battlefront and more recently on Battlefield V: Firestorm. Making any game is hard and the challenge is only becoming more complex. At Criterion, our approach to producing triple-A games has to accommodate scale in people, process and technology. Planning a whole creative project from start to finish is an exercise in self-delusion, but not planning at all means that you never know how much farther you need to go, the direction in which you need to head or exactly what you might need.

You can’t plan what you don’t know, but you need a plan. Criterion’s approach to meeting that challenge is firmly grounded in our people and process philosophies. Our approach builds upon Agile (Scrum) and Scaled Agile Framework (SAFe). The Rise and Fall of EA Sports Big, as Told by the Creator of SSX. How EA's Star Wars video game developers are approaching the creative process. MONTREAL — Contrary to what you might think, the creators of upcoming Star Wars games are not just waiting to get the scripts handed to them by the makers of the new episodes of Star Wars movies. 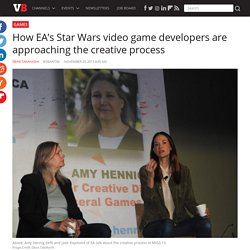 The video games are not going to be carbon copies of the movie experiences. Amy Hennig, creative director at Electronic Arts’ Visceral Games studio in Redwood City, Calif., and Jade Raymond, head of the new EA Motive studio in Montreal, are hoping to create interesting new experiences in the universe of the upcoming Disney/Lucasfilm Star Wars movies, the first of which, Star Wars: The Force Awakens, debuts on Dec. 18. EA’s Star Wars Battlefront multiplayer game is out now (Hennig and Raymond did not work on this game, which was created by EA’s DICE studio), but we haven’t heard much about the console games based on the new trilogy of films yet. The organizers of MIGS 15 paid my way to Montreal. Our coverage remains objective. Inside the Making of “Mass Effect: Andromeda” – Darryn King. On Wednesday 22 February, there was a curious, disbelieving buzz in the studios of the video game developer BioWare in downtown Montreal. 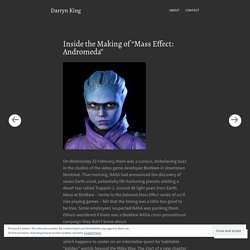 That morning, NASA had announced the discovery of seven Earth-sized, potentially life-harboring planets orbiting a dwarf star called Trappist-1, around 40 light years from Earth. Many at BioWare – home to the beloved Mass Effect series of sci-fi role playing games – felt that the timing was a little too good to be true. Some employees suspected NASA was punking them. Others wondered if there was a BioWare-NASA cross-promotional campaign they didn’t know about. Ten years ago, the first Mass Effect was hailed as the game that “Does For Games What Star Wars Did For Films”. Also a fan: NASA visualization scientist Robert Hurt, one of the Spitzer Space Telescope project artists behind the official illustrations of the Trappist-1 system. Mass Effect takes its science seriously. To read the full story, please visit Rolling Stone‘s Glixel. Being the boss of Dragon Age. Ex Bioware Boss Says EA Is Excellent at Giving Creative Freedom and Didn't Impose Frostbite Engine.

Former Bioware boss Aaryn Flynn left the company in July 2017, as you might recall, with Casey Hudson taking his place as the studio’s General Manager. 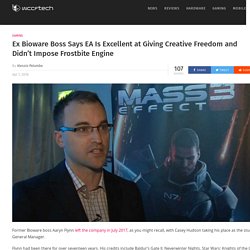 Flynn had been there for over seventeen years. His credits include Baldur’s Gate II, Neverwinter Nights, Star Wars: Knights of the Old Republic, Jade Empire, Mass Effect, Dragon Age: Origins. Then he became the Bioware boss and oversaw the production and development of Dragon Age II, Mass Effect 3, Dragon Age: Inquisition and Mass Effect: Andromeda. Related Spiders CEO: There Aren’t That Many Developers Doing RPGs Anymore, Even BioWare Stopped During this year’s Game Developers Conference, the former Bioware boss was featured in Kotaku’s Splitscreen Podcast and he got the chance to speak about working inside Electronic Arts, sharing opinions that are very much different to what people usually think of the company.

[On whether EA execs require studios to add microtransactions and similar stuff]Not in my experience, no. Creating Worlds: The Future of BioWare – BioWare Blog. Anthem: Interview with producer Scylla Costa Article - Gaming Nexus. The VIP demo of Anthem comes out this weekend, BioWare and EA’s ambitious MMO Shooter that promises to pack a punch for those who want the next big challenge when it comes to a social game that promises a challenge. 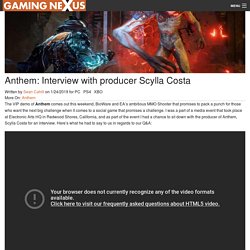 I was a part of a media event that took place at Electronic Arts HQ in Redwood Shores, California, and as part of the event I had a chance to sit down with the producer of Anthem, Scylla Costa for an interview. Here’s what he had to say to us in regards to our Q&A: Gaming Nexus: At the beginning of the event today, it was discussed that BioWare took a few risks with Anthem. What do you think is the biggest risk and how do you see it paying off? How the Frostbite Engine Became a Nightmare for EA in General, and BioWare in Particular. The Collapse Of Visceral's Ambitious Star Wars Game  The Art & Inspiration of Dragon Age: Inquisition. How DICE Does It. Karl Magnus Troedsson, general manager at DICE in Stockholm, has been with the company for 11 years now. 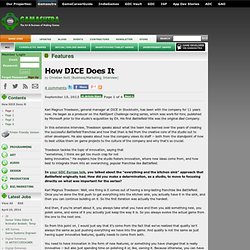 He began as a producer on the RalliSport Challenge racing series, which was work-for-hire, published by Microsoft prior to the studio's acquisition by EA. His first Battlefield title was the original Bad Company.