Indirect Questions. Improve Your Writing with Inversion, Part 2. In last week’s Everyday Grammar, we told you about a few kinds of inversion that are useful in academic writing and common on the TOEFL. But there are others. Today, we’ll talk about three more. In fact, I already used one kind in my introduction. Comparatives Let’s begin with comparatives. She speaks English better than her brother does. Notice that the second subject – her brother – comes after the comparative word “than.” But, we can also use inversion to compare the two subjects. BBC Learning English - Course: English In A Minute / Unit 1 / Session 79 / Activity 1. BBC Learning English - Course: Towards Advanced / Unit 26 / Session 1 / Activity 1. Custom Search. Inversion after "only a few years ago" Syntax - Reason for Subject-Verb Inversion: Only in cases where A is B, shall the Company do X.

Improve Your Writing with Inversion, Part 1. In English, the traditional word order of a statement is subject + verb. 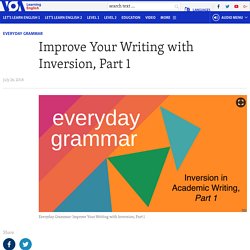 Never do we change the order except when asking a question. Or do we? If you listened closely, you may have noticed that my statement beginning with the word “never” failed to follow the usual order. I put the auxiliary verb “do” before the subject “you” and the main verb “know” after the subject. Using this word order in statements is called “inversion.” We use inversion to add emphasis to statements and variety to our writing. But inversion is not for everyday speech. There are more than 15 types of inversion, but only some are used in academic writing.

How inversion works Getting word order right in inversion is important. The first is that many types of inversion use the auxiliary verb + subject + main verb word order. The second is that inversion usually puts the thing we want to emphasize at the beginning of the sentence. Intro –ED. Adjective Order. Pronoun Order. Lately, people have been asking a lot of questions about pronouns and what order to put them in relative to nouns and other pronouns, so that’s our topic for today.

Here’s an example of a question (changed slightly to protect the writer). We were scheduling a meeting at work, and everyone wanted to have it on Monday, but I couldn’t make it, and I knew another co-worker would be out of town, so I said, “That won’t work for Maria and me,” but then I immediately wondered whether I should have said, “me and Maria.”

Which is it? And does it even matter.” First, the pronouns you use to refer to yourself, such as “me,” and “I,” are different from other pronouns. As an Amazon Associate and a Bookshop.org Affiliate, QDT earns from qualifying purchases. If you were using “I,” the subject pronoun, you’d also put yourself last—for example, if you were to say, “Maria and I can’t make it on Monday.” It’s the same when you’re using two or more pronouns: “She and I can’t make it on Monday.” 1. 2. 3. Learning English. BBC World Service. Ordering multiple adjectives. Adjective phrases: position. We can’t use adjectives with the prefix a- before a noun. 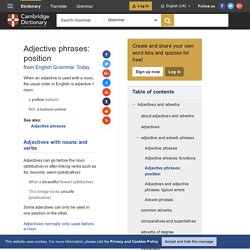 We use them after linking verbs such as be, seem, become, feel, smell, taste. Common examples of adjectives with the prefix a- include awake, alive, asleep, aboard (on a plane, boat, bus or train), afloat, ablaze (on fire): Katie was awake at the time. Not: Katie was an awake person at the time. People were asleep in the bedroom. Not: There were asleep people in the bedroom. The passengers were all aboard when they heard the loud bang. Not: The aboard passengers heard the loud bang. 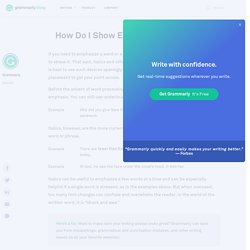 That said, italics and other font changes lose their impact if overused. It is best to use such devices sparingly and rely on strong writing and strategic word placement to get your point across. Before the advent of word processing, it was common to underline words to show emphasis. You can still use underlining in your writing and be correct. Why did you give Sara the sandwich with mustard on it? Italics, however, are the more current—and more elegant—way to emphasize a word or phrase. There are Black Rhinos left on the African continent today.

At last, he saw the face under the cloak’s hood. Italics can be useful to emphasize a few words at a time and can be especially helpful if a single word is stressed, as in the examples above. Here’s a tip: Want to make sure your writing always looks great? Your writing, at its best. Be the best writer in the office. Get Grammarly.