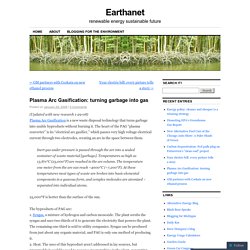 The heart of the PAG “plasma converter” is its “electrical arc gasifier,” which passes very high voltage electrical current through two electrodes, creating an arc in the space between them. Inert gas under pressure is passed through the arc into a sealed container of waste material [garbage]. Temperatures as high as 13,871°C (25,000°F) are reached in the arc column. The temperature one meter from the arc can reach ~4000°C (~7,200°F). At these temperatures most types of waste are broken into basic elemental components in a gaseous form, and complex molecules are atomized – separated into individual atoms. 25,000ºF is hotter than the surface of the sun. The byproducts of PAG are: 1. Gasification Project Database - USA (Massachusetts) - NRG's Somerset Gasification Project Retrofit Project.

PlasmaGasificationRptFinal6710.pdf (application/pdf Object) Plasma Gasification. New Technology Can Get More Energy Out of Waste. Via Plasma2Energy As we look for ways to reduce our dependence on finite oil reserves that emit greenhouse gases and cause climate change, the solutions will come in varied forms. 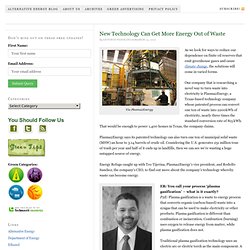 One company that is researching a novel way to turn waste into electricity is Plasma2Energy, a Texas-based technology company whose patented process can convert one ton of waste into 2200kWh of electricity, nearly three times the standard conversion rate of 815 kWh. That would be enough to power 1,400 homes in Texas, the company claims. Plasma2Energy says its patented technology can also turn one ton of municipal solid waste (MSW) an hour to 3.14 barrels of crude oil. Considering the U.S. generates 251 million tons of trash per year and half of it ends up in landfills, then we can see we’re wasting a huge untapped source of energy. 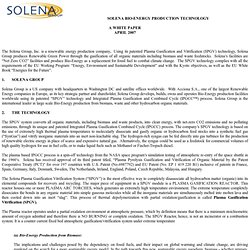 The SPGV technology complies with all the requirements of the EU Working Program: “Energy, Environment and Sustainable Development” and with the Kyoto objectives, as well as the EU White Book “Energies for the Future”. Solena Group is a US company with headquarters in Washington DC and satellite offices worldwide. Aitkin-County-Plasma-Gasification-Assessment-FINAL2.pdf (application/pdf Object) Plasma Plants Vaporize Trash While Generating Energy. Recently St. 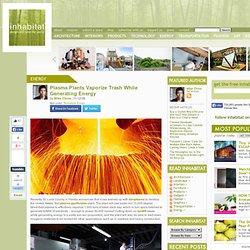 Lucie County in Florida announced that it has teamed up with Geoplasma to develop the United States’ first plasma gasification plant. The plant will use super-hot 10,000 degree fahrenheit plasma to effectively vaporize 1,500 tons of trash each day, which in turn spins turbines to generate 60MW of electricity – enough to power 50,000 homes! Cutting down on landfill waste while generating energy is a pretty win-win proposition, and the plant will also be able to melt down inorganic materials to be reused for other applications, such as in roadbed and heavy construction. Plasma gasification was invented by NASA 40 years ago to recreate re-entry temperatures for spacecraft. The process uses an electrical arc to heat up gas to form Plasma, which in turn breaks down waste. 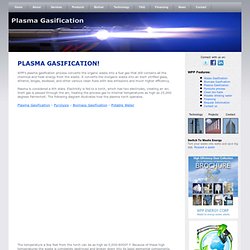 It converts the inorganic waste into an inert vitrified glass, ethanol, biogas, biodiesel, and other various clean fuels with less emissions and much higher efficiency. Plasma is considered a 4th state. Electricity is fed to a torch, which has two electrodes, creating an arc. Inert gas is passed through the arc, heating the process gas to internal temperatures as high as 25,000 degrees Fahrenheit. Gasification and Pyrolysis. Renewable Energy for the Average Joe! Plasma Gasification: Energy from our Trash. Plasma gasification is not just a technique that helps manage municipal waste through vaporization. 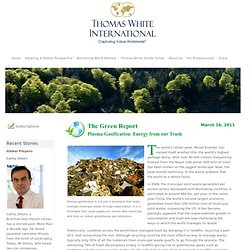 It is a technique that could supply our homes with electricity and help us reduce greenhouse gas emissions. The world’s tallest peak, Mount Everest, has earned itself another title: the world’s highest garbage dump. With over 40,000 visitors frequenting Everest from the Nepal side alone, 600 tons of trash has been strewn on the jagged landscape. Now, the peak stands testimony to the waste problem that the world as a whole faces. In 2008, the municipal solid waste generated per person across developed and developing countries is estimated at around 880 lbs. per year. Historically, countries across the world have managed trash by dumping it in landfills, recycling a part of it, and incinerating the rest. A new plasma gasification organic WtE plant for India. North Delhi Power (NDPL) will distribute energy from Solena-ABSi India Private’s (SAIP) plasma gasification bioenergy technology under a newly-formed agreement between the two companies. 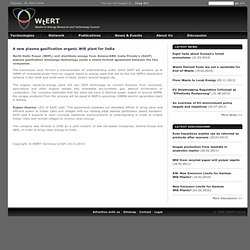 The businesses have formed a memorandum of understanding under which SAIP will produce up to 40MW of renewable power from an organic waste to energy plant that will be fed into NDPL’s distribution network in the north and north-west of Delhi, India’s second largest city. The organic waste-to-energy plant will use SAIP technology to convert biomass from municipal, agricultural and other organic wastes into renewable bio-synthetic gas, without incineration or combustion.

The company estimates that the plant will have a thermal power output of around 40MW. Bio-syngas produced from the process will be piped to NDPL’s upcoming 108MW electric generation plant in Rithala. The company was formed in 2008 as a joint venture of two US-based companies, Solena Group and ABSi, in order to bring clean energy to India. NUMBER OF HOUSEHOLDS AND FAMILIES FOR NEBRASKA CITIES. Plasma Gasification by Recovered Energy, Inc. Plasma arc waste disposal. Process[edit] A plasma torch uses an inert gas such as steam. 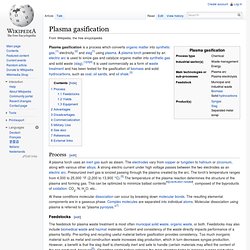 The electrodes vary from copper or tungsten to hafnium or zirconium, along with various other alloys. A strong electric current under high voltage passes between the two electrodes as an electric arc. Pressurized inert gas is ionized passing through the plasma created by the arc. The torch's temperature ranges from 4,000 to 25,000 °F (2,200 to 13,900 °C).[5] The temperature of the plasma reaction determines the structure of the plasma and forming gas. How much municipal solid waste does the US generate in a day.