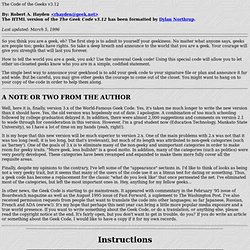 Hayden <rhayden@geek.net> The HTML version of the The Geek Code v3.12 has been formatted by Dylan Northrup. Last updated: March 5, 1996 So you think you are a geek, eh? Geek. Joseph Reagle on the gender gap in geek culture. Is geek culture sexist? 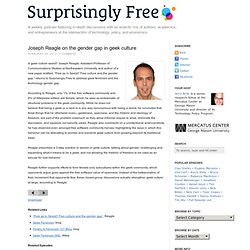 Joseph Reagle, Assistant Professor of Communications Studies at Northeastern University and author of a new paper entitled, “Free as in Sexist? Free culture and the gender gap,” returns to Surprisingly Free to address geek feminism and the technology gender gap. According to Reagle, only 1% of the free software community and 9% of Wikipedia editors are female, which he sees as emblematic of structural problems in the geek community. While he does not believe that being a geek or a nerd is in any way synonymous with being a sexist, he concludes that three things that he otherwise loves—geekiness, openness, and the rhetoric and ideology of freedom–are part of the problem inasmuch as they allow informal cliques to arise, dominate the discussion, and squeeze out minority views. 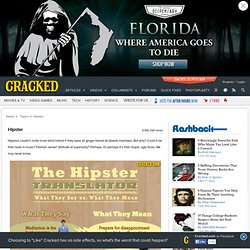 But why? Could it be their taste in music? Fashion sense? Attitude of superiority? The Hipster Alphabet. Unhappy Hipsters. The Hipsterfication Of America. Hide captionConcertgoers move in a spray of cooling mist as they dance amid the heat of the desert at the hipster Coachella Valley Music & Arts Festival in Indio, Calif., in April. 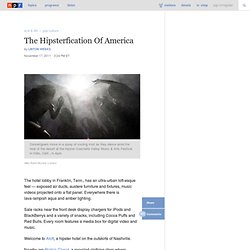 Mike Blake/Reuters /Landov Concertgoers move in a spray of cooling mist as they dance amid the heat of the desert at the hipster Coachella Valley Music & Arts Festival in Indio, Calif., in April. The hotel lobby in Franklin, Tenn., has an ultra-urban loft-esque feel — exposed air ducts, austere furniture and fixtures, music videos projected onto a flat panel.

Everywhere there is lava-lampish aqua and amber lighting. Sale racks near the front desk display chargers for iPods and BlackBerrys and a variety of snacks, including Cocoa Puffs and Red Bulls. Hipster-zine.pdf. Hipster Bingo Cards: “When You See, You’ll Know” Philadelphia-based graphic designer Paul Buller is selling these hilarious Hipster Bingo cards in his Etsy shop. 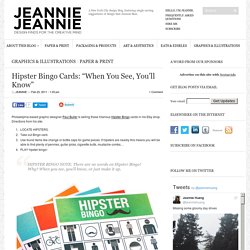 Directions from his site: LOCATE HIPSTERS.Take out Bingo card.Use found items like change or bottle caps for game pieces. If hipsters are nearby this means you will be able to find plenty of pennies, guitar picks, cigarette butts, mustache combs…PLAY hipster bingo! Mod/Hipster Clothing. The end of the hipster: how flat caps and beards stopped being so cool. Meet Josh. 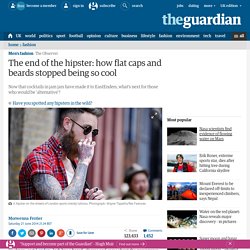 55 Steampunk Reads For The Holiday. The Steampunk Workshop. Steampunk Websites. Steampunk. Steampunk. On Thingpunk. The symbols of the divine initially show up at the trash stratum. — Philip K. 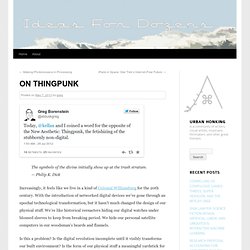 Dick Increasingly, it feels like we live in a kind of Colonial Williamburg for the 20th century. With the introduction of networked digital devices we’ve gone through an epochal technological transformation, but it hasn’t much changed the design of our physical stuff. We’re like historical reenacters hiding our digital watches under bloused sleeves to keep from breaking period.

We hide our personal satellite computers in our woodsman’s beards and flannels. Steampunk Tendencies. Clockwork Couture. Emerging Trends. Lumbersexuality and Its Discontents. One hundred years ago, a crisis in urban masculinity created the lumberjack aesthetic.

Now it's making a comeback. The first one I met was at an inauguration party in 2009. I was in a cocktail dress. What Goth Culture Looks Like Around The World. 26 Pictures That Show Just How Hardcore ’70s Punk Really Was. Photos of Five Decades of Club Kids. London is known for all sorts. 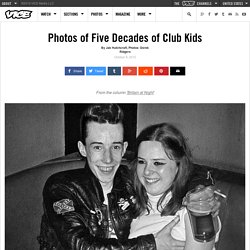 Its mawkish tourist attractions, its pie and mash shops, its diversity, its unparalleled destruction of everyone and everything that makes it so diverse. But it's also known for its nightlife, because although clubs may be dropping off faster than developers can acquire their deeds and build luxury flats in their place, the city still offers some of the best nights out in the world—just like it has done through all sorts of scenes and subcultures. Derek Ridgers, known for his Skinheads: 1979–1984 collection and his photos of Ibiza before the rave generation arrived, has been snapping the capital's club kids for the past five decades.

Over the years, the music they move to and the clothes peeling off their sweaty bodies may have changed, but the excitement and exhibitionism of clubbers in London remains the same.