Multi-party quantum communication now possible, physicists demonstrate. Photons generated in the lab were beamed to separate trailers in field on the University of Waterloo campus. 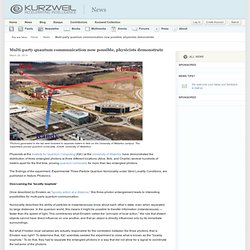 The experiment proved quantum nonlocality. (Credit: University of Waterloo) Physicists at the Institute for Quantum Computing (IQC) at the University of Waterloo have demonstrated the distribution of three entangled photons at three different locations (Alice, Bob, and Charlie) several hundreds of meters apart for the first time, proving quantum nonlocality for more than two entangled photons. The findings of the experiment, Experimental Three-Particle Quantum Nonlocality under Strict Locality Conditions, are published in Nature Photonics.

Overcoming the ‘locality loophole’ Once described by Einstein as “spooky action at a distance,” this three-photon entanglement leads to interesting possibilities for multi-party quantum communication. Nonlocality describes the ability of particles to instantaneously know about each other’s state, even when separated by large distances. A record quantum entanglement: 103 dimensions. An example of intensity distributions belonging to different modes of photons. 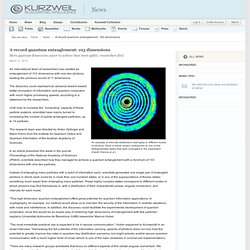 Each of these modes corresponds to one of the distinguishable states that were entangled in the experiment. (Credit: Krenna et al.) An international team of researchers has created an entanglement of 103 dimensions with only two photons, beating the previous record of 11 dimensions. The discovery could represent an advance toward toward better encryption of information and quantum computers with much higher processing speeds, according to a statement by the researchers. Until now, to increase the “computing” capacity of these particle systems, scientists have mainly turned to increasing the number of qubits (entangled particles), up to 14 particles. You can’t get entangled without a wormhole. Quantum entanglement is one of the more bizarre theories to come out of the study of quantum mechanics — so strange, in fact, that Albert Einstein famously referred to it as “spooky action at a distance.” 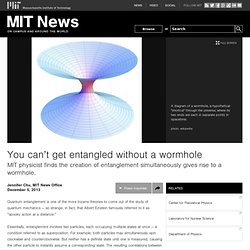 Essentially, entanglement involves two particles, each occupying multiple states at once — a condition referred to as superposition. For example, both particles may simultaneously spin clockwise and counterclockwise. But neither has a definite state until one is measured, causing the other particle to instantly assume a corresponding state. The resulting correlations between the particles are preserved, even if they reside on opposite ends of the universe. But what enables particles to communicate instantaneously — and seemingly faster than the speed of light — over such vast distances?

The theoretical results bolster the relatively new and exciting idea that the laws of gravity holding together the universe may not be fundamental, but arise from something else: quantum entanglement. Quantum Entanglement Holds DNA Together, Say Physicists. There was a time, not so long ago, when biologists swore black and blue that quantum mechanics could play no role in the hot, wet systems of life. 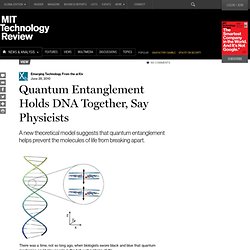 Since then, the discipline of quantum biology has emerged as one of the most exciting new fields in science. It’s beginning to look as if quantum effects are crucial in a number of biological processes, such as photosynthesis and avian navigation which we’ve looked at here and here. Spooky action put to order: Physicists classify different types of 'entanglement' A property known as "entanglement" is a fundamental characteristic of quantum mechanics. 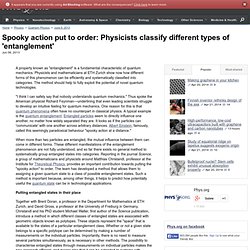 Physicists and mathematicians at ETH Zurich show now how different forms of this phenomenon can be efficiently and systematically classified into categories. The method should help to fully exploit the potential of novel quantum technologies. "I think I can safely say that nobody understands quantum mechanics. " Thus spoke the American physicist Richard Feynman—underlining that even leading scientists struggle to develop an intuitive feeling for quantum mechanics. One reason for this is that quantum phenomena often have no counterpart in classical physics. When more than two particles are entangled, the mutual influence between them can come in different forms.

Putting entangled states in their place. An infallible quantum measurement. Entanglement is a key resource for upcoming quantum computers and simulators. 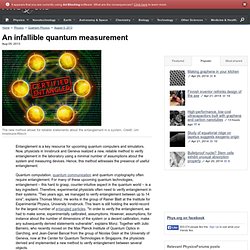 Finding correlations The presented device-independent method is based on a single assumption: "We only have to make sure that we always apply the same set of operations on the quantum objects, and that the operations are independent of each other", explains Julio Barreiro. Assumptions as Achilles heel. Entanglement in a flash (w/ video) (Phys.org) —JQI researchers under the direction of Chris Monroe have produced quantum entanglement between a single atom's motion and its spin state thousands of times faster than previously reported, demonstrating unprecedented control of atomic motion. 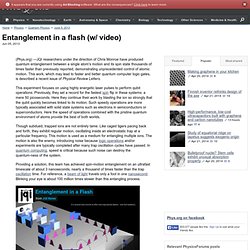 This work, which may lead to faster and better quantum computer logic gates, is described a recent issue of Physical Review Letters. This experiment focuses on using highly energetic laser pulses to perform qubit operations. Previously, they set a record for the fastest spin flip in these systems: a mere 50 picoseconds. Here they continue their work by blasting the ion so strongly that the qubit quickly becomes linked to its motion. Such speedy operations are more typically associated with solid state systems such as electrons in semiconductors or superconductors. Though subdued, trapped ions are not entirely tame.