119037 PUB P133525 PUBLIC 21 8 2017 16 46 30 CivicTechPeixotoSify. University of Denver. The MicroMob project aims to gather fine-grained data on who participates in mass protest events around the world. 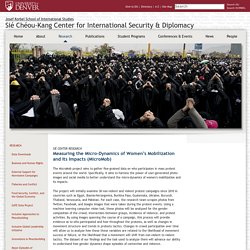 Specifically, it aims to harness the power of user-generated photo images and social media to better understand the micro-dynamics of women's mobilization and its impacts. The project will initially examine 30 non-violent and violent protest campaigns since 2010 in countries such as Egypt, Bosnia-Herzegovina, Burkina Faso, Guatemala, Ukraine, Burundi, Thailand, Venezuela, and Pakistan. For each case, the research team scrapes photos from Twitter, Facebook, and Google Images that were taken during the protest events. Using a machine learning computer vision tool, these photos will be analyzed for the gender composition of the crowd, interactions between groups, incidence of violence, and protest activities. 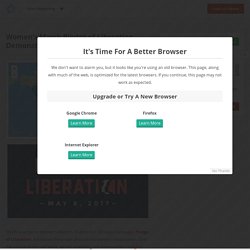 Over the course of the next week, we are mobilizing our communities to sign a Pledge of Liberation—a declaration of allegiance to each other. Together, activists around the country from every movement sector will unite on May 8 and hold demonstrations at in-district congressional offices and the offices of other elected officials. Women’s March, in partnership with ACLU People Power, United We Dream, Hollaback! , The Gathering for Justice, the National Lawyers Guild and other national and local partners, will take our resistance directly to our members of Congress.

We will send a clear message that we will rise up, together, against attacks on our health care, our identities, and our religious freedoms. We cannot pledge allegiance to an administration that oppresses and harms us. Join a demonstration near you or register your own event on 5/8. Main Home - SalamaTech Syria. Field Ready - Humanitarian Supplies Made-in-the-Field. 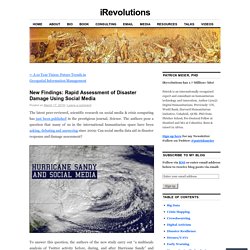 Build Up. [This post is part of a series on re-thinking conflict early warning.] 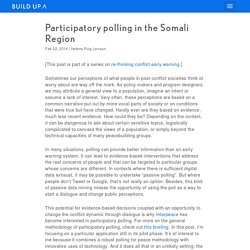 Sometimes our perceptions of what people in post-conflict societies think or worry about are way off the mark. As policy makers and program designers, we may attribute a general view to a population, imagine an intent or assume a lack of interest. Very often, these perceptions are based on a common narrative put out by more vocal parts of society or on conditions that were true but have changed. Hardly ever are they based on evidence, much less recent evidence. How could they be? In many situations, polling can provide better information than an early warning system. This potential for evidence-based decisions coupled with an opportunity to change the conflict dynamic through dialogue is why Interpeace has become interested in participatory polling. The primary platform that all three organizations are using is First Mile GEO. This is the international website of the berlin-based project ‘Flüchtlinge Willkommen’

Build Up. Anyone who follows events in Nigeria understands that the conflict environment is complex. 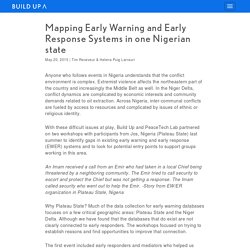 Extremist violence affects the northeastern part of the country and increasingly the Middle Belt as well. In the Niger Delta, conflict dynamics are complicated by economic interests and community demands related to oil extraction. Across Nigeria, inter-communal conflicts are fueled by access to resources and complicated by issues of ethnic or religious identity. With these difficult issues at play, Build Up and PeaceTech Lab partnered on two workshops with participants from Jos, Nigeria (Plateau State) last summer to identify gaps in existing early warning and early response (EWER) systems and to look for potential entry points to support groups working in this area.

An Imam received a call from an Emir who had taken in a local Chief being threatened by a neighboring community. Liking violence: A study of hate speech on Facebook in Sri Lanka. Launching the Humanitarian Information Dashboard. Blog post originally published on Current methods of collating and monitoring information in emergencies are time-intensive and do not allow us to track trends, gaps, or insights over time. 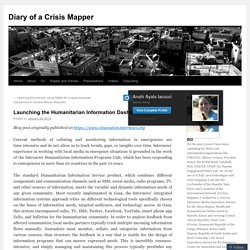 Internews’ experience in working with local media in emergency situations is grounded in the work of the Internews Humanitarian Information Programs Unit, which has been responding to emergencies in more than 20 countries in the past 10 years. Social Cohesion and Reconciliation (SCORE) Index. The SCORE index is designed to assess two components of peace in society. 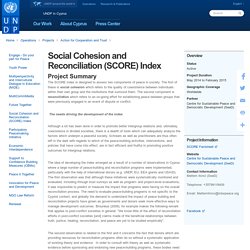 The first of these is social cohesion which refers to the quality of coexistence between individuals within their own group and the institutions that surround them. Barbera-polarization-social-media.pdf. 'Open Source' Resources for major Disaster & Emergency Management Situations. As everyone knows by now, the super storm known as 'Hurricane Sandy' has caused considerable devastation across the East Coast of the United States and all the way up to the Great Lakes region. 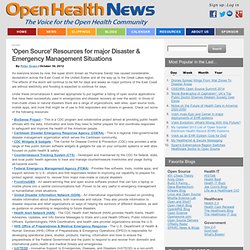 The effects of the storm will continue to be felt for days and weeks as major portions of the East Coast are without electricity and flooding is expected to continue for days. Under these circumstances it seemed appropriate to put together a listing of open source applications that have been successfully used in emergencies and disaster recovery all over the world. In times of man-made crises or natural disasters there are a range of organizations, web sites, open source tools, mobile apps, and more that might be of use to first responders and citizens in general. Check out some of the following resources: Please let us know about other Disaster & Emergency Management resources you would like to recommend to others.

SkyTruth Alerts: Daily reports of enviromental incidents in your back yard. ACLED. Open Event Data Alliance. Evaluating UAVs for Humanitarian Response. The Humanitarian UAV Network is carrying out an evaluation of UAVs and related technologies for use in humanitarian settings. 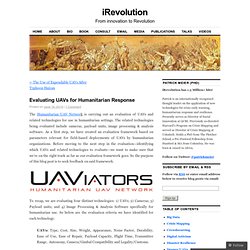 The related technologies being evaluated include cameras, payload units, image processing & analysis software. As a first step, we have created an evaluation framework based on parameters relevant for field-based deployments of UAVs by humanitarian organizations. Before moving to the next step in the evaluation—identifying which UAVs and related technologies to evaluate—we want to make sure that we’re on the right track as far as our evaluation framework goes.

So the purpose of this blog post is to seek feedback on said framework. To recap, we are evaluating four distinct technologies: 1) UAVs; 2) Cameras; 3) Payload units; and 4) Image Processing & Analysis Software specifically for humanitarian use. The GDELT Project: The Global Database of Events, Language, and Tone. Peacehub. A Useful Data Set on Political Violence that Almost No One Is Using. For the past 10 years, the CIA has overtly funded the production of a publicly available data set on certain atrocities around the world that now covers the period from January 1995 to early 2014 and is still updated on a regular basis. 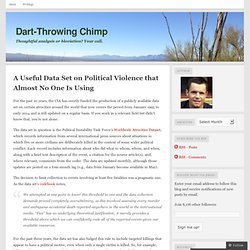 If you work in a relevant field but didn’t know that, you’re not alone. The data set in question is the Political Instability Task Force’s Worldwide Atrocities Dataset, which records information from several international press sources about situations in which five or more civilians are deliberately killed in the context of some wider political conflict. Each record includes information about who did what to whom, where, and when, along with a brief text description of the event, a citation for the source article(s), and, where relevant, comments from the coder. The data are updated monthly, although those updates are posted on a four-month lag (e.g., data from January become available in May). CCVRI-SSP-_ICT-and-ME-_Final. A computer-assisted personal interview (CAPI) platform. Open Source Research Tools. Tools and tactics for your digital security. Earth. FrontlineCloud.