MAJOR PERSONALITY STUDY FINDS THAT TRAITS ARE MOSTLY INHERITED. THE genetic makeup of a child is a stronger influence on personality than child rearing, according to the first study to examine identical twins reared in different families. 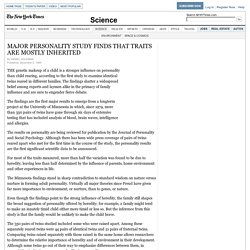 The findings shatter a widespread belief among experts and laymen alike in the primacy of family influence and are sure to engender fierce debate. The findings are the first major results to emerge from a longterm project at the University of Minnesota in which, since 1979, more than 350 pairs of twins have gone through six days of extensive testing that has included analysis of blood, brain waves, intelligence and allergies. The results on personality are being reviewed for publication by the Journal of Personality and Social Psychology. Although there has been wide press coverage of pairs of twins reared apart who met for the first time in the course of the study, the personality results are the first significant scientific data to be announced.

The 350 pairs of twins studied included some who were raised apart. It's nature, not nurture: personality lies in genes, twins study shows. By applying their answers to a well-established scale of psychological scale, researchers could assess and categorise different personality traits for each person. 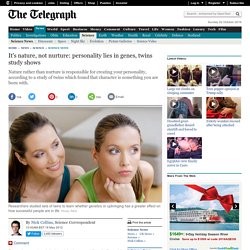 Writing in the Journal of Personality, the researchers found that identical twins were twice as likely as non-identical twins to share the same personality traits, suggesting that their DNA was having the greatest impact. Genetics were most influential on people's sense of self-control and also affected their social and learning abilities and their sense of purpose. Prof Timothy Bates, who led the study, said: "Previously, the role of family and the environment around the home often dominated people's ideas about what affected psychological wellbeing. However, this work highlights a much more powerful influence from genetics. " The study was focused on personality traits which contribute to our chances of success in life by dictating whether, for example, how determined we are to overcome challenges. The Pygmalion Effect: Robert Rosenthal's Study on the Power of Positive Expectations. Do you genes determine your entire life?

Whenever you read stories about identical twins separated at birth, they tend to follow the template set by the most remarkable of them all: the “two Jims”. 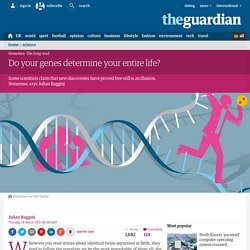 James Springer and James Lewis were separated as one-month-olds, adopted by different families and reunited at age 39. When University of Minnesota psychologist Thomas Bouchard met them in 1979, he found, as a Washington Post article put it, both had “married and divorced a woman named Linda and remarried a Betty. They shared interests in mechanical drawing and carpentry; their favourite school subject had been maths, their least favourite, spelling. They smoked and drank the same amount and got headaches at the same time of day.” The similarities were uncanny. Other studies at the world-leading Minnesota Center for Twin and Family Research suggest that many of our traits are more than 50% inherited, including obedience to authority, vulnerability to stress, and risk-seeking.

Many find this disturbing. Mischel’s Marshmallows. Through the Wormhole with Morgan Freeman. Beyond capitalism and socialism: could a new economic approach save the planet? To avoid social, environmental and economic collapse, the world needs to move beyond the standard choices of capitalism or socialism.

That’s the conclusion of a new report released Wednesday by US think tank Capital Institute. The non-partisan think tank argues that both systems are unsustainable, even if flawlessly executed, and that economists need to look to the “hard science of holism” to debunk outdated views held by both the left and the right. Jan Smuts, who coined the term “holism” in his 1926 book, Holism and Evolution, defined it as the “tendency in nature to form wholes that are greater than the sum of the parts”. For example, in the case of a plant, the whole organism is more than a collection of leaves, stems and roots.

Focusing too closely on each of these parts, the theory argues, could get in the way of understanding the organism as a whole. A long chain of cause and effects A radical shift This holistic approach flies in the face of a great deal of long-held beliefs.