Saturn's moon Prometheus is shaping the rings of dust around the planet. The gravitational forces from Saturn's moons are much smaller than that of the planet, but even small nudges from individual moons can tweak the particles in its rings - constantly altering the patterns within them. 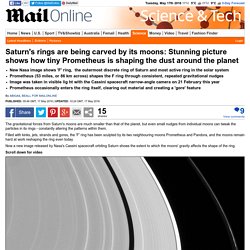 Sometimes it can be difficult to understand how big things in space really are. Spectacular black and white pictures show the best views of Saturn's rings ever captured by space probe. By Daily Mail Reporter Published: 05:55 GMT, 15 July 2012 | Updated: 11:12 GMT, 16 July 2012 These stunning black and white photographs look like the result of a particularly creative art project. But in fact they are part of a scientific mission - and they were captured not by an artist, but by a satellite orbiting the planet Saturn. Scientists discover tropical lake of methane gas on Saturn's largest moon Titan.

It was previously believed that bodies of liquid could not exist at Titan's midsection because energy from the sun would cause pools to evaporate By Daily Mail Reporter Published: 02:54 GMT, 14 June 2012 | Updated: 07:15 GMT, 14 June 2012 Scientists have discovered a methane-rich tropical lake and several ponds near the equator of Saturn's largest moon Titan. 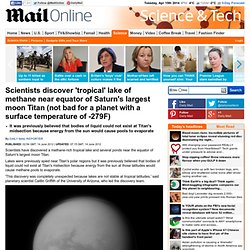 Lakes were previously spied near Titan's polar regions but it was previously believed that bodies of liquid could not exist at Titan's midsection because energy from the sun at those latitudes would cause methane pools to evaporate. 'This discovery was completely unexpected because lakes are not stable at tropical latitudes,' said planetary scientist Caitlin Griffith of the University of Arizona, who led the discovery team.

Stunning images that show the incredible colours of the changing seasons on Saturn. Pictures show the changing colours of Saturn's northern and southern hemispheres as they pass from one season to the nextTaken by Cassini, which has spent eight years circling Saturn By Eddie Wrenn Published: 08:23 GMT, 31 August 2012 | Updated: 13:22 GMT, 31 August 2012 Nasa has returned some of the most stunning true-colour images of Saturn, showing the planet suspended in eternal beauty alongside its largest moon. 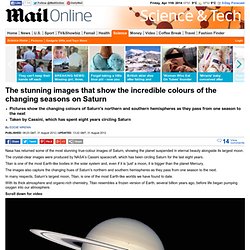 The crystal-clear images were produced by NASA's Cassini spacecraft, which has been circling Saturn for the last eight years. Titan is one of the most Earth-like bodies in the solar system and, even if it is 'just' a moon, it is bigger than the planet Mercury. The images also capture the changing hues of Saturn's northern and southern hemispheres as they pass from one season to the next. In many respects, Saturn's largest moon, Titan, is one of the most Earth-like worlds we have found to date. Scroll down for video Volcanism may occur as well, but with liquid water as the lava. Cassini: First pictures of Earth taken from NASA spacecraft orbiting Saturn. Photos taken from Saturn by Nasa's Cassini spacecraft show Earth as a tiny pale blue dotThe images have been transmitted from 898 million miles away on the outer edge of our solar system By Michael Zennie Published: 03:44 GMT, 22 July 2013 | Updated: 00:41 GMT, 28 July 2013. 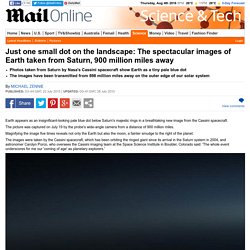 Plastic found in space: Cassini finds propylene on Saturn's moon Titan- the first time it has been discovered in another world. Discovery could help us better understand how chemistry works on TitanScientists claim this is similar to how chemistry operated on ancient EarthProbes had previously failed to identify propylene because its chemical signature was overshadowed by other, much stronger, chemicalsBy Ellie Zolfagharifard Published: 10:13 GMT, 1 October 2013 | Updated: 11:50 GMT, 28 October 2013 You would expect to find plastic in your lunchbox, not on Saturn’s distant moon Titan. 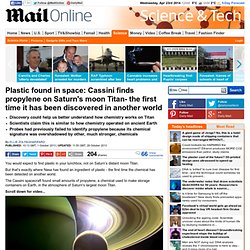 Saturn's HEXAGONAL storm system is revealed in true colour for the first time. Hexagon shape is created by a band of upper-atmospheric winds on SaturnImages, up until now, have shown it in false-colour infrared wavelengthsIn April, the Cassini spacecraft provided scientists with the first close-up views of a behemoth hurricane swirling within it By Ellie Zolfagharifard Published: 11:20 GMT, 17 October 2013 | Updated: 14:17 GMT, 17 October 2013 The mysterious six-sided storm on Saturn’s North Pole has long captivated astronomers. 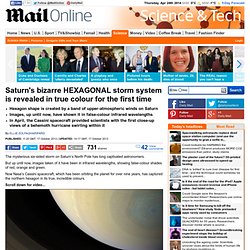 These Are the Most Epic Pictures of Saturn You've Ever Seen.