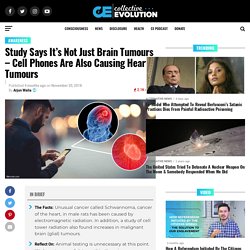 After adopting a 'mucus-free' lifestyle, a diet rich in fresh fruit and vegetables, she cured her depression, anxiety, and health issues.Reflect On:True healing takes time and commitment, and a willingness to face the emotions and trauma buried beneath our eating habits. In 2011, Livia Macdonald was looking for answers to her health. At nearly 300 lbs and stuck in the despairs of chronic illness, she was ready to make a big change. The first step—divorcing allopathic medicine all together.

Like many others stepping away from conventional medicine, Livia found herself enveloped by the siren of holistic healthcare, adopting the protocols laid out by natural-health celebrity and functional medicine doctor, Mark Hyman. Following Hyman’s vitality guidelines, Livia cut out grains, starches, and processed sugars, while incorporating more vegetables, ‘healthy’ fats and animal products into her diet. BILLIONS of dead fish now washing up in Alaska from radiation-polluted Pacific Ocean. Hell Hole on Earth Discovered at Fukushima - Radiation Levels Unimaginable - ORGANIC AND HEALTHY.

At Chernobyl and Fukushima, Radioactivity Has Seriously Harmed Wildlife. White storks on road near Chernobyl, Ukraine. 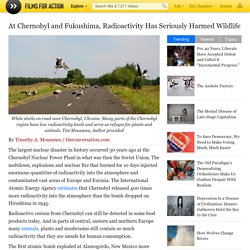 Many parts of the Chernobyl region have low radioactivity levels and serve as refuges for plants and animals. Tim Mousseau, Author provided By Timothy A. Mousseau / theconversation.com The largest nuclear disaster in history occurred 30 years ago at the Chernobyl Nuclear Power Plant in what was then the Soviet Union. Radioactive cesium from Chernobyl can still be detected in some food products today. Never-Before-Seen Images Reveal How The Fukushima Exclusion Zone Was Swallowed By Nature.

Polish photographer Arkadiusz Podniesinski travelled to the site of the Fukushima nuclear disaster last month to see the location with his own eyes. 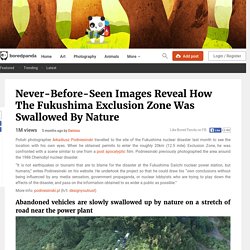 When he obtained permits to enter the roughly 20km (12.5 mile) Exclusion Zone, he was confronted with a scene similar to one from a post apocalyptic film. Podniesinski previously photographed the area around the 1986 Chernobyl nuclear disaster. “It is not earthquakes or tsunami that are to blame for the disaster at the Fukushima Daiichi nuclear power station, but humans,” writes Podniesinski on his website. Ten Most Radioactive Places on Earth. While the 2011 earthquake and worries surrounding Fukushima have brought the threat of radioactivity back into the public consciousness, many people still don't realize that radioactive contamination is a worldwide danger. Radionuclides are in the top six toxic threats as listed in the 2010 report by The Blacksmith Institute, an NGO dedicated to tackling pollution.

You might be surprised by the locations of some of the world’s most radioactive places — and thus the number of people living in fear of the effects radiation could have on them and their children. 10. Hanford, USA The Hanford Site, in Washington, was an integral part of the US atomic bomb project, manufacturing plutonium for the first nuclear bomb and "Fat Man," used at Nagasaki. 9. 8. Cumbrian nuclear dump 'virtually certain' to be eroded by rising sea levels. Britain's nuclear dump is virtually certain to be eroded by rising sea levels and to contaminate the Cumbrian coast with large amounts of radioactive waste, according to an internal document released by the Environment Agency (EA). 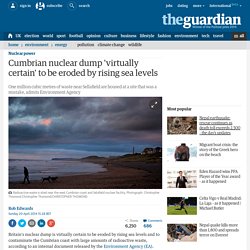 This Is What The World Would Look Like If Cell Phone Radiation Was Visible. This Video Is Shocking The Entire World. Everyone Needs To See This! In 2011, an earthquake caused a tsunami that killed nearly 16,000 people in Japan and caused an estimated 210 billion dollars in damage, making it one of the costliest natural disasters in history. 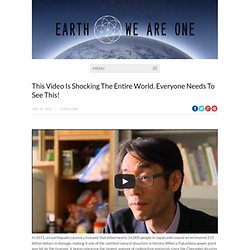 When a Fukushima power plant was hit by the tsunami, it began releasing the largest amount of radioactive materials since the Chernobyl disaster of 1986. Smart Meter Radiation Observable Effects - Live Blood Analysis. Utility companies all over the world are replacing electricity, gas and water meters with wireless “smart” meters at an unprecedented rate. 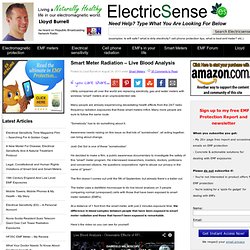 Many people are already experiencing devastating health effects from the 24/7 radio frequency radiation exposures that these smart meters inflict. Many more people are sure to follow the same route. “Somebody” has to do something about it. Awareness needs raising on this issue so that lots of “somebodies”, all acting together, can bring about change. Fukushima: The Shocking Truth of What’s Really Happening. I just came across this report on RT about the alarming Fukushima situation. 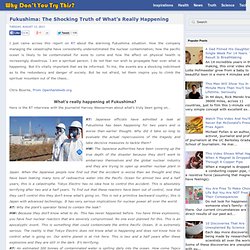 How the company managing the catastrophe have consistently underestimated the nuclear contamination; how the pacific ocean is likely to be contaminated for eons to come and how the affect on physical health is increasingly disastrous. I am a spiritual person. I do not fear nor wish to propagate fear over what is happening. This Is What The World Would Look Like If Cell Phone Radiation Was Visible. It shocks many people to discover that less than 1 percent of the electromagnetic spectrum is visible to the human eye. 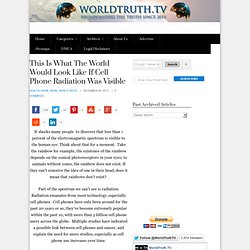 Think about that for a moment. The dead trees and fallen leaves near Chernobyl aren’t decaying. It’s been nearly 30 years since the catastrophe at Chernobyl, and as the cleanup grinds on, the far-reaching effects continue to be documented. 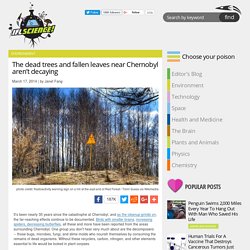 Birds with smaller brains, increasing spiders, decreasing butterflies, all these and more have been reported from the areas surrounding Chernobyl. One group you don’t hear very much about are the decomposers -- those bugs, microbes, fungi, and slime molds who nourish themselves by consuming the remains of dead organisms. Without these recyclers, carbon, nitrogen, and other elements essential to life would be locked in plant corpses. The effects of radioactive contamination on the decay of plant material remains unknown… until now. Scientists examining the forests around Chernobyl have found that radioactive contamination has reduced the rate of litter mass loss. To test this, the team filled 572 small mesh bags with dry leaves from four species of trees -- oak, maple, birch, pine -- collected from uncontaminated sites.

Time lapse map of every nuclear explosion ever on Earth.