Developing Human Connectome Project (dHCP) Sleepy? These neurons may be responsible. The science of magic tricks: From misdirection to 'pausing' time, experts reveal how illusions mess with our minds. A magician must make a trick look effortless, but it's very unlikely that anything is casual or spontaneous in a magic show. 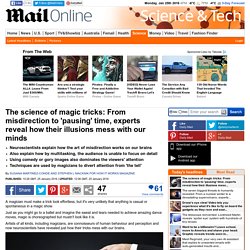 Cocaine addicts may have difficulty controlling their dependence because a 'back door' into the brain bypasses their self-control and leads straight to habitual behaviour, scientists believe. 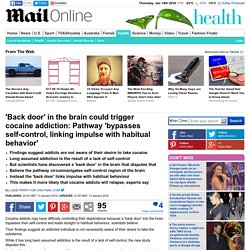 Their findings suggest an addicted individual is not necessarily aware of their desire to take the substance. While it has long been assumed addiction is the result of a lack of self-control, the new study disputes this. Stanford psychologist's 18-month study of his own brain reveals surprises. Stanford Report, December 9, 2015 Russell Poldrack scanned his brain to create the most detailed map of brain connectivity ever. 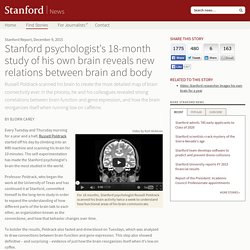 In the process, he and his colleagues revealed strong correlations between brain function and gene expression, and how the brain reorganizes itself when running low on caffeine. By Bjorn Carey Video by Kurt Hickman. Stanford University researcher uses MRI scans to show the effect of coffee. Everybody has their own morning routine; for one researcher, this included hopping in to an MRI to scan his brain. 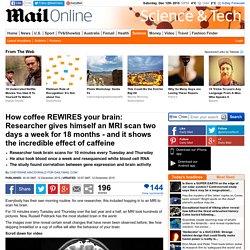 For 10 minutes every Tuesday and Thursday over the last year and a half, an MRI took hundreds of pictures. Now, Russell Poldrack has the most studied brain in the world. The images over time reveal certain small changes that have never been observed before, like how skipping breakfast or a cup of coffee will alter the behaviour of your brain. Scroll down for video. Working memory: Underlying processes are more complex than we thought. 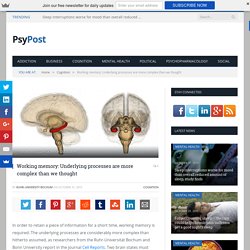 Different brain regions are involved in this process, including the hippocampus, which is known for its crucial role in long-term memory. The team headed by Prof Dr Nikolai Axmacher from the Institute of Cognitive Neuroscience in Bochum and Marcin Leszczynski, researcher in Bochum and at the Department of Epileptology at Bonn University, studied rhythmic activity patterns in the hippocampus while the subjects memorised sequences of numbers or faces. Two activity states at semi-second intervals.

Scientists reduce belief in God by shutting down the brain's medial frontal cortex. New research involving a psychologist from the University of York has revealed for the first time that both belief in God and prejudice towards immigrants can be reduced by directing magnetic energy into the brain. 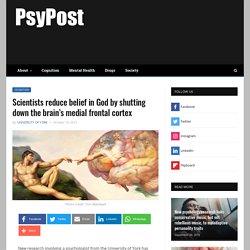 Dr Keise Izuma collaborated with a team from the University of California, Los Angeles (UCLA), to carry out an innovative experiment using transcranial magnetic stimulation, a safe way of temporarily shutting down specific regions of the brain. Emotion - The Psychology of Emotion. If you ask someone to describe what an emotion is, they might say it is a feeling, sentiment, reaction, passion, excitement, or sensation. 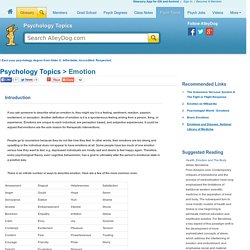 Another definition of emotion is it is a spontaneous feeling arising from a person, thing, or experience. Emotions are unique to each individual, are perception based, and subjective experiences. It could be argued that emotions are the sole reason for therapeutic interventions. People go to counselors because they do not like how they feel. In other words, their emotions are too strong and upsetting or the individual does not appear to have emotions at all. There is an infinite number or ways to describe emotion. Theories of Emotion. Emotions exert anincredibly powerful force on human behavior. 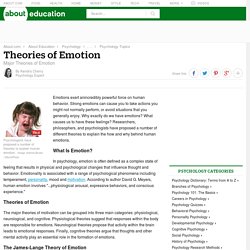 Strong emotions can cause you to take actions you might not normally perform, or avoid situations that you generally enjoy. Why exactly do we have emotions? What causes us to have these feelings? Researchers, philosophers, and psychologists have proposed a number of different theories to explain the how and why behind human emotions. What Is Emotion? Cognitive Psychology and Cognitive Neuroscience/Motivation and Emotion. Introduction[edit] Happiness, sadness, anger, surprise, disgust and fear. 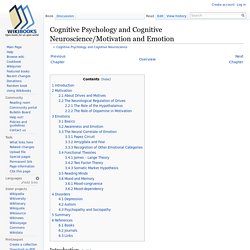 All these words describe some kind of abstract inner states in humans, in some cases difficult to control. We usually call them feelings or emotions. But what is the reason that we are able to "feel"? Where do emotions come from and how are they caused?

The Brain in Nature magazine

Articles on the Brain in New Scientist. The Brain in Discover magazine. The Brain in MIT Technology Review. Articles on the Brain in the Daily Mail. Brain Notes. The Brain: When things go wrong. Scientists recreate ghosts, or, strange phenomenon in the lab. Swiss researchers carried out an experiment to make artificial 'ghosts'The sensation was re-created by researchers using a robot to interfere with the sensory signals in the brains of blindfolded volunteers By Mark Prigg For Dailymail.com Published: 17:25 GMT, 29 April 2015 | Updated: 17:42 GMT, 29 April 2015. 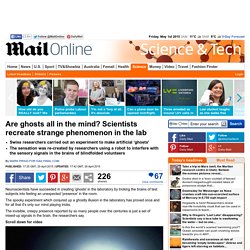 Gene that makes human brain unique identified by scientists. A strand of DNA that lies at the heart of what makes humans unique in the animal kingdom has been identified by researchers in Germany. Scientists in Dresden found a gene that drives the expansion of the human brain and helps to make it the most complex structure in the universe. Researchers believe the gene plays a pivotal role in human cognition by ramping up dramatically the number of neurons in the neocortex, a brain region that is central to reasoning, language and sensory perception.

The gene is found in modern humans, but was also carried by neanderthals, who had brains at least as large as ours, and the mysterious Denisovans, a group of human ancestors known only from a few bone fragments in Siberia. Parkinson’s and depression drugs can alter moral judgment, study shows. Common drugs for depression and Parkinson’s can sway people’s moral judgments about harming others, according to research that raises ethical questions about the use of the drugs. The study found that when healthy people were given a one-off dose of a serotonin-boosting drug widely used to treat depression they became more protective of others, paying almost twice as much to prevent them receiving an electric shock in a laboratory experiment. They also became more reluctant to expose themselves to pain.

The scientists also found that the dopamine-enhancing Parkinson’s drug, levodopa, made healthy people more selfish, wiping out the normal tendency to prefer to receive an electric shock themselves, while sparing those around them. Brain scans reveal what happens during an out-of-body experience  Neuroscientist used video headsets to trick volunteers into believing they were looking out from a stranger's bodySpecific regions of the brain lit up during the out-of-body experienceNeurons called 'place cells' appeared to also play a role in the illusionIt suggests abnormal brain activity may lie behind out-of-body experiences By Richard Gray for MailOnline Published: 12:54 GMT, 1 May 2015 | Updated: 17:30 GMT, 1 May 2015 They have been interpreted as evidence of the existence of a soul and even life after death, but now scientists may have unravelled what is going on when people have out-of-body experiences.

Researchers devised a devious experiment to trick volunteers into thinking they had left their own body while undergoing brain scans. Train Your Brain To Let Go Of Habits – 10 Methods For Creating New Neural Pathways. When you understand how neural pathways are created in the brain, you get a front row seat for truly comprehending how to let go of habits. Neural pathways are like superhighways of nerve cells that transmit messages.

You travel over the superhighway many times, and the pathway becomes more and more solid. Human brain. The human brain has the same general structure as the brains of other mammals, but has a more developed cortex than any other. Large animals such as whales and elephants have larger brains in absolute terms, but when measured using the encephalization quotient which compensates for body size, the human brain is almost twice as large as the brain of the bottlenose dolphin, and three times as large as the brain of a chimpanzee.

Much of the expansion comes from the part of the brain called the cerebral cortex, especially the frontal lobes, which are associated with executive functions such as self-control, planning, reasoning, and abstract thought. The portion of the cerebral cortex devoted to vision is also greatly enlarged in humans. Brain: Multiple contacts are key to synapse formation. New regulator discovered for information transfer in the brain. The protein mSYD1 has a key function in transmitting information between neurons. Communication problems in the brain. For brain cells to communicate, the contacts to each other must function. The Whole Brain Atlas. 10 Things You Didn't Know About the Brain.

Neil Burgess: How your brain tells you where you are. Explore the Brain and Mind - BrainFacts.org. Mapping the Brain. Nuts and Bolts the neuron. A single neuron may be connected to as many as 200 000 others, via junctions called synapses. They form an extensive network throughout the body, and can transmit signals at speeds of 100 metres per second.

Induction: The Making of a Neuron. Even more astonishing is that this process takes place as the embryo is developing. Induction and proliferation are followed by migration, during which the newly formed neurons travel to their final destination. Throughout life, the nervous system is active, making new connections and fine-tuning the way messages are sent and received.

Neurons: A Curious Collection of Shapes and Sizes. Like blood, liver, muscle, and other body cells, neurons have an outer membrane, a nucleus, and smaller structures called organelles that perform important functions. But neurons also have something other cells don’t: highly complex extensions called dendrites and axons that transport electrical and chemical messages in and out of the cell, enabling neurons to communicate with one another with incredible speed and precision. The intricate branches, or arbors, of these extensions are what give neurons their beautifully strange and varied shapes. Dendrite arbors, for example, make some neurons look like sea coral, others like spider webs, and still others like round balls of tumbleweed. Neuron Conversations: How Brain Cells Communicate. Neurons and Memory. Whenever I read about someone diagnosed with Alzheimers who apparently goes in and out of the memory problems it makes me wonder how carefully they were diagnosed.

Mirror Neurons. Complexity of single neurons? Physics Forums. Neurotransmitters: How Brain Cells Use Chemicals to Communicate. Glia: the Other Brain Cells. Mystery of the Human Brain's Glia Cells Solved. Mapping Brain Circuits. Brain Evolution: Neurogenomics Targets the Genes That Make Us Human. The Human Brain Atlas at Michigan State University. Did a Copying Mistake Build Man's Brain? Brain Scans Show Who You're Thinking About. The Invisible Hand Illusion. Brain damage can make people immune to the gambler’s fallacy. Sex or Attachment: Why Do We Fall in Love, Really? By Bonnie Williams. Allen Brain Atlas: Human Brain. Debunked: Memory-Molecule Theory. Scientists Cast Light Onto Roots of Illness Deep in the Brain. Spurious Positive Mapping of the Brain? Brain scan breakthrough show researches just what you're thinking about and could lead to treatment for disorders like autism.

How to Make Your Own Evil Twin. Researchers map Phineas Gage's pierced brain. How the Brain Creates and Uses Personality Models to Predict Behavior. The brain's emergency response call. Vaughan Bell: the trouble with brain scans. Brain Not Required For Antidepressant To Act. Brain Cells Know Which Way You'll Bet. A surprise makes memories wobbly. Brainbow: See the brain in different lights. Paralyzed Patient Swills Coffee by Issuing Thought Commands to a Robot. Been Thinking of Somebody? Brain Researchers Know Who. Neurons never forget a face. The Brain May Disassemble Itself in Sleep. Is There a Difference between the Brain of an Atheist and the Brain of a Religious Person? Why is it Impossible to Stop Thinking, to Render the Mind a Complete Blank? Buff Your Brain. The Split Brain Experiments : Games from Nobelprize.org. Brain and Behavior Student Site. Why we forget. Slacker or go-getter? Brain chemical may tell.