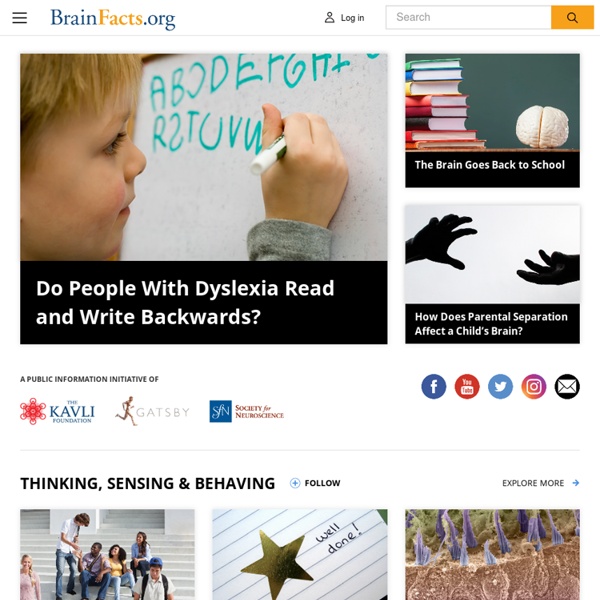 Neuron All neurons are electrically excitable, maintaining voltage gradients across their membranes by means of metabolically driven ion pumps, which combine with ion channels embedded in the membrane to generate intracellular-versus-extracellular concentration differences of ions such as sodium, potassium, chloride, and calcium. Changes in the cross-membrane voltage can alter the function of voltage-dependent ion channels. If the voltage changes by a large enough amount, an all-or-none electrochemical pulse called an action potential is generated, which travels rapidly along the cell's axon, and activates synaptic connections with other cells when it arrives. Neurons do not undergo cell division.

Eye Movements Do Not Reveal Lying: Scientific American Podcast The eyes are the windows to the soul. As such they can reveal if someone is lying, right? Cop shows, advice shows, even some organizational training courses hold that if somebody looks up and to the right, they’re probably lying. Up and to the left means they’re telling the truth. Transcript of the Constitution of the United States - Official Text The Constitution of the United States: A Transcription Note: The following text is a transcription of the Constitution as it was inscribed by Jacob Shallus on parchment (the document on display in the Rotunda at the National Archives Museum.) Items that are hyperlinked have since been amended or superseded. The authenticated text of the Constitution can be found on the website of the Government Printing Office. We the People of the United States, in Order to form a more perfect Union, establish Justice, insure domestic Tranquility, provide for the common defence, promote the general Welfare, and secure the Blessings of Liberty to ourselves and our Posterity, do ordain and establish this Constitution for the United States of America. Article.

Explore the nervous system you are here: home > explore Neuroscience For Kids explore table of contents The World of Neuroscience Brain Atlas - Introduction The central nervous system (CNS) consists of the brain and the spinal cord, immersed in the cerebrospinal fluid (CSF). Weighing about 3 pounds (1.4 kilograms), the brain consists of three main structures: the cerebrum, the cerebellum and the brainstem. Cerebrum - divided into two hemispheres (left and right), each consists of four lobes (frontal, parietal, occipital and temporal). The outer layer of the brain is known as the cerebral cortex or the ‘grey matter’. It covers the nuclei deep within the cerebral hemisphere e.g. the basal ganglia; the structure called the thalamus, and the ‘white matter’, which consists mostly of myelinated axons.

What Happens to Consciousness When We Die Where is the experience of red in your brain? The question was put to me by Deepak Chopra at his Sages and Scientists Symposium in Carlsbad, Calif., on March 3. A posse of presenters argued that the lack of a complete theory by neuroscientists regarding how neural activity translates into conscious experiences (such as redness) means that a physicalist approach is inadequate or wrong. The idea that subjective experience is a result of electrochemical activity remains a hypothesis, Chopra elaborated in an e-mail. It is as much of a speculation as the idea that consciousness is fundamental and that it causes brain activity and creates the properties and objects of the material world. Where is Aunt Millie's mind when her brain dies of Alzheimer's?

Iraqi Civil Society Solidarity Initiative (ICSSI) Policy Paper Presented to the Iraqi Government on the legal possibilities available to Iraq to respond to the threat posed by the Ilisu Dam. Author: Save the Tigris and Iraqi Marshes Campaign Baghdad, 22-03-2014 Making Sense of the World, Several Senses at a Time Our five senses–sight, hearing, touch, taste and smell–seem to operate independently, as five distinct modes of perceiving the world. In reality, however, they collaborate closely to enable the mind to better understand its surroundings. We can become aware of this collaboration under special circumstances. Mars Exploration Program: Mars for Educators You can participate in four major programs: Curriculum Supplements Robotics activities are available. Download the activity summaries (PDF, 1.33 MB) or the full activity set (PDF, 1.08 MB). The Mars Curriculum Modules are designed to help bring the topic of Mars into your 4th through 12th grade classrooms. Exploring Mars (Grades 4-10)